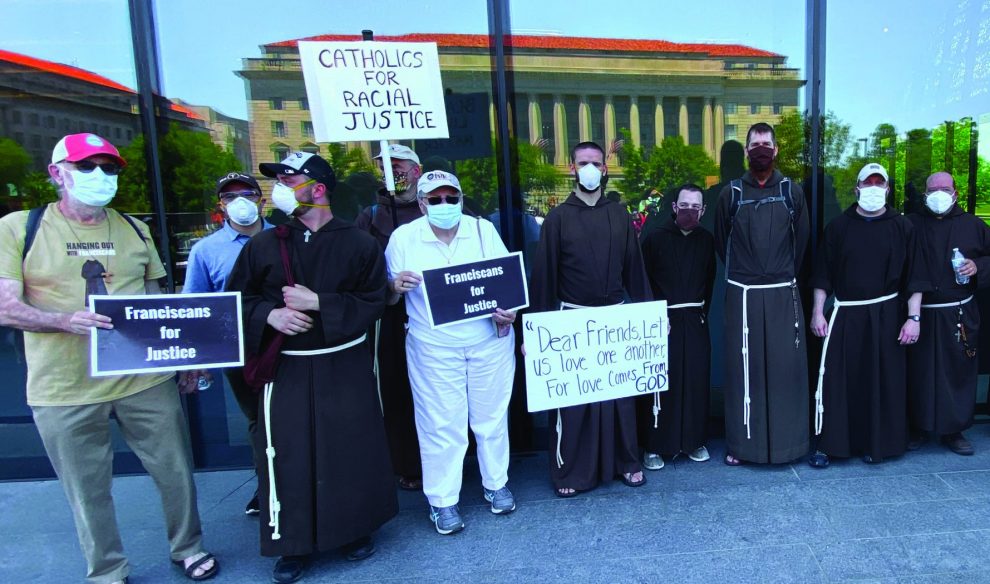 This summer, I joined hundreds of other Catholics in pro-life demonstrations around the White House. We were there to bear witness to the nation as faithful Catholics that Black lives matter. The deaths of George Floyd, Breonna Taylor, and Ahmaud Arbery demanded pro-life witness. My sign, literally about the breath of life, read, “I Can’t Breathe.”

As the executive director of the Franciscan Action Network, I was proud to see so many Franciscans—nuns, friars, and secular Franciscans—standing shoulder to shoulder in solidarity with the thousands marching and calling for racial justice. Other Catholics there included bishops and Jesuits, Maryknollers, Columbans, Oblates of Mary, Dominicans, and Sisters of Mercy. With us too were Catholics from Catholic Charities and Catholic Relief Services, friends from the Catholic Worker Movement, friends from Pax Christi, staff from the U.S. Conference of Catholic Bishops and from the Archdiocese of Washington, D.C., faculty from Catholic universities, and parishioners from dozens of Washington-area churches.

Although we were only hundreds among the thousands protesting, I have never been so proud to be a pro-life Catholic.

This, however, is not even close to what most people understand about being pro-life. Partly, I suspect, that’s because of the calendar. The year 2020 is an election year, and each election year sees the term pro-life weaponized among American Catholics for political effect. When deployed politically, the term is reduced to meaning merely opposition to laws and policies that allow or enable women to choose abortion and, by extension, opposition to politicians who allow such laws. The possibility of a pro-life theology is undercut when the term is twisted into a wedge issue in America’s culture wars.

The possibility of a pro-life theology is undercut when the term is twisted into a wedge issue in America’s culture wars.

Contrary to its political use, a pro-life theology is a spiritually rich understanding of creation that finds in the cherishing and tending of God’s handiwork a compelling appreciation of the mysteries and purpose of the divine plan. To be pro-life is to see the hand of the divine artist ever at work in creation and to be moved to treasure it.

The pro-life truth that life is sacred begins with an understanding that the universe in all its magnificence is God’s creation. Like an artist, God crafted our world for a divine plan, and everything bears the fingerprints of the intent of that divine artistry. Each birth of life reminds us of the unfolding of the divine plan itself. In this sense, to be pro-life means to be aware of, cherish, respect, protect, and promote the Creator’s plan and purpose in the world, in all life, and in human life. To live a pro-life theology is to seek to discern that divine plan in all things and to be in service to it. A humility and an overcoming of the self are required to put the purposes of God ahead of choosing self-interest.

An erroneous pro-life attitude is one that sees human life as the center and measure of all things.

This requires looking at creation not as something apart from us and certainly not as something below us—but akin to how St. Francis of Assisi symbolically spoke of all created things as a family of which we are a part, with birds as brothers, the rain as sister, and the Earth itself as mother.

An erroneous pro-life attitude is one that sees human life as the center and measure of all things. We see this error even in a typical division in our church communities where those committees named pro-life focus only on human bodily life at the beginning and end of life, as if the life of the planet or the justice issues of social life are optional. The idea that everything is about the human person is also too often the meme for political use of the term pro-life.

It should be recognized that this same erroneous focus on the individual is also the focus of some pro-choice defenders of reproductive rights. There is a prideful vanity in this turn, one that is at odds with the gospels and at odds with a correct understanding of the term pro-life. By shifting the focus of pro-life from the human body to the divine plan in all of creation, its theological sweep becomes evident and compelling.

Rather, to be pro-life is to rejoice in and appreciate the beauty, meaning, and purpose of the whole of creation and the intentions of the Creator. We see then why we are morally obliged to address any corruption, distortion, and denial of those intentions. The life of the unborn child has purpose in the plan of creation to live, flourish, love, be in solidarity with others, make the world a better place, and be in communion with all creation to glorify God. So too does the life of one convicted on death row. It is wrong to deny even the last moments in life when possibilities remain for one more moment of participation in the divine plan.

A seamless garment encompassing the entirety of the church’s moral social teachings, a pro-life theology lifts up all of creation in celebration of the plan of the divine artist who crafted it from nothing.

So, yes, to be pro-life is to oppose abortion. But opposing racism is also pro-life. Opposing poverty is pro-life. Opposing border walls, opposing LGBTQ discrimination, and opposing misogyny are all pro-life. To be pro-life is to reject the death penalty and to work for restorative justice. It is to be for economic justice, for health care for everyone, for housing for everyone, for good education for all, for good jobs. It is to be for peace and against war. It is to work for clean air, clean water, the preservation of species, and an end to human-caused climate change. It is to shout outside the gates of the White House that Black lives matter.

Adjacent to St. John’s Episcopal Church, where President Trump a few days before our protest had directed tear gas, flash-bangs, and riot police to push back demonstrators so that he could have his photo op with a Bible, several priests of the Archdiocese of Washington organized a prayer service outside the police barriers surrounding Lafayette Square. Bishop Mario Dorsonville, an auxiliary bishop of the archdiocese, led us through readings from scripture. As we finished the prayers and began a symbolic march to the National Museum of African American History and Culture, I overheard someone in the crowd remark, “Catholics are here? I thought they were just pro-life.”

Results are based on survey responses from 531 USCatholic.org visitors.