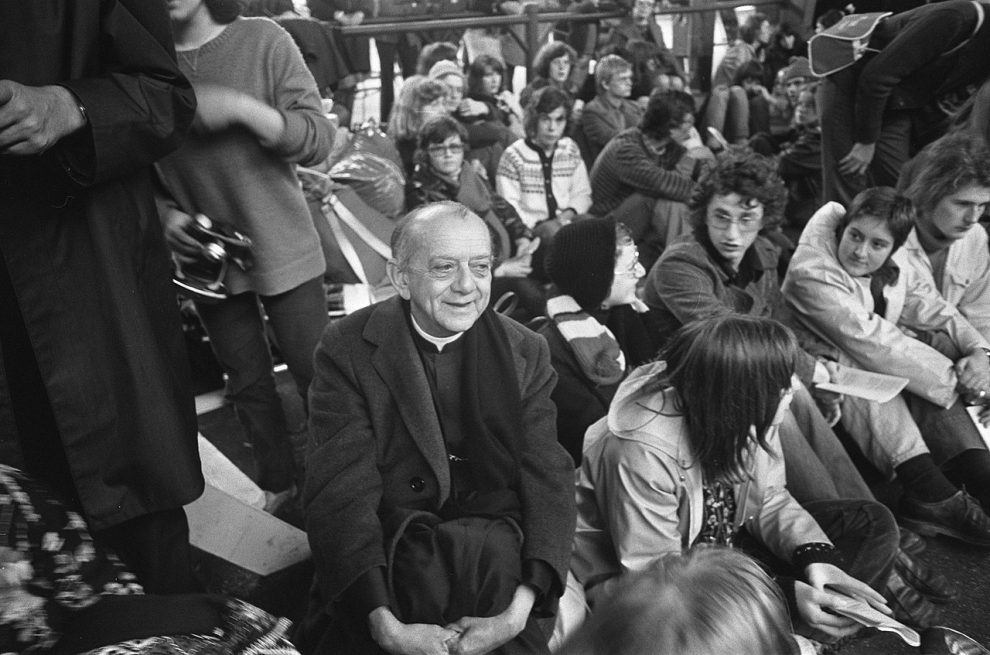 Dom Hélder Câmara offered this statement at a time when injustice, violence, and repression were rampant in Brazil and many other places in Latin America. This archbishop of Olinda and Recife (1964–1985) was an outspoken advocate for poor and oppressed people of Brazil’s northeast region.

Often referred to as the “bishop of the slums,” he embraced liberation theology and encouraged people experiencing poverty to find their voices through group study of scripture and their own proposals for social change. He strongly criticized Brazil’s military dictatorships and called for land reform and other changes. The archbishop was especially critical of the violent and brutal treatment the poor suffered at the hands of the military and of the scandalous economic disparities this force sought to keep in place.

Câmara was a powerful witness to the gospel’s call to justice and peace. Now, 21 years after his death, he remains a living model of Christian spirituality for how we might live knowing that God is always present and calling us to greater love. Câmara’s spirituality was rooted in and responsive to the world in which he lived.

I met Câmara in 1987 when I was organizing a conference at Saint John’s University in Collegeville, Minnesota. With the assistance of Benedictine sisters working in his diocese, I invited Câmara to be our conference’s main speaker. He would address the connection between marginalized people and the need for land reform.

My admiration for this gentle, white-robed archbishop took root before he spoke at the conference. Father William Skudlarek, a Benedictine monk from Saint John’s Abbey who had been living and ministering in Brazil for several years, accompanied Câmara from Brazil to Minnesota. I picked them up at the Minneapolis-St. Paul International Airport, and we headed to Saint John’s.

Once we were on the road, I realized my guests had not eaten for several hours. It was late in the evening, and not many restaurants were open between the Twin Cities and Collegeville. We stopped at a Perkins in Monticello, Minnesota. Câmara made a powerful impression on the people he encountered, greeting everyone and graciously thanking every server and worker he met. He gently showed what it means to respect the dignity of every person we meet at any moment and in any situation.

Câmara’s words and actions at that restaurant reminded me of something else he had done in the mid-1960s. Near the end of the Second Vatican Council, Câmara led 40 bishops to sign the Pact of the Catacombs. This statement challenged all bishops to accept lifestyles reflecting evangelical poverty.

During his presentation at Saint John’s, Câmara recounted with painful regret the fact that his country at one time engaged in the slave trade. He spoke of the difficulties we now face in trying to end poverty and other forms of injustice. He described the challenge of getting those of us blessed with resources to live out Jesus’ call to feed the hungry and give drink to the thirsty. He emphasized the need to change economic, social, and political systems that hold two thirds of the world’s population in poverty, while the affluent minority lives with more than it needs. And he spoke of hope.

Câmara reminded us that Christians are not fatalistic. We are not forever stuck in a bad place. We are people of hope, and people of hope are people who can bring change. Most important, he assured us that when things are at their worst, the Holy Spirit is ever more present to guide us. Câmara shared with us that our spirituality—our response to God’s presence and love—is not a flight from this world but an engagement with the Spirit to build a world that reflects God’s love, mercy, justice, and peace.

The spirituality that moved Câmara seems to be one that led him to see the world as it is, to identify with the marginalized who suffer injustices, and to appreciate why many among them were pushing back. In his book Spiral of Violence (Sheed & Ward Ltd.), he wrote that extreme poverty often leads to violent revolt by those who are oppressed. This in turn leads to equally violent suppression by state authorities—the spiral of violence.

Only love is constructive and strong.

Câmara wrote that violence is not the way to bring needed change, even as he understood why oppressed people—especially those who are young—are inclined to move in that direction. He insisted that true and lasting peace and dignified living for everyone are possible only through acts of justice. In this he cautioned religions not to offer beautiful principles without accompanying actions to help bring about what those principles proclaim.

Câmara guides me in many ways today. My spirituality, my response to God’s love, can never be separated from the realities of daily living. It must always bear an incarnational character—grounded in my life, in my social context, and in the challenges this world presents. We see this in Câmara’s love for the poor, in his speaking out against violence and oppression, and in his spontaneous, poetic prayers. All of this appears to reflect his own response to God’s love.

We also learn from this humble archbishop how to respond to violence in our lives and in the world we inhabit. In this context of violence, war, and oppression, Câmara maintained a commitment to nonviolent responses. Violence is also present in our culture and society today: our easy and nonreflective embrace of military solutions to global tensions, our abuse of refugees seeking freedom from violence in their own countries, our extreme polarization and inability to carry on civil discourse among ourselves.

In Câmara’s response to the injustice and violence of his time, we find guidance to navigate our own difficult national and global tensions. Demeaning other people, shouting instead of dialoguing, failing to see every person we meet as a dignified child of God—all these contradict what it means to be a disciple of Jesus Christ. Câmara’s work on behalf of the poor and marginalized in Brazil—and his gracious exchanges with the restaurant workers in Monticello—shows us another way. That way surfaces in his words encouraging young people not to embrace violence as the means to social change:

If I joyfully spend the rest of my life, of my powers, of my energies in demanding justice, but without hatred, without armed violence, through liberating moral pressure, through truth and love, it is because I am convinced that only love is constructive and strong.

Bernard Evans is professor emeritus from Saint John’s University in Collegeville, Minnesota, where he served as associate dean for faculty in the School of Theology. Evans also taught courses on Christian social ethics, environmental theology, and ministry in rural communities. His most recent publications include Lazarus at the Table: Catholics and Social Justice (Liturgical Press) as well as Vote Catholic? Beyond the Political Din (Liturgical Press).