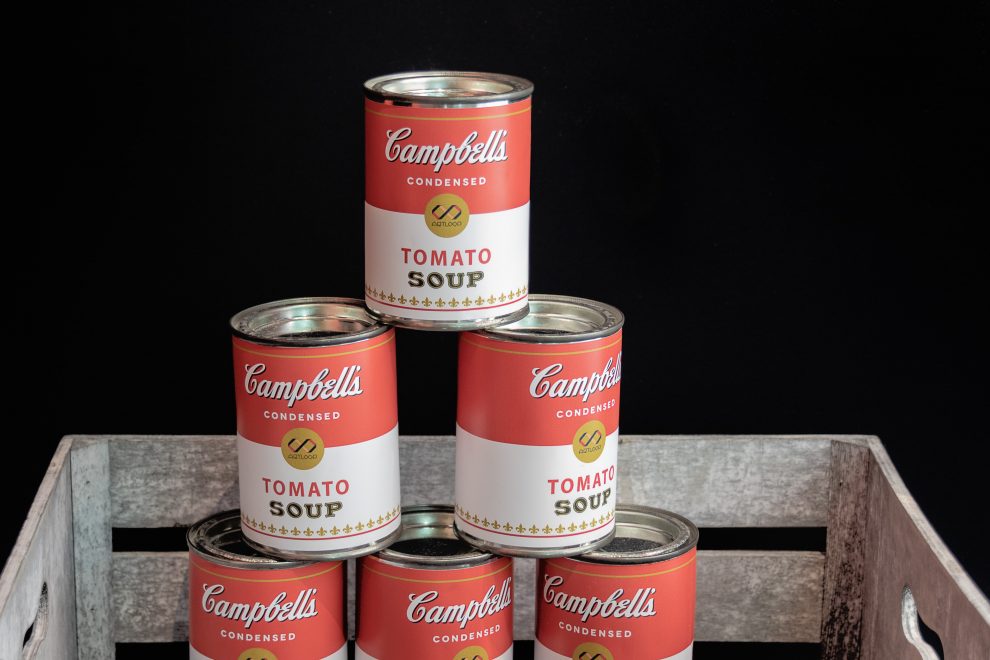 When you walk into the new traveling art exhibit, “Andy Warhol: Revelation,” one of the first things you see is a poster-sized black-and-white photo of the iconostasis, a floor-to-ceiling screen with paintings of dozens of saints, standing behind the altar at Saint John Chrysostom Byzantine Catholic Church in Pittsburgh.

That pretty much explains the relationship between the artist’s religion and his work. From infancy to the age of 21, Andrew Warhola spent untold hours staring at those images. By the time he went to New York and became Andy Warhol, Eastern Catholic art and ritual had sunk so deeply into his bones that nothing could separate him from them.

Thrust a free-roaming creative artist with that background into the pop cultural ferment of midcentury New York, and it would almost be surprising if you didn’t get icon panels of Marilyn Monroe or painstaking renderings of iconic objects such as Campbell’s soup cans. As the exhibit makes clear, Warhol’s premodern starting point helped prepare him to become the postmodern Picasso, abolishing distinctions between “high” and “low” art. After all, in his family’s religious practice, one could experience the very presence of God through cheap, mass-produced objects that many would call kitschy.

But Warhol’s religion wasn’t just a vestigial legacy from childhood. As the exhibit explains, throughout his life he still said his prayers and even occasionally went to church. Staying connected to the church all those years was, of course, complicated by the fact that Warhol was an openly gay man. He didn’t see a way to be fully himself in the church, but he also wasn’t fully himself without it.

Warhol seems to have managed this dilemma by living two separate lives at different ends of Manhattan Island. Throughout the legendary 1960s, in his downtown studio, The Factory, he did his work amid the noise and waste of kinky sex and hard drugs. Warhol doesn’t seem to have indulged in much of this behavior, but he cultivated the scene and voyeuristically captured it on camera. Meanwhile, he filled his uptown home with religious art. Not far away was his Dominican parish church, St. Vincent Ferrer, where he attended Sunday Mass, or at least part of it, and stopped in during the week for a few minutes of quiet.

The exhibit seeks mainly to rebuild the bridge between Warhola, the nice Catholic boy from Pittsburgh, and Warhol, ‘the pope of pop.’

When Warhol died in 1987, during his eulogy art historian John Richardson surprised the artist’s downtown friends with the news that he had remained, throughout his entire life, a believing and even practicing Catholic. He prayed privately and in church. He paid the bills for a nephew who was studying for the priesthood. He practiced works of mercy by serving meals to those experiencing homelessness. Richardson even claimed that Warhol was responsible for at least one unnamed person’s conversion to the faith. In a new biography, Warhol (Ecco), author Blake Gopnik takes issue with Richardson’s depiction, pointing out that the adult Warhol never made a confession and never received communion and so was never really a practicing Catholic.

Of course, both these versions of Warhol’s religious life can be true, and they probably are. For its part, the “Andy Warhol: Revelation” exhibit seeks mainly to rebuild the bridge between Warhola, the nice Catholic boy from Pittsburgh, and Warhol, “the pope of pop.” Since the artist was also a confirmed pack rat, the evidence is plentiful. Long glass-covered tables are stuffed with prayer cards, rosaries, Sunday church bulletins, his ticket to an audience with St. Pope John Paul II—he saved it all. We also see one of the boy artist’s very first finished works, a hand-painted statue of Christ, as well as some of his mother’s eerie ink drawings of angels.

As the exhibit moves into the pop art era, the curators emphasize the parallels between Warhol’s silk screen portraits of celebrities and the icons he saw in church. The kinship is unmistakable. The portraits of Jacqueline Kennedy, made from photographs taken immediately after her husband’s assassination, really could stand in for Our Lady of Sorrows in any church that could afford them.

All of this leads up to the last big project of Warhol’s career, his commissioned renderings of Leonardo da Vinci’s The Last Supper. A pink version, 6 1⁄2 by 25 feet, is a visual high point of the exhibit, but I was even more taken with Warhol’s carefully lit close-up photographs of a set of ceramic Last Supper figurines that he bought at a gas station on the New Jersey Turnpike.

Ultimately, Warhol was a Catholic artist, because his work communicates the incarnational view of the world, the signature of Catholic culture wherever it is found.

That brings us to the implied theology of Warhol’s art. Ultimately, Warhol was a Catholic artist, because his work communicates the incarnational view of the world, the signature of Catholic culture wherever it is found. His renderings of everyday objects into art state that, in a world in which the Word became flesh, beauty and transcendence are not just properties of certified art or religion but also spiritual realities that suffuse the ordinary world.

As critic Arthur Danto points out in his book Andy Warhol (Yale University Press), the only difference between an ordinary Brillo box and a Warhol Brillo box is that we, through the artist’s eyes, see the latter as art, communicating a quality of transcendence. The same could be said of a crucifix around a neck or a set of rosary beads in a pocket. They are ordinary things that can become vehicles of grace. And that was Warhol’s world, from the cradle to the grave.

Travel plans for the Warhol exhibit are uncertain due to the COVID-19 pandemic. It’s currently at the Speed Art Museum in Louisville, Kentucky, and, according to Warhol Museum staff, it will be at a still-unnamed East Coast venue in 2021.

Danny Collum recently participated in a Virtual After Hours at the Speed Art Museum, where he discussed “Andy Warhol: Revelation” and what it can teach us about Warhol’s faith and life. Check it out below: