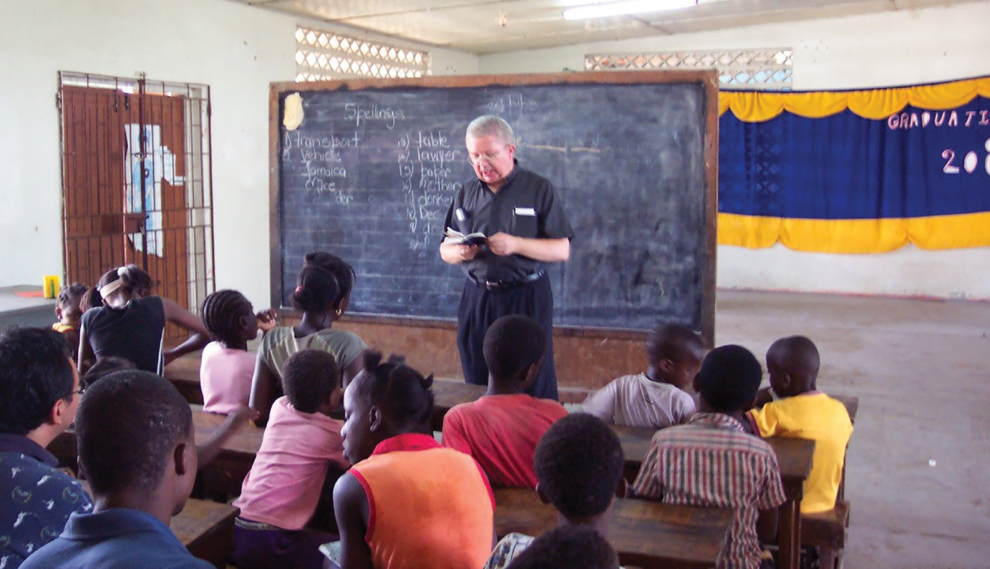 In 2001 I celebrated my first Mass as pastor of St. John the Baptist Catholic Church in Kingston, Jamaica. The church was filled with music, fellowship, and warmth. Afterward, while I was greeting people as they left, one parishioner asked me, “Why did you not give us a homily today?”

Puzzled, I responded, “Sure I did, right after the gospel reading.” She replied, “That wasn’t a homily. It was more like a reflection.”

I learned many other lessons from the Jamaican people during that time. One of my most treasured lessons concerns their burial rites.

Before I came to the Claretians in 1998, I was a priest for 22 years in the Archdiocese of Philadelphia. During that time I presided over many graveside burials, most of which had much the same format. When I completed my part, friends and family laid flowers upon the coffin, the coffin was lowered, people offered comforting words to one another, then left for a shared meal. If there was an outer box, the funeral director stayed behind while the gravediggers lowered and sealed the lid. I remained to witness this closure and offer my own silent prayer.

But in Jamaica it was different. Whereas in the United States we have minimal music during the funeral Mass and an occasional eulogy after the communion rite, Jamaican funerals include lots of music—multiple testimonies that include school choirs and choirs from non-Catholic churches—and often multiple eulogies.

After a funeral Mass in the United States, we would proceed to the cemetery. At the gravesite gathering in Jamaica, there was sometimes a request to open the coffin once more before the burial, and those with cameras would take photos of the deceased with other family and friends or selfies.

After praying the graveside ritual at my first burial as pastor of Our Lady of the Angels Catholic Church in Kingston, Jamaica, gravediggers lowered the coffin, but no one left to go share a meal like they would in the United States. Instead, everyone stood there silently. I turned to the church sacristan, Miss Ives Beacon, and whispered, “No one is moving.” She whispered back, “They’re waiting for you.” “To do what?” “Start the singing.” “The singing?” “Yes, we sing as the gravediggers fill the grave.” “I don’t know what songs they know. You lead them.”

I was introduced to a new tradition: When we arrived at the graveside and after the photos were taken, Miss Beacon led the congregation in a song. Then I initiated the opening prayers of the ritual, which were followed by another song and prayer. After the committal prayer, I instructed the gravediggers to lower the coffin, and we sang another song. I learned to alternate prayers and songs until the grave was filled. When the last spade of dirt was laid on the ground, we all sang a rousing chorus of “No Grave Can Hold My Body Down.”

These funerals beautifully express Jamaican Catholics’ faith. Catholics are a minority in Jamaica, but people are proud of their faith. Most of my parishioners, in one way or another, had been afflicted by gun violence. Yet they remained strong, and our liturgies were joyous, full of music and fellowship.

When I remember my time there, I wish my own funeral to be the same joyous celebration of life. I hope people will stay at my graveside, praying and singing until that final spade of dirt is laid. With gusto, I want all to sing:

This article also appears in the July issue of U.S. Catholic (Vol. 85, No. 7, page 7). Click here to subscribe to the magazine.

TagsDeath and dying The Examined Life

Father Tom McGann, C.M.F., was ordained in 1976 for the Archdiocese of Philadelphia. In 1998 he received permission to join the Claretian Missionaries in Chicago.