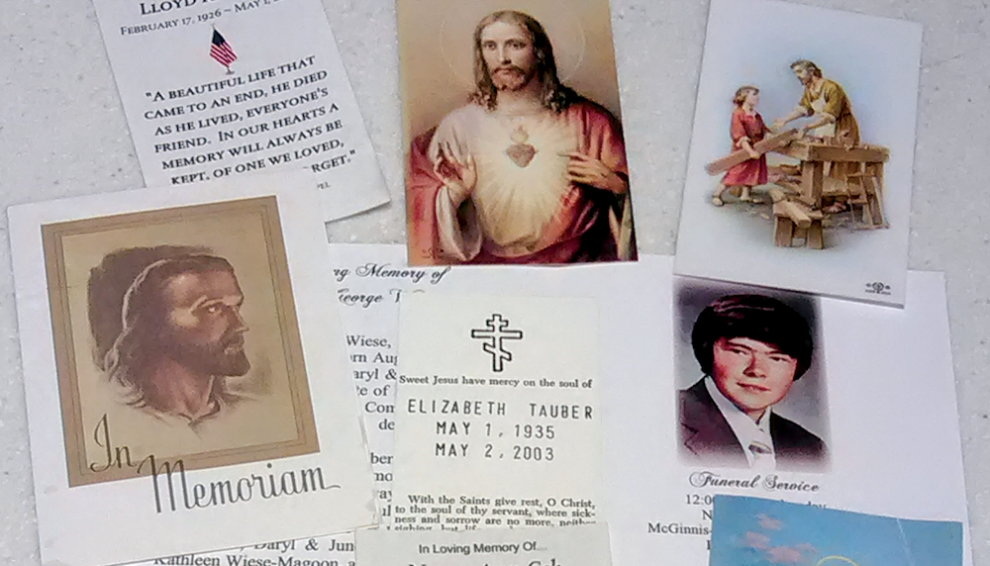 Several years ago, my brother and I found ourselves in the throes of that middle-aged rite of passage—the clearing out of our parents’ house—not long after doing the same at the home of our two maiden aunts.

There’s a commonality to the experience: unearthing moldy newspapers with historic headlines in the basement; combing through kitchen tools in search of a replacement for the one you dropped behind your stove; and bagging up clothes for the umpteenth trip to St. Vincent de Paul.

Sentimentality steals away moments. Overpowering emotion robs you of days.

If you’re Catholic, you inevitably come across prayer cards from deceased friends’ and family members’ funerals. My brother and I found them in prayer books, inside boxes of photographs, and tucked away in drawers. The oldest was from our dad’s infant brother, Billy, who died in September 1926 after just a few weeks of life. The more recent were from my parents’ friends who began passing away as they approached their 80s.

My brother, who is a less frequent churchgoer than I am, handed them all off to me. I confess that my first thought was, “What do I do with them?”

The roughly 2-inch-by-4-inch cards were a fascinating panorama of artwork and prayer styles. The earliest—black-and-sepia-toned—feature images of the suffering Christ and are uniform in prayer. They begin with the words of St. Ambrose: “We have loved him during life, let us not abandon him, until we have conducted him by our prayers into the house of the Lord.” Next, “Jesus! Mary! Joseph!” are invoked. Often a note follows: “Well fortified with the Sacraments of the Holy Church.” And then, “In your charity, pray for the soul of . . .” The prayer itself asks the “gentle Heart of Jesus” to “have mercy on the soul of Thy departed servant” and to “send Thy angels to deliver Thy servant from the shadows of exile to the bright home of heaven.”

The more recent cards are flimsier but in full color, with artwork expanding to Mary, Joseph, and the saints, particularly St. Thérèse of Lisieux and St. Francis of Assisi. The prayer might be the deceased’s favorite: the Memorare or the Prayer of St. Francis. Many from the last decade abandoned prayer in favor of a poem: “Afterglow,” “God’s Garden,” or “Safely Home”—chosen to comfort the mourner while missing the mark to some degree in the church’s theology of death.

More than a historical record or curiosity, I eventually realized, these were prayers meant to be prayed for the deceased not just for a few days after the funeral but as a continuing obligation that the church has required of its members since the beginning.

Commending the Jewish practice of praying for the dead, the Catechism of the Catholic Church cites 2 Maccabees 12:45 as the underpinning for respecting their memory “because it is a holy and a wholesome thought to pray for the dead that they may be loosed from their sins.” The catechism further develops the thought: “From the beginning the Church has honored the memory of the dead and offered prayers in suffrage for them . . . so that, thus purified, they may attain the beatific vision of God.”

The most important reason for funeral prayer cards has been for family and friends to pray that their loved ones are welcomed into heaven.

By our prayers, we speed along their journey to the heavenly kingdom that St. Cyprian imagined as “the glorious band of apostles, . . . the exultant assembly of prophets, . . . the innumerable host of martyrs, crowned for their glorious victory in combat and in death, . . . the virgins who subdued their passions by the strength of continence, . . . the merciful . . . who fulfilled the demands of justice by providing for the poor.”

Our most fervent prayer for our loved ones is that they be part of that magnificent, triumphant congregation.

To organize the dozens of cards, I purchased Marci Alborghetti’s The Saints Day by Day (Catholic Book Publishing), a daily devotional. Four days appear on facing pages, each entry commemorating a saint’s feast day with a biblical quotation, a reflection (usually from that saint), and a short prayer. I placed each funeral prayer card into the page that corresponded to the person’s date of death. For the four days when that card is on the open page, I reacquaint myself with that family member or friend as the memories come flooding back.

Guided by the card, I pray that the deceased is in heaven and, if not, that the Lord will welcome him or her there. Since prayer for the dead does not end until someone is canonized, the prayer is the same for my great-aunt Gertie who died in 1973 as it is for my friend’s mother who died just a few months ago.

In the preface to the eucharistic prayer at a funeral, we hear the familiar: “Lord, for your faithful people life is changed, not ended.” A two-way connection, nourished by prayer, continues between our loved ones and us even after death.

We might be used to asking our close deceased relatives to pray for us, but it is a wondrous revelation that a whole army of prayer warriors awaits our intercessions. In late November, I can ask not only my late grandmother’s friend Loretta Mannes to pray for my children, but my request can also go to President Kennedy, whose prayer card was distributed in Catholic churches throughout the country and carefully saved in many homes.

Catholics believe that praying for others helps us grow in holiness ourselves. While I can’t account for my own increase in holiness, praying with memorial cards has been a reminder of my mortality, an act of charity I can easily perform for loved ones, and an exercise in humility in asking others to pray for me.

If you’re blessed to find a family collection or inspired to gather what’s in your own house, turn those prayer cards into a daily devotion.

Pray for the dead and let them pray for you.

Susan W. Murray is an award-winning writer for the Woodstock Independent in Illinois. A former Catholic schoolteacher and administrator, she and her husband, Deacon Tom Murray, are parents of four and first-time grandparents.