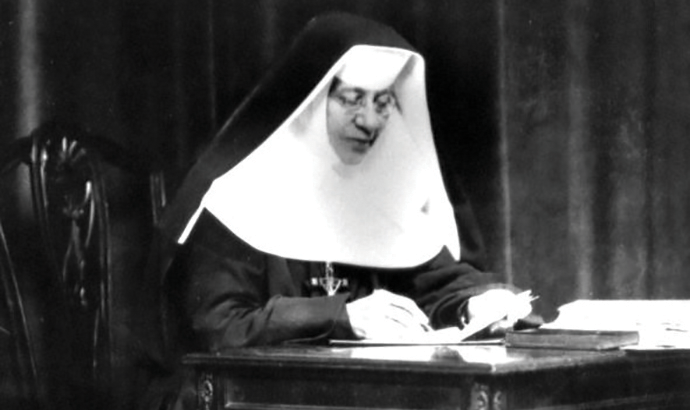 This is one article in a three-part series on pilgrim saints, also including: Pray while you walk with St. Dominic de Guzmanand Find God in creation with St. Cuthbert.

I’ve traveled alongside saints since my upbringing in the barely post-Second Vatican Council era. Back then, devotional Catholicism was still the church’s major self-expression, and liturgy was just a backdrop you could cheerfully ignore while saying your prayers. Back then, statues lined church walls. Holy cards collected on dressers, medals hung around necks, and rosaries lived in pockets. Saints were, as historian Jay Dolan says, every Catholic’s aunts and uncles whose pictures were displayed in our parlors. They journeyed with us in our spiritual DNA.

One face I didn’t recognize back then was Katharine Drexel’s, which may seem odd considering we find affinity with those who share our roots and befriend folks who inhabit our neighborhoods. Kate and I were both Pennsylvanians whose grandfathers came to this country from the Austrian Tyrol. We both found an enduring love for the whole United States in its diverse regions, cultures, and peoples.

Origins and affections—along with a hefty Catholic upbringing—may be all Kate and I have in common, however. She was a banker’s kid, in her time the richest woman in America. I grew up a coal miner’s daughter in much humbler surroundings. Kate not only founded a religious order with a spectacularly necessary mission, but also became one of the first U.S.-born saints. The jury’s most certainly still out on me.

Growing up white and privileged in the century between the Civil War and the civil rights movement, Kate gave her heart to those who had none of her aces up their sleeves. She committed her life and considerable fortune to promoting the welfare of two politically abandoned communities: Native and African Americans.

For her it was simple justice, not manicured charity. Kate didn’t hand out sandwiches. She built schools and trained teachers. She fought racism in the press, in national policies, even in the church. Naturally shy, she became a woman unafraid to bring the weight of her wealth into the ring of power and duke it out. You want to keep her black schools out of your white neighborhood, her Sisters of the Blessed Sacrament out of your Protestant enclave? Fine. She’ll get the property and permissions anyway, one way or another.

Kate also reached across the aisles, funding other religious communities, black leaders, even Protestant teachers who were already doing the work. It wasn’t about her. It was about seeing justice served.

She died three years before I was born. I feel that near-miss keenly. For me, she’s always been the saint our country needs. She demonstrates how a rich person can sail through the needle’s eye and be justified, which is, biblically speaking, an unlikely scenario. In this country, enjoying arguably more of just about everything people value—resources, opportunity, space, freedoms—we need to know how to parlay our advantages into a life of genuine holiness. Kate found a way, meaning there’s hope for all of us.

I admire Kate’s method as much as her madness. I want to be as cool in transactions, as passionate about goals. She proved that being a saint isn’t just about plunking down in front of the tabernacle all day—though Kate did pray incessantly, especially in the final decades when her health gave out and there was still work to do. Holiness, she understood, is about hearing the heartbeat of your generation and responding courageously. It’s about dismissing personal preferences and stepping out of your comfort zone. It’s about harboring Christ’s passion in your body until it sets you, and the world, on fire. I missed meeting Kate in her century. It would be a greater loss if I failed to accompany her in mine.