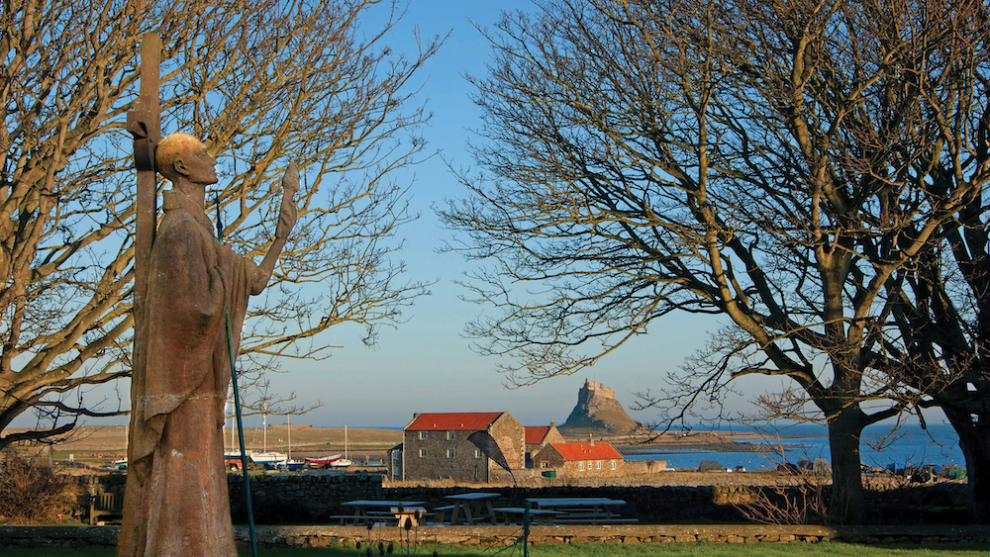 This is one article in a three-part series on pilgrim saints, also including: Pray while you walk with St. Dominic de Guzman and Work for justice with St. Katharine Drexel.

Last year, just before my 60th birthday, I had my first sensation of plodging. I was walking across the two-mile tidal causeway that links the Holy Island of Lindisfarne to the coast of England. It was the last part of a pilgrimage following the path of St. Cuthbert, the patron saint of northern England.

We know little of Cuthbert’s parents or background, but we do know that on an evening in the year 651 Cuthbert, a 16-year-old Anglo-Saxon warrior, saw a light from heaven beaming on the Holy Island of Lindisfarne. He later learned that this phenomenon accompanied the passing of Aidan, the Irishman who brought Christianity to the region. That vision led Cuthbert to join the monastery in Melrose, Scotland, where his reputation for prayer, kindness, and skillful faith-sharing caused his brothers to elect him as prior.

From there, Cuthbert served as abbot at the mother monastery of Lindisfarne. He dwelt on a little side-island, which is still known as “St. Cuthbert’s Island.” Every day, the tide cuts off the little island’s rocky surface from the larger island. This allowed Cuthbert a healthy balance of his energies: contemplation when isolated by the waters and active engagement with the world’s affairs when the tide was low.

Cuthbert deeply connected with nature. His fellow monks knew that he often arose in the darkness and went away by himself, but where to? A brother secretly followed him and saw Cuthbert praying up to his waist in the cold ocean waters. When he returned to the shore, a pair of otters slid out of the water and rolled on his feet, warming him.

In the summer of 2019, my wife and I joined a group of pilgrims from churches in the United States and the United Kingdom. We embarked from Cuthbert’s first monastery in Melrose and followed a 62-mile walk, tracing his footsteps through the borderlands of Scotland and England.

For five days we trudged up and down hills, over stiles, through fields, into the wind. There were scenes of breathtaking beauty, gazing over golden hills from high ridges, quietly passing through lush forests. Yet despite the romance of this trek, I found much of the hike to be an exercise in raw determination. My legs ache, my feet are sore, it’s hot, I have to keep up the pace, I thought this was a good idea . . . why? And then there was the very last stage of the walk from the mainland to the Holy Island. I did not have an otter come and warm my blistered feet, but I did have an epiphany.

The tide cuts off the island from the mainland for half of each day, just as it did in Cuthbert’s time. When it is open, most modern visitors drive across the road, but for centuries the only way to the island was plodging. It’s onomatopoeia for the sound one’s foot makes settling into the muck of the ocean floor, then pulling it out of the mire. Our party walked across in silence, separating out. Soon I was alone in this strange place where the sun glinted off a thin veneer of water over the sea floor.

As I trudged ahead and reflected on the long walk to this point, I had a sudden, bright realization. Cuthbert and his fellow monks trod this way often going back and forth to the mainland. Why did they choose to live in such an inconvenient place? For love! The union with God that they felt on the island was a reward vastly greater than the burden of plodging across the tideway. With that insight my own heart soared. God’s presence was palpable, and I knew that I, an ordinary person, am as much the object of God’s delight as St. Cuthbert is—and this can be the experience of all God’s sons and daughters.