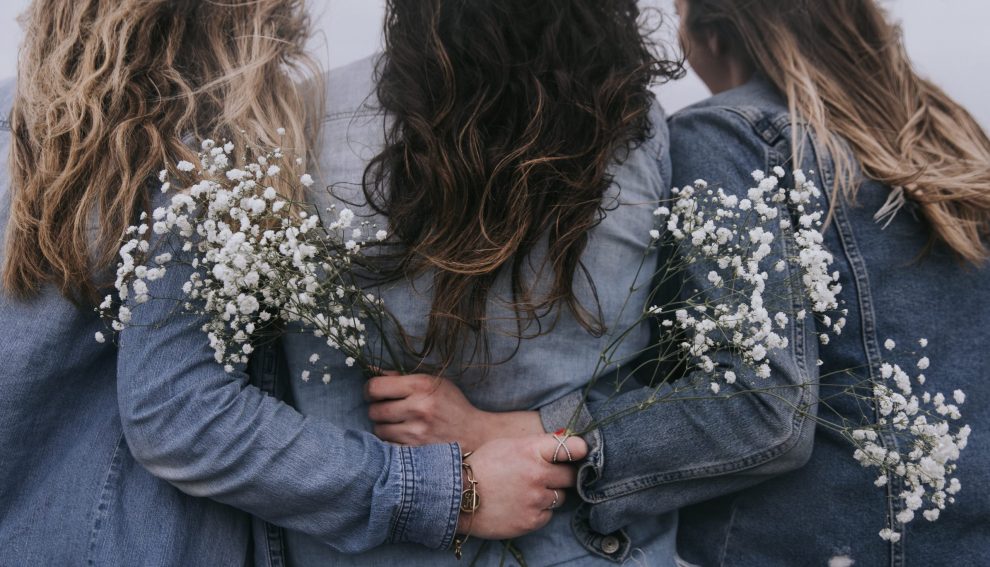 It is called the Church of the Holy Family, and this is most evident at Christmas. The pews are jammed with families—some broken, some evolving, some dearly remembered. At the top of the center aisle, Mary and Joseph are up to their knees in poinsettias with just a small parting of the red sea for the babe between them. His small arms are lifted, his hands open. His parents are bent in adoration.

Four women appear next to the altar: two from the pews, two from scripture.

The first appears at the offering of gifts. A new mother approaches with her baby boy asleep on her right shoulder, a goblet of wine in her left hand. Her hair is tied loosely in back, away from the baby’s face, as she walks to the top of the aisle in the silent church, in the silent night.

She gives the chalice to the celebrant, who touches the sleeping baby ever so gently. The mother smiles, bows to the three figures among the poinsettias, and walks slowly to the side of the altar where she stands, still. Madonna and child.

She is no Madonna wrapped in silence. No child in her arms either. Rather, she holds a precious vial of perfume close, one of the tricks of her trade. She cries her way through filthy streets, past houses of ill repute, all the way to the Pharisee’s house, where she’s heard he is staying.

And he is, sprawled out as is the custom. She cries her way through the honored guests straight to his feet, where she falls, cries all over his feet with I am so sorry, over and over again. I am so sorry.

Then what does she do? She wipes his feet with her luxurious hair. The nerve! The sorrow!

All jaws drop. Some eyes look away, knowing the woman only too well.

And her perfume. This she takes and anoints the man from top to bottom. That’s the end of the perfume. The dirty streets and hovels. The tears.

There she stands, still. A woman covered from head to toe in forgiveness.

Woman at a wedding feast

In the middle of the celebration—the eating, the drinking, the whirligig dancing—the mother finds her son and says, “The wine has run out.”

And what look does his mother give him? Maybe just a smile. Yes, probably a smile. Then she turns to the nearby waiters and says so confidently, oh so confidently as only a mother can, “Do whatever he tells you.”

And water becomes the finest wine anyone ever drank.

As far as we know, this is his first miracle, all because his mother asked.

These are her last recorded words, spoken at a wedding and repeated down the centuries so we might take them personally. “Do whatever he tells you.”

At the Church of the Holy Family, she takes her place beside the other two women, her son behind her.

Next to her stands an abused woman with arms wrappedaround her three children: a 13-year-old girl and 5‑year‑old twins.

Their story is played out in church during the liturgy. At the head of their pew is the husband and father, a tall, burly man with a quick temper and a fast finger pointed at the slightest squirming. And there is squirming from the little boy. With a large, black rosary dangling from one hand, the man takes the other and slaps the boy on his bare legs, a slap heard three pews away.

At the collection, the man hands each member of his family a dollar bill, dons a maroon jacket, and leaves to join three other ushers in the back of the church. His children hurry to the side aisle to put their dollar in his basket.

At communion, still in his usher’s jacket, the man leads his family up the center aisle then returns to the back of the church to distribute the bulletins at the end of Mass.

What he fails to notice is that his family has not returned to the pew after communion. His wife and children have continued up the altar steps and taken their place next to the three women already standing there. The abused mother with her arms wrapped around her children is still now, the girl brave by her mother’s side, the twins hiding in her skirt.

I do not know. I am only a witness who sees the man taking off his usher’s jacket and weeping his way to the top of the center aisle. There he kneels, spreads out his jacket, and implores his family to come down. His wife and daughter are looking elsewhere. Only the little boy, peeking behind his mother’s skirt, sees his father and nudges his mother.

I do not know if they come down and embrace him. I do not know if, when next I go to the Church of the Holy Family, there will be a family united or the same old story.

I do know that at one time or another, each of us stands with the women next to the altar. And that Christ stands behind us all, in us all. And in the man kneeling without his usher’s jacket.

TagsMary Women in the church