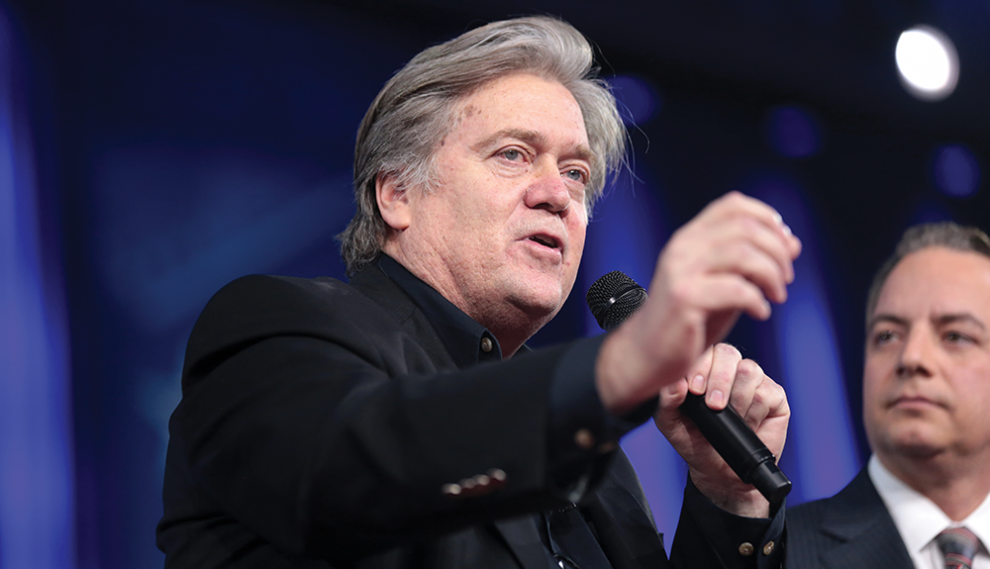 Stephen K. Bannon, former chief strategist for Donald Trump, could be the most dangerous man in America. He understands that America’s non-college-educated workers are right to be mad about 45 years of stagnant or declining wages, and, ever since his days at Breitbart News, Bannon has proved himself a master at using mass media to divert that anger away from the billionaire class and toward immigrants and Muslims. Since leaving the Trump White House in August 2017, Bannon has busied himself supporting kindred ethno-populist politicians in the United States and building a European alliance of anti-immigrant nationalist political parties and anti-Muslim Catholic traditionalists.

Two recent documentaries—Errol Morris’ American Dharma (streaming on Vudu and Amazon) and Alison Klayman’s The Brink (on Hulu and Amazon)—try, in very different ways, to expose the man behind the politics of racial resentment. In American Dharma, Morris interviews Bannon in an otherwise empty cavernous Quonset hut and intersperses the talking heads with footage from the classic films Bannon claims as inspiration (among them Twelve O’Clock High, The Searchers, and The Candidate). Klayman’s film is a fly-on-the-wall documentary that follows Bannon on a 2018 U.S. speaking tour for Republican congressional candidates and an organizing foray across Europe.

American Dharma opens with Bannon conducting an amateur film studies seminar on Twelve O’Clock High. In that film, he says, Gregory Peck’s character must fulfill his “dharma—his duty, fate, destiny”—and inspire his demoralized men to do the same. “Modernity is built on emotionalism,” Bannon says, “on what makes you feel good.” Peck and his men, however, focus on the mission, not on themselves.

So far so good. Who can argue that we don’t need a little more selfless devotion to the common good these days?

No one, except maybe Bannon himself. About an hour into The Brink, we hear Bannon justify a nakedly irrational appeal to the darkest emotions, saying: “Hate is a motivator. Anger is a motivator.”

Of course, you’d expect such contradictions from your average political flack. But the average political flack wouldn’t be the subject of two, high-quality feature-length documentaries in the same year. Instead Bannon portrays himself as a big thinker riding the crest of a nationalist wave that is going to “make the Republicans into a workers’ party” and consign the elite “party of Davos” to history’s dustbin.

Bannon’s track record suggests a knack for turning outlandish propositions into grim reality. In American Dharma, he boasts that when he took over in August 2016 the Trump campaign was “10 or 15 points down.” He took his strategic cues from the June 2016 Brexit vote: “Stop immigration. Bring back manufacturing. Stop the wars.” That campaign pitch still provides the main theme of Bannon’s appeal as The Brink follows him through the 2018 congressional campaign. In a Detroit suburb, Bannon declaims, “It is economic nationalism that binds us together—not our race, or gender, or sexual preference—but our citizenship.”

However, it’s hard to square that inclusive rhetoric with the Trump administration’s draconian immigration enforcement or with the travel ban on several Muslim countries that shuts out the families of many U.S. citizens. All this puts Bannon, himself a thrice-divorced Catholic, on a collision course with his own church’s social teaching, but it has also won him allies in some Catholic traditionalist quarters.

Klayman followed Bannon on trips to Europe where he is trying to build a continent-wide alliance of anti-E.U., anti-immigrant nationalist parties. Klayman briefly takes us inside a dinner meeting Bannon hosts for several representatives of European nationalist parties, one of whom actually says about immigration, “We could find some kind of gimmick, something that would give us a common flag.”

During that European swing, we also see Bannon hustling to enlist traditionalist Catholics in his anti-Islam crusade. In The Brink we see clips of a 2014 speech at a Rome conference, sponsored by the Bannon-allied Dignitatis Humanae Institute, in which he condemned a “new barbarity . . . that will literally eradicate everything that we’ve been bequeathed over the last 2,000, 2,500 years.” He was even enlisted by conservative American Cardinal Raymond Burke, cochair for the institute.

If Bannon and his global alliance of antiglobalists were really concerned with rebuilding economies gutted by globalization, raising stagnant worker incomes, and restoring traditional cultural values, the “revolution” he keeps promising in both of these documentaries might be at hand. But in fact Bannon is, as Klayman puts it, “a millionaire funded by billionaires.”

Since these films were made, Bannon’s political fortunes have dipped a bit. Most of his candidates lost in 2018. The Euro-nationalist alliance has yet to gel, and Bannon has damaged his promising alliance with right-wing Catholicism by meeting with French journalist Frédéric Martel about a possible film based on Martel’s book In the Closet of the Vatican: Power, Homosexuality, Hypocrisy (Bloomsbury Continuum). Cardinal Burke immediately severed all ties with Bannon.

However, based on the evidence these documentaries provide, we can expect that as long as there are grievances to be exploited and a billionaire to back him, Bannon’s voice will be heard in the continuing struggle over America’s future as a nation of immigrants.