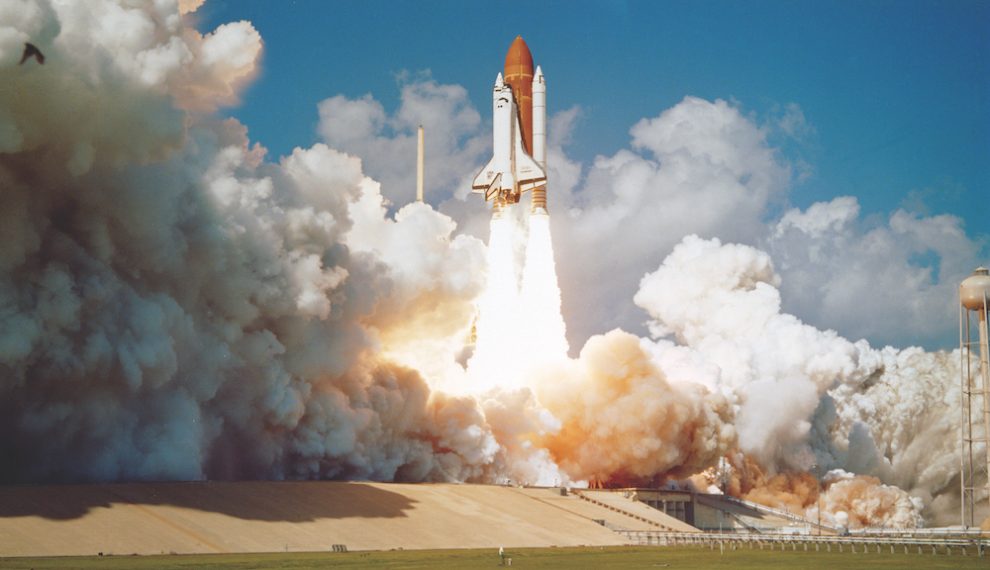 The explosion of the space shuttle Challenger was a defining moment for my generation. We remember where we were when the shuttle exploded on January 28, 1986, killing all seven crew members. Most of us were watching the launch on live television. I was 9 years old and at home, sick with a January cold, convalescing in my older sister’s bed, which she’d never have allowed had she been home. When something had clearly gone wrong, a “major malfunction” as the announcer had said, I called for my mom.

I remember it felt like a personal loss. Christa McAuliffe, the civilian teacher on board, looked like my mom, who was also in her mid-30s, with the same midlength perm and bangs. We lived in Slidell, Louisiana, home to a NASA computer facility and situated between two major NASA production sites in Mississippi and New Orleans. Many of my friends’ parents worked for NASA. McAuliffe really could have been any of our moms.

But even if you didn’t grow up in a town with close ties to the space program, you were, as a child in the mid-’80s, encouraged to be invested in McAuliffe’s space odyssey. She was going to teach us from space! A woman was ushering in the promised era of civilian space travel. The future was upon us. Instead, the Challenger tragedy resulted in widespread NASA layoffs and a chilling of the space program in general. The promised future didn’t arrive—or rather, it didn’t look anything like they promised.

Journalist Ada Calhoun, author of Why We Can’t Sleep: Women’s New Midlife Crisis (Grove Press), was in fifth grade when the Challenger exploded. When she interviewed her former classmates and others who had watched the disaster in real time, she found none of them remembered adults helping them to process what they’d just witnessed—the inevitable deaths of seven people. “Absent parental or administrative guidance, we tried to make sense of the Challenger on our own,” she writes. She reflects on that collective traumatic experience as a harbinger of Gen X’s future struggles and defining cynicism, which she describes elsewhere as “a feeling left over from childhood that the other shoe is about to drop.”

In one of the most anticipated books of 2020, Calhoun echoes conversations getting louder among Gen X women who find that the challenges of middle age—hormonal shifts, financial crises, parenting young children, and caring for aging parents—are bringing them to the edge of despair. It’s not just in our heads. Calhoun points to research that shows Gen Xers not only sleep less than other generations, they also are more anxious than previous generations.

Calhoun is particularly interested in middle-class, college-educated women like herself, raised to believe they could have it all. Yet many of them now wonder why they can’t even have a little and feel guilty that they wanted any in the first place. “We were an experiment in crafting a higher-achieving, more fulfilled, more well-rounded version of the American woman,” she writes. “In midlife many of us find that the experiment is largely a failure.” The Challenger’s shadow looms large throughout the book. We were supposed to go into space, but nearly 35 years later we can’t even afford to go to Florida.

According to Calhoun, while women’s expectations and what’s expected of us definitely changed during Gen X’s lifetime, the world hasn’t keep pace. She cites George Packer’s The Unwinding (Farrar, Straus and Giroux), which points to 1978—the median birth year for Gen X—as a “turning point in America’s character,” when public schools, secure employment, and, especially relevant to an aspiring journalist, “flourishing newspapers” began the “course of a long decline.” She wonders if we are the first generation that won’t age on a U-curve, experiencing midlife depression before bouncing back, but on a downward diagonal.

Professor Joanne B. Ciulla told Calhoun that Gen X women grew up believing the “false illusion that all the problems had been solved” by our Baby Boomer parents and the generations before them. Think of the women you’ve heard claim we don’t “need” feminism anymore or the (white) people who claim that society is “post-racial.” But Calhoun teases out all the ways Gen X women were set up—if not to fail, then to perceive themselves as failures. “The truth is,” Calhoun writes, “that we’ve never really tried what . . . feminists proposed. Yes, women went into the workforce, but without any significant change to gender roles at home, to paid-leave laws, to anything that would make the shift feasible.”

After I finished Calhoun’s book about why we can’t sleep, I read a viral opinion piece in The Week titled “It’s 2020 and women are exhausted.” It notes the bone-deep fatigue of women who are realizing that despite all of our relative privilege, “we are fighting an uphill battle that we very well may not win.” Writer Zoe Fenson wonders, “Can we really push back against a machinery that was built to keep women (and so many others) out of the halls of power? Or will we simply have to swallow our emotions, tamp down our exhaustion, and resign ourselves to America’s misogyny as an immovable object?”

I can almost hear the collective sigh of exhaustion.

TagsCulture in Context Women in the church