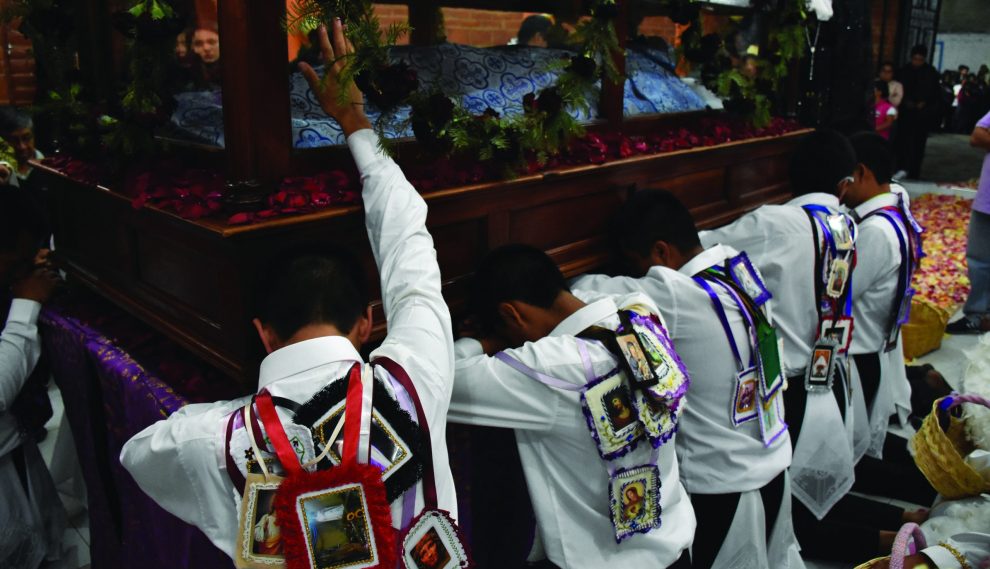 A little before 1 o’clock Saturday morning, the Good Friday procession, which had started at 7 o’clock the night before, finally arrives at the Calvario Chapel in San Gregorio Atlapulco, a pueblo in the southernmost part of Mexico City. It is the procession’s penultimate stop. At that point, Los Varónes—14 young men with deep faith—have carried the heavy coffin containing the figure of a crucified Christ for almost six hours. Pain shows on their faces. Their feet are cut from walking barefoot on broken sidewalks and streets. They’ve been fasting for more than a day. Exhausted, they push on.

“In those moments when I feel that I cannot continue . . . I look in front and see my brothers,” says Ricardo Castro. “They too are suffering, but we depend on each other. I look around and see my pueblo, my family . . . and that motivates me too. Above all, I look at heaven and see God and ask for strength . . . because without him it would not be possible. . . . With him at our side, everything is possible.”

Members of Los Varónes dedicate one or more years to serving the Catholic Church. (Los Varónes is Spanish for “the Young Men,” but in this case the phrase has a deeper connotation of someone being chaste and serious.) Very little has been written about the group, but some oral history exists. “The Franciscans arrived in San Gregorio in the late 16th century, and they were really the first Varónes,” says Arturo Carrasco, an ex-Varón. In fact, St. Francis of Assisi is called El Santo Varón. “Probably in the early 17th century, they started using young men from the pueblo,” Carrasco says. San Gregorio is the only pueblo in all of Mexico, and possibly the world, with such a group.

Although Los Varónes help with many church- and community-related functions, their main work takes place during Holy Week. For that, they prepare months in advance.

They need to be in good physical shape to carry statues for hours. “We will carry a heavy table, run, do push-ups,” says Octavio Flores. “We will put another person on our back and climb stairs.”

Because they go without shoes during the Good Friday procession, they’ll walk barefoot in the hills surrounding San Gregorio. They also prepare spiritually, attending Mass more often and praying more. “There are things we do within us,” says Alberto Casas Garcia, the group’s president. “It is very intimate, and we do not talk about it.” Padre Arturo Román Torres Ruíz, the parish priest, says he doesn’t give them any specific instructions. “They have their traditions. They are prepared,” he says.

It is hard to imagine a worse time for an easily communicable illness like COVID-19 to make a U.S. landfall.

During the Cuaresma, the 40 days between Ash Wednesday and Easter, Los Varónes—who must be unmarried—follow strict rules. “You cannot have contact with your girlfriend,” says Casas Garcia. “You cannot smoke, drink alcohol, dance, or go to fiestas.” Basically, says Flores, “We abstain from things we like.”

Although difficult at times, “it is to serve God,” says Jesús Davíd Mondragón Piña. “It is an expression of my faith.” Prior to Holy Week, Los Varónes shave their heads. “It is not a rule,” says Castro, “but something symbolic to show that we are all equal.”

The night before Palm Sunday, Los Varónes carry a figure called Padre Jesús in a small procession and, like virtually all processions in Mexico, the concussive booms of exploding bottle rockets echo through the pueblo, announcing its arrival. They carry the figure to the home of the sindico, who provides a meal for the group and for the reenactment of the Last Supper.

“My family helps, but it is my responsibility to organize everything,” says Uriel Avelino Avalos, the sindico in 2019. Despite the considerable expense and time commitment, there’s a waiting list of people wanting to hold the position. “I waited eight years,” he says. “I want to do it for the church, for God.”

On Palm Sunday, two Varónes carry the statue of Jesus astride a donkey through the pueblo, followed by the other Varónes, 12 boys dressed as apostles, and the atlapulquences (as residents are known). At the San Juan Moyotepec Chapel, a crowd waits for their palms to be blessed by Padre Arturo. The procession eventually returns to the home of the sindico, where more than 100 guests share a meal.

Daniél Cesareo pulls mightily on the rope he’d wrapped around an orange, securing it to other fruit to form a string that will decorate an altar. “An elder told me that the fruit represent the tears of the Virgin, which become food for the people,” says Javier Márquez Juárez, who has written about ceremonies in San Gregorio. “Altars with fruit are only found in San Gregorio, not other pueblos.”

Carrasco says that only seasonal fruit are used, and some have symbolic significance. “Apples represent sin. Grapes represent wine or the blood of Christ. There is also wheat and bread, and they represent the body of Christ,” he says. Each one of San Gregorio’s 22 neighborhoods has a chapel that’s also decorated.

At 5 o’clock, people gather in the churchyard for a reenactment of the Last Supper. The 12 boys representing the apostles sit at long tables under a large tent and are served a traditional Mexican meal—soup, fish, chile relleno, and rice—while Los Varónes, who have begun their fast and period of silence, stand nearby in front of Padre Jesús. Although the mood under the tent is somber, the atmosphere in the churchyard is festive, as people enjoy bread and atole, a traditional Mexican drink, provided by the sindico.

When the meal is finished, Padre Arturo washes the apostles’ feet and Avelino Avalos places a crown of thorns on each apostle’s head and hands them a coin. The coin, he says, “represents the money that was given to Judas.”

Márquez Juárez thinks there may be another meaning to the coin. “The sindico was a church administrator in colonial times who collected money from the pueblo to pay for the fiestas,” he says. “This was called caja común (common box). The coin represents the caja común.”

As night falls, a silent procession leaves the churchyard. A white cloth covers the eyes of Padre Jesús. “This represents the fact that Jesus is in custody and will soon die,” says Castro. Padre Jesús is carried east while the Virgen Dolorosa (Virgin of Sorrow) heads west. “In this way, Christ represents the sun and Mary the moon,” says Márquez Juárez. “They will meet at the Calvario Chapel and return together to the church.”

When the two figures meet, someone removes Christ’s handkerchief. “This is so Jesus can see his mother,” says Castro. There’s no mention of a meeting between Jesus and Mary on Holy Thursday in the Bible, but “it is more a popular tradition,” Carrasco says.

The day starts before dawn for Los Varónes, who have slept no more than a couple of hours. “Sometimes we sleep at home, sometimes in the church,” says Ángel Nieto. Padre Jesús is fitted with a large cross from the early 17th century and a via crucis wends its way through the pueblo, making 14 stops. Cantantes accompany the cross, singing slow, mournful songs that have an almost hypnotic effect. At each stop, the procession walks on tapetes de aserrín (sawdust rugs), beautiful designs that neighborhood residents spend hours creating out of colored sawdust.

In the churchyard, ex-Varónes stand the figures of the two robbers and the crucified Christ on the ground. The poles holding the crosses are decorated with huejote branches, a sacred tree in San Gregorio. In mid-afternoon Los Varónes, dressed in white shirts signifying purity and black pants signifying sorrow and death, exit the church. They slowly walk barefoot in double file and face the crosses. Flanking them are two young women, who must be single and childless, representing Mary Magdalene and Veronica. Cantantes sing in an otherwise silent churchyard.

Ricardo Enriquez Serralde and Mondragón Piña slowly climb ladders to the top of Christ’s cross. “The steps of the ladder hurt your feet,” says Serralde. “There is the sun. But with devotion, you forget all that. I say a prayer to give us strength to continue. I say to Jesus, ‘I want to serve you.’ ”

It takes almost two hours to release the Christ figure from the cross, which is then carried into the church and placed on a special table. People file past, some touching the figure, some kissing it. Then it’s placed in a glass-enclosed coffin on which red rose petals are spread. At 7 o’clock that night, the final procession begins.

Six, and sometimes eight, Varónes carry the coffin on their shoulders. To mitigate the pain, they’ll change sides and other Varónes will take their place. As the procession passes through the pueblo, they’ll climb steep stairs or inclines. At several of the 14 stops, neighbors provide bread and atole to the crowd. But it’s not until they reach the Calvario Chapel that Los Varónes are finally able to take some sustenance. They each drink a glass or two of orange juice.

The Fuego Nuevo (New Fire) is lit just before midnight on Saturday. The sindico lights a large candle from it and then people light their candles off of his. At a signal, everyone extinguishes their lights and candles and a priest conducts Mass at the dimly lit altar. When it’s over, candles are lit again as the church bell rings, a conch shell sounds, and traditional Aztec drums boom.

On Sunday morning, Los Varónes fill containers with holy water containing the rose petals that adorned Christ’s coffin. They hand out chamomile. Nearby, and in all the chapels, fruit that was used to decorate altars is cut up and distributed. The mood is once again festive and Los Varónes, who have slept no more than 10 hours over three days, look alert and happy.

When asked how they can do what they do during Holy Week, every Varón speaks of their faith. But one wordless gesture by Castro is perhaps the most moving explanation. We were in the Calvario Chapel during the Good Friday procession. After drinking a glass of orange juice, Castro came over to me. He looked drawn. He made eye contact with me and raised his head as if to ask, “What do you think?” All I could say was “incredible.” He smiled and pointed one finger heavenward.

Joseph Sorrentino is a freelance journalist and photographer. Visit his website at sorrentinophotography.com.