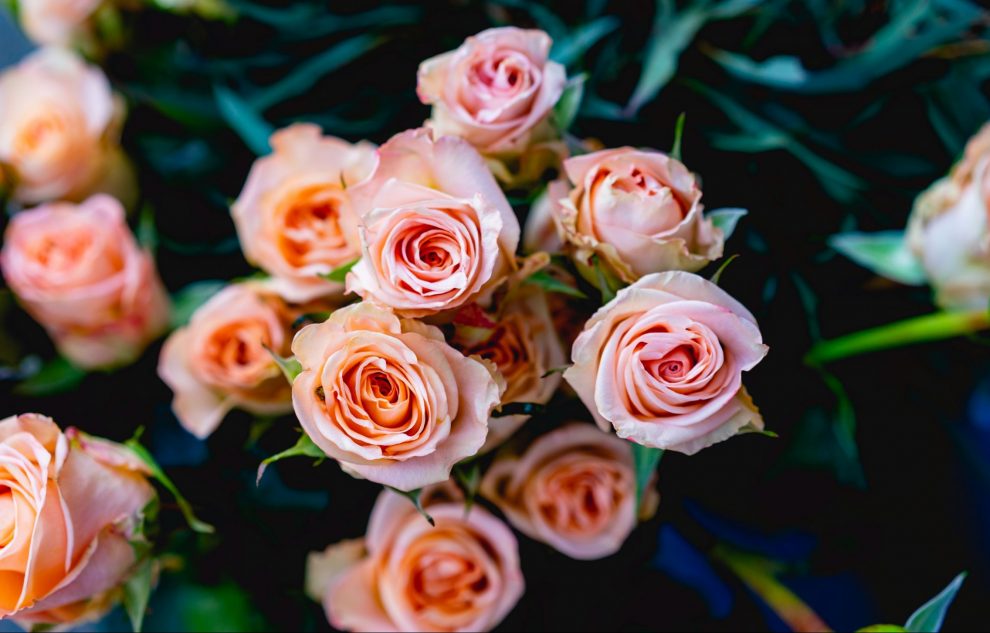 “Give us bread and give us roses.”
—Slogan of female mill workers during what became known as the Bread and Roses Strike, Lawrence, Massachusetts, January 1912

“But when the melancholy fit shall fall . . .Then glut thy sorrow on a morning rose.”
—John Keats

Late in the afternoon we admitted my mother to a nursing facility, I couldn’t stifle wracking tears. I didn’t want Mom, or Dad, to see me cry, so I walked down the hall and plopped in the first empty chair I found, near the nurses’ station. In later months I observed that patients gathered at the desk for silent companionship, as a child might choose to play near a mother in her sewing room.

I sat next to a woman in a wheelchair. In later months I learned her name, Margaret, and noticed that she was rarely rational. But on this June afternoon, she was aware of me and my emotion; she addressed me as if her elder status gave her permission to advise a distressed stranger. “Don’t cry, honey,” she said tenderly. Straight-faced, no ironic smile, she laid out her rationale: “It never does any good.”

Her warning helped me get some perspective on my tears. On one level Margaret was right. Tears do not change material reality; they would not bring my mother back home. But I knew worn-down Margaret was wrong on some visceral plane. Tears can ease us through difficult times. In these two ways, tears and roses are very much alike. Centuries ago Irish poet Thomas Moore said, “The rose distils a healing balm / The beating pulse of pain to calm.”

From the start Mom was more fortunate than most of her fellow residents: She had visitors every day. In the winter a couple routinely sent her a weekly rose, always red with a spray of green. The flowers made her smile, and they surely heartened Dad when he visited her.

The Friday before Mother’s Day, she received a double portion. On Sunday afternoon, Dad noticed that her two roses and their dime-store bud vase were missing from the bedside table. Here yesterday, gone today. “Mother,” as he sometimes called her, “where are your roses?”

Mom’s paralyzed and noncommunicative roommate wasn’t responsible or knowledgeable. Dad went to the nurses’ station. “Do you know what happened to our roses?” Here yesterday, gone today.

Dad and my vigilant sister Norma viewed this disappearance dimly—as a violation of boundaries, say nothing of commandments. Norma sent an email: Mom’s Roses Stolen. Who would, why?

I wasn’t there, so I don’t know all the details, but the next Friday someone on the staff noticed two red, past-their-prime roses in a telltale vase in another resident’s room. Corpus delicti. Mystery solved, sort of. Wanting to avoid a confrontation, Dad didn’t push the who and why questions. Lifted by staff or resident? During the night or while Mom was at lunch or church?

On Saturday morning when I called, he told me the story.

To close the door on the case, I gave my opinion. “Whatever happened, on Mother’s Day somebody needed those roses more than Mom.”

I wondered if it was Margaret.

“To weep is to make less the depth of grief.”
—William Shakespeare, King Henry VI

I discounted Margaret’s “don’t cry” message the weekend we siblings gathered to tear down the household after Dad died, a year to the day after Mom’s death. Anticipating the weekend, I’d predicted what would trigger a burst of extreme emotion. “It will have to do with food,” I’d told my sister Alice. Mourning would break when I realized the life-cache was being packed up, shipped out, no longer available here in central supply. “Maybe emptying a freezer of venison and vegetables.”

I didn’t stop to analyze the dynamics (was I taking on a job no one else really wanted, or was I not-too-subtly claiming territory?), but that weekend I was the menu planner and chief cook, a back-home role I’d gladly assumed in the past decade, even before Mom’s stroke, as she lost her ability to initiate and carry out plans. If several of us sisters were home on a fall Saturday to rake the yard, Dad invariably sent me into the house to make lunch or dinner. Because I have the least upper-body strength, but also because I had the best hand for pinching the most out of the herb tins in Mom’s pantry.

At the end of that great cleaning-up weekend in August, we hadn’t made a sweep through the freezers on the back porch. I hadn’t had a good cry.

Because I had envisioned a frozen emotional trigger, I was caught a bit off guard when Alice sat down on the kitchen floor the last morning and sorted out the contents of a small cupboard stacked with store-bought staples: tuna fish, Jell-O, mushroom soup, cornstarch. One for me, one for you, one for him, one for her. She held up a small, tall jar, meant for olives but now nearly full of brown and beige nubs and marked with ink-on-masking-tape: pickling spices. “What do we do with this?” she asked me. “None of us makes pickles.” She pushed it aside, clearly intending to discard it.

“Mrs. Evans does,” I proffered. This was a churchwoman who’d brought us a funeral casserole and who’d come back to retrieve her stainless Dutch oven before we’d even washed it because she needed it for pickling. “We could take it to her.” Suddenly I laughed, sensing some absurdity in the ecological trade-off: “wasting” gasoline to drive to the Evans’ to spare a cup of seeds and bark from landing in the dumpster. And then the laughing turned into crying.

I quickly left the kitchen and then the house to sit, hugging my knees, on the front-porch glider bench, not yet disassembled, as waves of emotion stronger than any at the time of Dad’s death washed through.

After a while I calmed down enough to focus my sore eyes on the sight directly in front of me: Dad’s front-lawn rose bushes, beetle-chewed but presenting one red and one yellow bud. Roses—William Wilberforce called them the “smiles of God’s goodness.”

When I ventured back into the kitchen, Alice was washing dishes. In the wake of my distress—yes, indeed, triggered by food—she’d closed the cupboard door and set the jar of pickling spices on the counter.