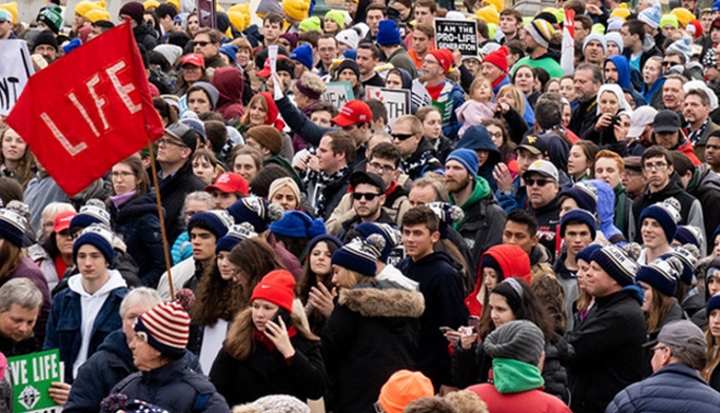 As most Catholics know, January 24 was the 47th March for Life in Washington, D.C. This year, as I have in previous ones, I decided not to attend—not because I support abortion, but because abortion is only one of the many pro-life issues that deserve prominent attention.

President Trump spoke at the rally, saying, “All of us here today understand an eternal truth: Every child is a precious and sacred gift from God. Together we must protect, cherish, and defend the dignity and the sanctity of every human life.” The president received much applause and praise from Christian conservatives. Some parents saw his appearance at the march as an example for their children of faithful citizenship.

Such reactions, however, fail to consider the president’s slandering of those who disagree with him, his dehumanization of those who don’t speak English, and his amorality with respect to women. Such behavior shows not a commitment to life, but a disregard for it.

During the 2016 campaign, candidate Trump touted gutting our health care system that provides for millions, barricading immigrants who are fleeing violence, awarding tax breaks to corporations (at taxpayers’ expense), and eliminating environmental protections. And yet many evangelicals and Catholics still voted for him, arguing that overturning Roe v. Wade was the only priority in the election. Such a mindset ignores the tenets that the Catholic Church demands we uphold: social justice, care for the poor, opposing racism, and other issues involving human life and dignity. This March for Life, one of the pro-life issues that most stuck out for me was care of creation—the natural environment on which all life depends.

Being pro-life necessarily means being pro-environment (meaning, pro-creation). The United States Conference of Catholic Bishops (USCCB) states in its guide “Forming Consciences for Faithful Citizenship,” “We are part of a global community charged with being good stewards of the earth’s environment, what Pope Francis calls ‘our common home,’ which is being threatened. These challenges are at the heart of public life and at the center of the pursuit of the common good. They are intertwined and inseparable.”

This is why marching against abortion while hearing from the president and others who actively oppose environmental protection seems incongruous to me. After all, the bishops clearly state that we must consider the full range of moral issues, particularly those involving human life: “[A] voter should not use a candidate’s opposition to an intrinsic evil to justify indifference or inattentiveness to other important moral issues involving human life and dignity.”

Although the issue of abortion is important, it should not overshadow other life issues, such as the danger that climate change poses to all life. As Pope Francis states in his ecological encyclical Laudato Si’ (On Care for Our Common Home), “The climate is a common good, belonging to all and meant for all . . . linked to many of the essential conditions for human life.” Decades of study and advocacy have persuaded me that environmental degradation and climate change are the biggest dangers to our Earth and to humanity since the atomic bomb, and it is with confidence that I prioritize the environment as an issue of grave importance when evaluating candidates.

St. Thomas Aquinas’ ethical principle of double effect states that it is sometimes permissible to cause harm as a secondary effect of bringing about good. This applies to voting: We who choose candidates who are pro-environment but also pro-choice do not expressly support abortion. Rather, our intention is to save lives by saving creation. Climate change and other environmental problems are already causing literally millions of deaths worldwide—include those of the unborn. As the bishops point out, “Care for Creation is a moral issue. Protecting the land, water, and air we share is a religious duty of stewardship and reflects our responsibility to born and unborn children, who are most vulnerable to environmental assault.”

Until the late 20th century, both Republicans and Democrats appreciated and espoused environmental stewardship. Sadly, in today’s partisan politics, it is difficult if not impossible to find candidates who consistently profess being pro-life in every respect, including being pro-environment. While Trump professed concern for children at the March for Life, his own policies separate children from parents at the U.S.-Mexico border, and his decision to pull the United States out of the Paris Climate Accord, while not as widely recognized as unethical and harmful to children, abrogates our nation’s responsibility to help solve the climate crisis before our children’s very future is threatened. Unfortunately, this mutually exclusive approach to pro-life issues is not unique to our president. Many Catholics seem to believe that being pro-environment implies that one is not pro-life.

Because of this, I often find myself an outlier when it comes to advocating for environmental justice. As leader of my parish’s “Care for Creation” ministry, I have found that many parishioners are either uninformed about environmental justice within Catholic teaching or consider it a low priority compared to other justice issues such as abortion. This is despite the fact that the pope and other religious leaders have stated that the environment must be protected for life itself and that destroying creation is tantamount to sin.

In reality, both Humanae Vitae (Of Human Life) and Laudato Si’ contain crucial teaching about our relationship to God’s creation and the dignity of the human person. One particular passage in Laudato Si’ could apply to both the scourge of abortion and that of the Earth: “When human beings place themselves at the center, they give absolute priority to immediate convenience and all else becomes relative. Hence . . . the rise of a relativism which sees everything as irrelevant unless it serves one’s own immediate interests. There is a logic in all this whereby different attitudes can feed on one another, leading to environmental degradation and social decay.” As a response to teachings such as this, the USCCB is reportedly updating its voters’ guide to incorporate Pope Francis’ teachings on immigration, weapons, health care—and climate change.

In the end, what is really needed to save both the unborn and the planet is a spiritual conversion of hearts. Some legal scholars say it is unlikely that overturning Roe v. Wade will actually prevent abortions, since women who want one will find a way to get one, probably resulting in greater risks to the mother herself. Likewise, climate scientists conclude that unless we drastically reduce fossil-fuel emissions, the Earth will become a very different place and potentially uninhabitable. In other words, enforcing morality through legislation is insufficient to address the underlying need to respect life in all its forms.

As Pope Francis states in Laudato Si’, “[Some] committed and prayerful Christians . . . ridicule expressions of concern for the environment. Others are passive; they choose not to change their habits and thus become inconsistent. So what they all need is an ‘ecological conversion,’ whereby the effects of their encounter with Jesus Christ become evident in their relationship with the world around them.” How can we, as Christ’s earthly body, fully respond to this call to be defenders of both life and creation itself?

First, we must not limit our pro-life commitment to only the issue of abortion. We can start by learning more about what the church tells us regarding the sanctity of all life and creation. Second, we cannot make abortion the only litmus test for choosing a candidate. We can also urge our leaders to support all issues involving human life and dignity, including the environment and, by extension, the poor and vulnerable, who are the most affected by pollution and climate change. If Christians really want our leaders to help protect life in all its stages, then we must also demand that they help protect the environment upon which all life depends. We can’t have the former without the latter.

The environment, particularly climate change, is not an “us-versus-them” issue. It knows no party, has no borders, and is not a matter of opinion to be debated. It is real and affects all life, human or otherwise. It is intergenerational, impacting not only those living today but those who will be born for decades to come.

As Pope Francis admonishes in Laudato Si’, “We must regain the conviction that we need one another, that we have a shared responsibility for others and the world, and that being good and decent are worth it. We have had enough of immorality and the mockery of ethics, goodness, faith and honesty.” As people of faith who value life itself, we must proudly march every day on behalf of all creation.