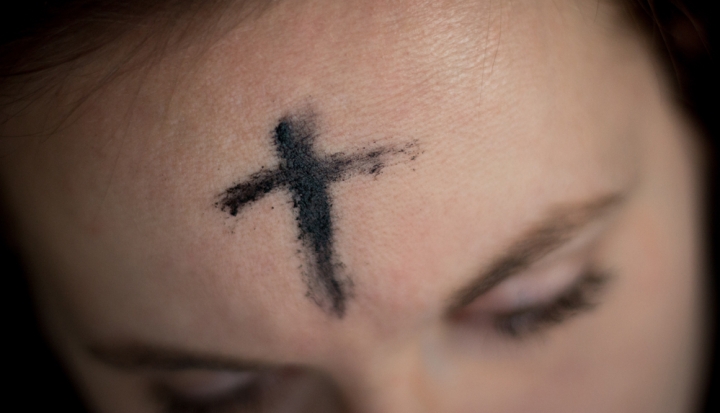 In the Ash Wednesday gospel reading Jesus directs us to clean up: “Put oil on your head and wash your face, so that your fasting may not be seen by others” (Matt. 6:17–18a). And yet shortly after hearing these words we line up to receive ashes on our foreheads, a mark associated with penance and fasting. Clearly the Ash Wednesday ritual does not come from the gospel.

Lent did not always begin on Ash Wednesday. In the sixth century, Gregory the Great identified the season of Lent (Quadragesima, or the “Forty Days”) as beginning on a Sunday and lasting until Easter Sunday.

The Bible recounts 40 days of rain during the flood, Israel’s 40-year journey through the desert, Jesus’ 40-day fast in the desert, and the 40-day period of post-resurrection formation Jesus gave to his disciples before his ascension. At the end of each of these scriptural 40s, the things involved are changed: A sinful world is reconstituted, slaves become free, a carpenter begins a messianic ministry, and fearful followers are ready to become Spirit-filled preachers. Lent and its 40-day fast offered the church the same opportunity for transformation.

Since fasting was not permitted on Sundays, the original 40-day season consisted of 36 fasting days. Eventually, it was extended to include 40 pre-paschal days of fasting, resulting in the addition of four pre-Quadragesimal fasting days, starting the Wednesday before Lent.

Eventually, that fast extended to include a total of nine weeks (Septuagesima). However, the 40th fasting day—a Wednesday—retained significance, in large part because of the scriptural significance of that number.

Ashes were added to this Wednesday liturgy in the eighth and ninth centuries to help ritualize the transformation that occurs during Lent. Believers received ashes on their foreheads to remind them of their fundamental identity: “Remember, you are dust, and to dust you shall return.” After being clothed in a hair shirt, they were sent out from the church: “You are cast forth from the bosom of the holy mother church on account of your sin, as Adam was expelled from Paradise on account of his sin.” Expulsion, however, is not the end. Then, as now, reconciliation awaits believers through Christ.

In its origins, Ash Wednesday was fundamentally oriented toward penance, which was also the focus of Lent at that time. Lent is understood differently today: Its primary focus is now, as at its origins, baptism. Since baptisms in Rome occurred primarily at Easter, the Lenten fast is a pre-baptismal fast—a means by which those converting might better understand how reliant they are upon God and how frequently the pursuits of this world distract from God’s love.

Ash Wednesday can help set us upon that path by asking us to consider two fundamental issues: who we really are and where, with God’s help, we are ultimately going.

Conversion is a lifelong process, says this professor

How Benedict’s Rule can guide your spiritual practice