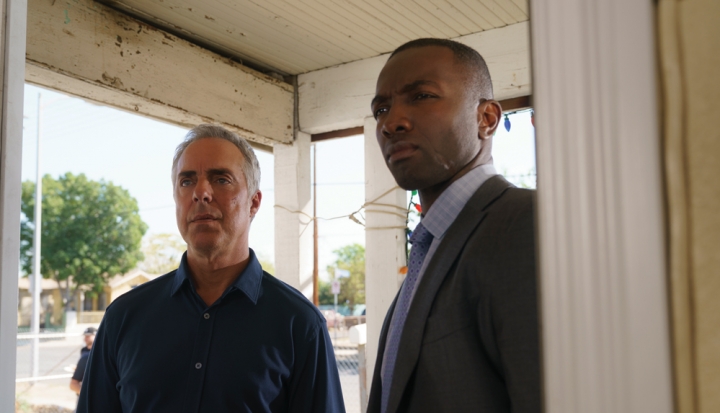 Back in the 1950s, when Sergeant Friday started fighting Los Angeles crime on NBC’s Dragnet, it wasn’t only the television screen that was black and white. The cops were good, the crooks were bad, and every suspect was caught and punished within 30 minutes.

Sergeants Friday and Gannon had nearly omnipotent abilities of detection. Within moments of a robbery, they suddenly possessed a list of the suspect’s known associates. An hour after a car theft, they knocked on only one door, the right one, and the thief helpfully let them in. Justice—at least in media—was tidier back then.

Today, the descendants of that early police procedural show—CSI, NCIS, Criminal Minds, and the like—handle bad guys in enormous crime-fighting teams of computer experts, profilers, psychologists, and sharpshooters, plus quirky

but lovable characters who dress goth or wear bow ties. They operate out of swanky offices that look like high-rises in Dubai, employ technology that rivals NASA’s, and crisscross the country in private jets and blacked-out helicopters. One wonders at the tax base of the municipalities that can support such opulent law enforcement.

Then along comes Bosch on Amazon Prime Video. Based on the 22 Harry Bosch novels by bestselling mystery and crime author Michael Connelly, the fan-favorite five-season series was just renewed for its sixth. Writer and producer Eric Overmyer developed the series and is one of its executive producers. Overmyer makes smart television: Treme, The Wire, St. Elsewhere, The Man in the High Castle.

Bosch is smart too—just one of the ways this series departs from the tech-heavy, edgy-furniture turn of police procedurals in recent years and from the smug dichotomy between good and bad present in the genre’s origins in Dragnet. LAPD detective Hieronymus “Harry” Bosch, named for the 15th-century Dutch painter of gruesome depictions of the horrors of hell, is haunted by his mother’s murder, his years as an orphan, and his Army service in the Gulf War and Afghanistan. Bosch has an ironclad sense of right and wrong that Sergeant Friday would recognize, but nothing is black and white in Bosch’s world. Sometimes cops are bad. Sometimes criminals make sense. Sometimes—OK, most times for Bosch—authority is something to work around, rather than under or with. His world is shades of gray, and he navigates them bumpily.

On Bosch, police work is plodding, understaffed, and painstaking. In other words, it’s realistic. It honors law enforcement and elevates digital research and dead-end phone calls to the work that heroes do. What’s impressive is the tedious, hard work of detecting: knocking on doors, shuffling through papers, scrolling down screens, clicking, clicking. No glamorous offices here—cubicle-dwelling detectives fight over staplers and the only comfortable desk chair.

A brooding police detective with a harrowing past is a trope we’ve seen before, of course, but Bosch does this better than most. Classic Greek heroes were ever built of light and dark, their human flaws more instructive than their godlike qualities. Bosch follows that model. His pain and blind spots are clearly visible, rendering his fierce version of justice less corny and more admirable.

Casting and characterizations are inclusive and appreciated: The police captain is a lesbian, the mayor is Latino, the police chief is African American. Bosch’s ex is a professional poker player, and the extras, criminals, and victims are, you know, regular people of all shapes and colors. Someday soon we will not have to take note of such things.

Bosch is a single father and neither clueless nor burdened by having a teenage daughter about the house. How refreshing to present a man as a competent father without a lot of wonder and amazement expressed by other characters.

Acting is refined, seasoned, and grown up. Not fireworks and tricks, just ability and skill with more subtlety than this genre typically displays.

Bosch is a taciturn fellow, not given to lengthy speeches or even brief ones. Titus Welliver plays him with eloquence and layered restraint. He raises his chin a quarter inch and the point is made. Somehow he telegraphs being dangerous and compassionate while simultaneously being the smartest guy in the room. He also has excellent tattoos.

The elegant Chief Irvin Irving (played by Lance Reddick) is mesmerizing. In season five he and his wife take on a Macbeth plotline that is thorny and adult. Better than stupid car chases any day. Amy Aquino has been in everything and should be in even more, because she plays smart, capable, and authoritative characters without letting go of her vulnerability and humanity. Casting is layered throughout, right down to police partners Crate and Barrel (Gregory Scott Cummins and Troy Evans), who are tender, funny, and rather wondrous.

A surprisingly nuanced character is Los Angeles itself. The grit and grime of cityscapes are not celebrated, as in many crime shows reaching for realism. Instead, L.A. looks soulful and, occasionally, historical. Stylish shots linger on scenes of real beauty and mood. Unexpected treasures like the funicular railway, Angels Flight, appear.

Without the goofiness of many current police procedural shows, Bosch delivers a sense of what it’s like to do a nearly impossible job and what it’s like to work alongside people who, for the most part, are trying to right wrongs every day as best they can.

In a time when we wrestle with how to literally police society while protecting civil freedoms, a realistic view of the human beings in law enforcement and the excellence at least some of them strive for is useful public education. Sergeant Friday would approve.