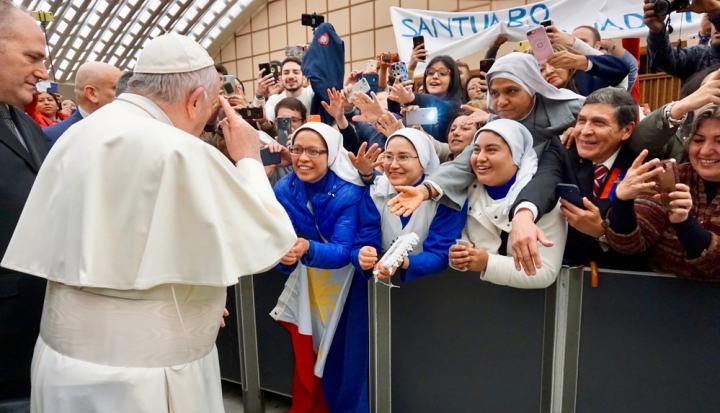 In the fall of 2015, I attended a writing workshop led by the late Brian Doyle. He gave us lots of writing prompts as homework and also gave us his email address because, as he put it, “we’d given him our time so he would give us some of his.” I adore Brian’s rambling, run-on prose poems (which he called “proems”) and decided my homework would be trying to write my own “proem.” After a few weeks, I’d put something together that I thought was fairly decent and emailed it to Brian Doyle.

I waited a grand total of 11 minutes before receiving an answer. He generously said some complimentary words about what I’d written and then suggested I submit my “proem” to U.S. Catholic magazine and gave me the name and email address of one of the editors.

I was delighted but also puzzled. Would anyone care that I wasn’t Catholic? Maybe, I thought, since Catholic Brian Doyle publishes in Protestant magazines, Protestant me can publish in a Catholic magazine.

My poem ran in U.S. Catholic in May 2016, nestled alongside a wonderful essay by Brian Doyle. Since then, I’ve had a handful of other poems and poetry reviews published here. Now, even though no one has ever asked, I feel it is time to declare my religious allegiance.

Yes, I am a Protestant. But I have a huge case of Catholic envy and think a lot about converting. Let me tell you why.

I dislike the word “Protestant.” It is a declaration that you are defining yourself in opposition or protest to something else. Yes, Martin Luther and the other Reformers had valid points. No one disputes that. However, the problems that drove Luther to nail his 95 theses to the church door in Wittenberg were addressed and resolved centuries ago. The “protest” in Protestant is long, long over.

Or is it? Protestants these days don’t protest against the Catholic Church. They fight each other. Once you open the door to division and schism in the quest for religious purity, you never stop. Protestant churches keep dividing themselves.

A few years ago I saw a chart listing the various divisions and subdivisions of the Calvinist churches in the Netherlands. There were so many splits it looked like the NCAA basketball tournament bracket. The inclination is to define yourself by what you aren’t, instead of what you are.

I had a professor in seminary who decried “tennis neck theology,” where you swivel your head to the left and say, “We’re not them,” and then swivel to the right and say, “We’re not them,” over and over again, like someone watching a tennis match. The focus is on the edges of faith, not the center. There have been splits over baptism and women’s roles and even things like joining the Masons. In the last few years, there have been major splits in almost every Protestant denomination over human sexuality. During the recent kerfuffle in his denomination, one Methodist friend quipped to me that “United Methodist Church” was as big an oxymoron as “jumbo shrimp.”

Schism and divisiveness are not just problems, they are heresies. The body of Christ suffers grievously every time one of these splits happens and I have no energy or enthusiasm for the fight. The desire for homogeneity is distorting—a church where everyone thinks the same isn’t the body of Christ.

“If all were a single member,” Paul writes in I Corinthians 12:19, “where would the body be?” I envy the Catholic Church’s ability to remain a really, really big tent, where there is plenty of room to disagree without dividing.

I think of the last three popes, John Paul II, Benedict XVI, and Francis. These men did not come out of the same cookie cutter. They are different people, with different views, and each has made his own significant imprint on the church. There is no sense that factions or wings of the church need to separate from each other because they don’t see things the same way. I think of a priest I know who leads an ultra-conservative group and another that is so far to the left he sees Bernie Sanders in his rearview mirror. Yet neither of these priests says, “I can’t be in the church if he’s in it.” I envy that.

There are strong theological arguments on each side and no doubt the correct path elevates both word and sacrament. But in actual practice, the tendency in Protestant churches, organized around the word, is to make religion a matter of the head, where reason and logic are primary. Catholic churches, organized around the table, lean into divine mystery and matters of the heart.

I’ve reached the point in life where I want to follow my heart more than my head. Orientating around the sacrament leads toward a sacramental view of reality. If we think of a sacrament as a visible representation of an invisible reality, we quickly see that all of life bears the imprint of God and is therefore sacramental.

I love this quote from John Cardinal Newman: “With Christians, a poetical view of things is a duty. We are bid to color all things with hues of faith, to see a divine meaning in every event.” Our lives should not be compartmentalized into the sacred and secular. All of life is sacred. As Father Gerard Manley Hopkins said, “The world is charged with the grandeur of God.” All of it.

I also envy the worldwide reach and diversity of the Catholic Church. I belong to the Reformed Church in America. Our name limits our reach, although we do include some churches in Canada. In contrast, the etymology of the word “catholic” points to being universal. Mother church is a worldwide enterprise, headquartered in Rome, with significant populations on every continent (there are eight churches in Antarctica; four of them are Catholic). It is extraordinarily significant that less than 10% of the College of Cardinals is from the United States.

This universal scope plays out locally. Martin Luther King, Jr. famously said, “It is appalling that the most segregated hour of Christian America is eleven o’clock on Sunday morning.” In my little town of Holland, Michigan, the most racially diverse church is St. Francis de Sales. In large part this is because of immigrants, who have brought their Catholic faith with them. My Reformed church, next door to St. Francis, works hard at being racially inclusive, but there is no comparison between the numbers of people of color finding a home in my church versus those at St. Francis.

I can hear a lot of “yes, buts . . . ” from my Protestant friends. There are still significant things that divide us. But on a personal level, I’ve made peace with them (and I haven’t even mentioned my Catholic step-mother or daughter who works at a Jesuit university). I’m grateful that you’ve made space for me, a Protestant who leans very much in your direction. Maybe someday I’ll come all the way in.

Jeffrey Munroe is the executive vice president of Western Theological Seminary and author of the book Reading Buechner (InterVarsity Press).