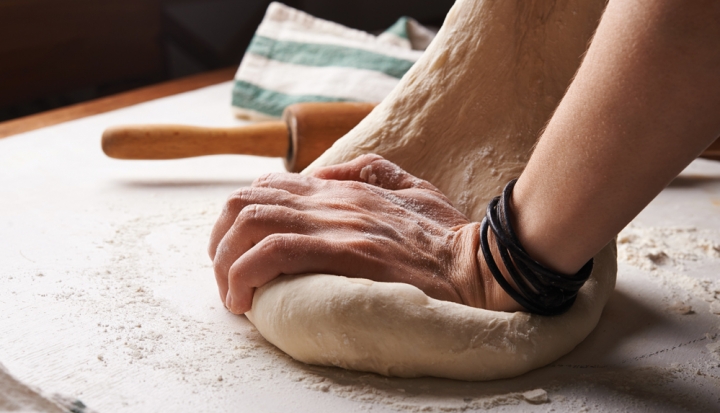 I have a new living organism—for lack of a better term—to feed in my house. It is my sourdough starter, a beige and pasty mix of wheat flour, water, and yeast that lives in a glass jar in the back of the refrigerator. Once a week it visits the kitchen counter, where it is replenished with water, flour, and oxygen. I sometimes divide it and use half for sourdough crackers or flatbread.

I regularly ask friends if they’d like some starter, because the maintenance of it is so consuming. Each week, you must discard at least half of the portion lest your sourdough grow so exponentially that it takes over every shelf in your refrigerator and piece of storageware in your cupboard.

Some “bread heads” boast of starters with lineages tracing back to the “Old World,” starters that have been nurtured for more than 100 years. My starter was given to me by Peter Reinhart, James Beard Award-winning author of The Bread Baker’s Apprentice (Ten Speed Press), after a class I took with him.

I prepare sourdough loaves each week following a combination of instructions from other bakers and my own intuition. Each loaf is different, a product of ingredients, time, temperature, and my own hands—and my son’s. Baking bread is an ancient art that I’ve adapted with guidance and wisdom from the finest bakers by listening to my own instincts and by attending to the needs of my family.

My apartment kitchen has been transformed into a nanobakery largely as research for a book I’m writing on the spirituality of bread and the Eucharist. Little did I realize that even before the oven is preheated, my baking gives my family much to reflect upon. It started a year ago, when we traveled to western Michigan to plant heirloom wheat on a small, organic farm that would be harvested the following year and then milled into flour intended for communion bread and wafers.

On a crisp October morning that couldn’t have been a more idyllic autumn day, we pressed our hands into the soil, blessing it and giving thanks to God for all that it would provide the seeds: nutrients to grow and a place to put down roots. We scooped handfuls of wheat berries harvested from the previous crop—a circle unbroken—and patted them into the dirt in mostly straight lines.

This experience gave my family an opportunity to physically connect with the land, to get to know more about farming practices, and to share in fellowship with those whose vocation it is to care for the land. Even my young son grasped the gravity of our actions. He too placed his hands on the soil and closed his eyes in prayer.

The opportunity to reflect theologically was there at every turn, ready to be pondered by minds old and young alike: What does it mean to be a steward of the Earth? How can we—city dwellers, not farmers—care for this soil, assuring future generations of the same right to bread?

At home I bake with these questions in mind and spend significantly more time, energy, and money to make loaves with flour milled from sustainably grown and harvested wheat. My bread does not become the body of Christ during Mass, but the holiness of the Earth and its stewards are revealed to me as I mix the dough.

In The Bread Baker’s Apprentice, Reinhart describes the baker’s challenge as “evoking from the wheat its fullest potential, finding ways of unraveling the tasteless starch molecules . . . by attempting to spring free the simple sugars that are woven within the complex but unassailable starch carbohydrates.” In other words, the job of the baker is to make bread taste great by extracting as much flavor as possible from its ingredients. It’s done in a simple, ancient process—fermentation—that is quite possibly responsible for the origin of life on Earth.

Active yeast feeds on the sugars released from the wheat after it has been hydrated. As a result it releases a gas and a tangy liquid sometimes called “hooch.” Fermentation literally transforms the ingredients from one thing into another. The baker’s job is to keep that yeast alive until it is time to bake, where it releases its last “breath,” giving a final rise to the loaf, and then dies in the hot oven. The yeast dies to give life to the bread, which is then consumed and gives life to us.

Who knew that such a profound spiritual lesson could be experienced and shared in your own kitchen?

A couple years ago I heard a talk given by the theologian Norman Wirzba, whose best work focuses on how theology, ecology, and agriculture intersect. He told the audience, “Eating is a matter of life and death.”

In my own personal practice I have found that in the baking and breaking of bread we have an opportunity to experience the mysterious relationship between life and death in both profound and ordinary ways. Wheat is alive until harvested and milled. The yeast dies under high heat. The ingredients transform into something else.

The substance that emerges from the oven is something that it wasn’t before. It becomes bread, a food so substantial and nourishing that it can even mean food itself. By breaking and eating it we are given life—not just the nutrients needed to sustain physical life, but what we need to sustain a spiritual life as well.

Is it any wonder that Jesus multiplied loaves along with fish as one of his miracles proclaiming the reign of God? Or that he frequently broke bread with his friends and followers, including on his last night on Earth, when he said the bread he was breaking was his very own body, broken for us?

A portion of this column is taken from a talk the author gave on a theology of bread, which was published on the website Christian Food Movement. It appears here with permission.