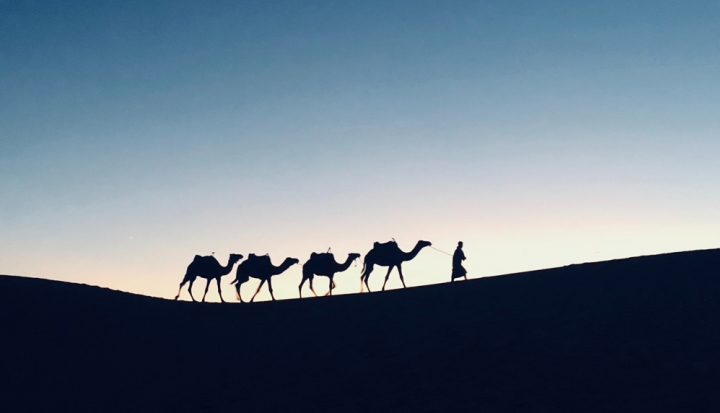 I don’t have a pet. This puts me at odds with the 65 percent of U.S. citizens who choose to share their homes with animals. Forty-four percent of us coexist with dogs and 35 percent with cats. Freshwater fish are the most kept pet by volume, since people tend to keep them by the tank-full. Bird ownership is one-fifth the size of cat partnerships.

Not having “my” animal doesn’t deny me the pleasure of creatures in their natural habitats, going about their existence independent from mine. It would be hard to live on planet Earth and be entirely animal-free.

It’s equally challenging to read the Bible and sidestep the animals. They play mostly support roles, but their numbers are legion.

Perhaps only two incidences of pets are recorded in scripture. The first occurs in a parable the prophet Nathan tells to King David. It’s a pointed story about a poor man with a pet lamb so dear to him that it sleeps in his bosom. Nothing good happens to the lamb, sadly, since a callous rich man fancies it for dinner. David’s outrage at this tale underscores the point brilliantly, as Nathan declares to his adulterous king: “That man is you.”

The other biblical pet has a brighter fate. In the Book of Tobit, young Tobias has a dog that follows him out the door and on the road to adventure. It’s quite an adventure too, as Tobias regains his father’s wealth and acquires a wife. Unfortunately the bride, Sarah, has a demon, which takes some fish entrails to expel. There’s enough holy mojo left in the fish guts to restore elderly Tobit’s lost sight. We hope the dog had as profitable a road trip as his master did.

Once in a while, animals enjoy higher profiles in the drama. It would be impossible to tell the creation story without the fifth day, when birds and fish fill the skies and oceans. Not to mention day six, when other species creep, crawl, saunter, and gallop into existence—including a couple of two-leggers made in the divine image. All these creatures have a vegan diet from the start, which makes their cohabitation a truly peaceable kingdom.

Then a certain serpent takes center stage. This talking animal causes so much trouble that biblical animals are mute after this—with the exception of Balaam’s ass in Numbers 22. Happily, the ass chooses to be on the side of the angels.

After the garden, primordial trust is shattered. Cain and Abel’s one-sided feud erupts over professional differences: Abel’s a herder, and Cain a tiller of the soil. Being a shepherd leads Abel to offer an animal sacrifice to God, which appears preferable to the vegetable sort. Keep in mind, no one’s eating meat at this point. Abel’s herds supplied clothing and milk. The point of the sacrifice is not to feed God but to surrender something that can’t be taken back.

The beef between the brothers highlights the timeless conflict between the flock owner and the farmer. One lifestyle is migrant and free, the other bound to a plot of land. After murdering Abel, Cain goes off to found a city, further cementing himself in place. Herders remain biblically unwelcome to city dwellers ever after.

Animals steal the scene in the great flood epic. Technically, Noah’s the main character here—but you’d hardly know it by the attention paid to the miles of animals clamoring to get on board the ark.

After Noah docks on dry land again, relationships undergo another transformation. It’s open season now between the species, as a carnivorous diet is permitted. An elevated level of violence now permeates the Earth, as each creature sees the other as a potential meal.

Hereafter, most animals presented in the Bible will be beasts of burden, objects of sacrifice, or on the menu. Soon Abraham presides over herds of sheep and oxen and utilizes donkeys and camels. None of these are pets. He’ll easily slice open a heifer, ram, turtledove, and pigeon for his mysterious encounter with God in the firepot. The days of being shipmates in the ark are over.

The next animal in a starring role is the ram that takes Isaac’s place on the altar of sacrifice at Mount Moriah. The ram of Abraham bears a family resemblance to the metaphorical Lamb of God. Rams, lambs, and other creatures are slain in rituals that stretch across millennia, saving Israel from its transgressions one vulnerable life at a time.

Meanwhile, camels serve as unlikely matchmakers. Rebekah kindly waters a stranger’s camels; the stranger is a servant charged with procuring a wife for Isaac, who notes Rebekah’s hospitality as good wife material. Incidentally, Moses procures a wife by watering the flocks of some girls being harassed at another well site generations later. This meet-cute-over-animals still works for dog walkers today.

Once married, Isaac becomes both farmer and herder. His favorite son is a hunter, however—so Isaac cultivates a fondness for wild meat. Lifestyle again pits brothers against each other: While Esau hunts, Jacob’s interests remain domestic. They vie for acceptance in the manner of Cain and Abel—this time not for God’s attention but their father’s. I’m sorry to say many animals are harmed in the making of this story, from the goat meat dressed to masquerade as game to the hunted creature prepared in vain to earn the stolen blessing.

Fast-forward to Moses, who sends hordes of frogs, gnats, flies, and locusts as plagues upon Egypt. Suddenly, animals are weapons of mass destruction. Pestilence, boils, and hail afflict Egyptians and their beasts alike. The paschal lamb is eaten by every Israelite household in preservation of their lives, its blood applied to each doorway.

Yet the firstborn males of Egyptians and animals alike perish in the final plague before Pharaoh is persuaded to let God’s people go. This isn’t the end of animal warfare. Horses drag Pharaoh’s chariots into the dry bed of the Red Sea—and are lost along with Pharaoh’s chariots and charioteers.

Animals continue to be weaponized as late as the era of the Maccabees, when elephants serve as tanks in the endless wars of the period. Soldiers give alcohol to the poor beasts to prepare them for battle. They keep lions hungry to devour a king’s enemies. Still, the lions in a certain den decline to eat Daniel.

God dispatches a large fish to swallow Jonah. This isn’t an act of war but rather a work of mercy for the Ninevites, who need to hear a prophet’s warning more than Jonah wants to deliver it. The fish must have been grateful to dislodge its cargo.

In tracing the history of animals in the Bible, we recognize their misery above all. They do the heavy lifting, are ritually slaughtered in volume, are conscripted to fight humanity’s battles, and wind up on plates at the end of the day.

A few favored animals come back to their trough one fateful night in Bethlehem to find a baby in it. That child will himself become food for the world, take up humanity’s burdens, be the final sacrifice, and fight the ultimate battle against sin and death. The peaceable kingdom is about to be restored.