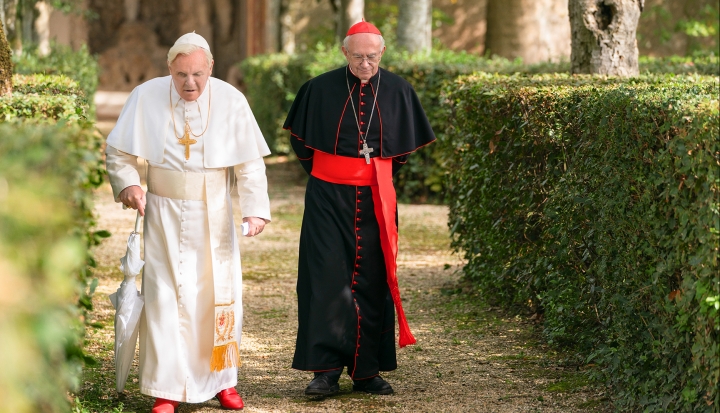 From Netflix’s The Crown to HBO’s Chernobyl, historical dramas are all the rage. While learning some history is part of the draw, most viewers accept that these shows will alter a few facts for the sake of telling a more dramatic story. But when does the dramatization of history cross over into the distortion of it?

This is one of the key questions posed by the Netflix drama The Two Popes. The movie depicts the relationship between Pope Benedict XVI (Anthony Hopkins) and Cardinal Jorge Bergoglio (Jonathan Pryce), the man the world would soon come to know as Pope Francis.

The film begins as Bergoglio travels to Rome to speak directly to Pope Benedict about his desire to retire. Benedict is reluctant to grant the cardinal’s request and interrogates him about his motives. It is ultimately revealed that Benedict is planning his own retirement and is sizing up his potential successor. Their mutual wariness gradually gives way to deeper sharing about faith, the church, and the burdens of leadership.

Hopkins and Pryce are highly skilled actors and the film is an enjoyable character-driven drama. But despite the tagline “inspired by true events,” viewers should understand that it is largely fiction. Bergoglio never travelled to Rome to discuss his resignation and by all accounts his most lengthy conversation with Benedict occurred after he was elected pope.

Perhaps even more disturbing is the film’s implication that it was Benedict who allowed Father Marcial Maciel Degollado to remain leader of the Legionaries of Christ despite mounting evidence that he was a sexual predator. It was during the papacy of Pope John Paul II, however, that efforts to investigate Maciel were repeatedly frustrated. It was Benedict who ultimately removed him.

Knowledge of these facts does not make it impossible to enjoy the film, but it does—and should—complicate our reception of it. In an age when the line between fact and fiction has become increasingly blurred, it is important to know on which side of the line one is standing.