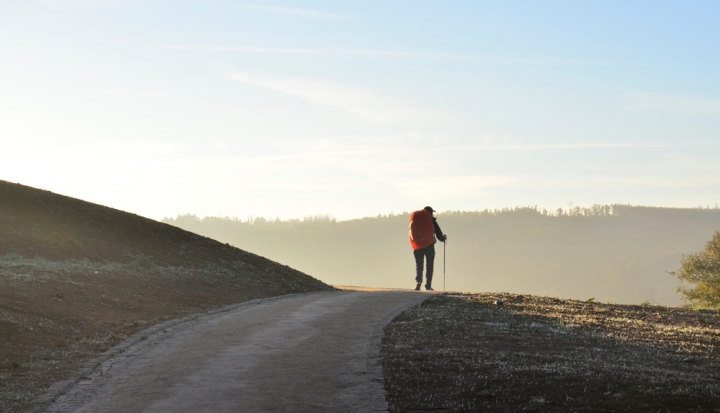 Every fall I do something Spanish to commemorate a time in my life when I did a very Spanish thing. I usually bake a Galician almond cake, called a tarta de Santiago, and sometimes go out for tapas or buy a bottle of Rioja. I do this to celebrate when I walked the Camino de Santiago, a 500-mile pilgrimage route across Spain to the city of Santiago de Compostela in the northwest region of Galicia.

I walked the Camino in 2011, leaving the French village of Saint-Jean-Pied-de-Port in the Pyrenees Mountains on September 22 and arriving in Santiago de Compostela on October 27. The first day I couldn’t even complete the 15 miles to cross the border into Spain. I made it only five miles, as far as a pilgrim’s hostel on the French side. My last day I surprised myself by walking 25 miles, most of them through wind and pouring rain.

I took only one day off from walking to sightsee in Burgos and another day off between Sahagún and León to recover from blisters. I waited just one day after arriving in Santiago before presenting myself at the city’s cathedral to receive my compostela, a pilgrim’s official certificate.

From the start I knew the Camino would be a watershed experience, the kind I would measure the rest of my life against. What I didn’t expect was how its meaning would continue to evolve over time. If you would’ve asked me a year ago what the takeaway of my pilgrimage was, you would’ve received a different answer than the one you would receive today.

Throughout history, pilgrims have completed the Camino de Santiago to reach the tomb of the Apostle St. James (the Greater), housed in the cathedral in Santiago. Scripture says James died in Jerusalem in 44 C.E., but Spanish tradition picks up James’ story from there, claiming his followers sailed his remains in a stone, rudderless boat to the Iberian Peninsula, where James had traveled to preach the gospel before he died.

The followers landed on the coast of Galicia and buried James in a spot that was eventually forgotten until about 800 years later, when a shepherd or hermit, led by a bright star, found a campus stellae, “field of the stars,” bearing a single grave.

The cathedral in Santiago was built to hold the long-lost relics of St. James. During the Middle Ages pilgrimage routes to the location were created. Today, Santiago de Compostela is one of the most important pilgrimage cities in Christianity, along with Jerusalem, Rome, and Canterbury.

After declining in popularity in the wake of the Protestant Reformation and the Enlightenment, pilgrimaging has become popular again in the past few decades. According to the Pilgrim’s Office of the Cathedral of Santiago, in 2018 nearly 330,000 pilgrims received a compostela, almost double the number recorded the year I walked. And that doesn’t even include those who walk only part of the way.

Not everyone wants to claim their compostela, and not everyone wants to get to the end. In the old days pilgrims walked the Camino to earn indulgences or atone for sins. Not as many folks are in it these days for penance. Some are simply in it for the adventure, the scenery, or the exercise.

So, to use a question that pilgrims will ask each other on the Camino by way of introduction, what was I in it for?

In 2008 I had a traumatic experience that damaged my sense of self-worth and my faith. When I tried to report the trauma to a clergy member, I received rejection in the form of the suggestion that I was seeking vengeance and that instead I should forgive. The clergy member’s reaction only added to the anger and confusion I’d been feeling and led to a deep crisis of religious identity.

A lifelong Catholic, even if not always a devout one, I started to question whether forgiveness in this case was achievable for me and, if not, whether Catholicism, Christianity, or any faith practice was right for me anymore. At especially low points I wondered if the problem wasn’t religion or faith but me. Forgiveness is essential to Christian teaching after all, yet I couldn’t seem to get there.

What did that say about the kind of person I was and my chances for healing? If I couldn’t—or wouldn’t—forgive, did I deserve the comfort of belief or the certainty of a faith identity? Could I, or should I, still call myself a Catholic or even a daughter of God?

For help I turned to the usual modern therapies: counseling, tai chi, and writing. But the Catholic piece of my identity didn’t seem to be getting the attention or answers it needed from these activities. I felt that I needed more “deep Catholic” practices beyond praying or lighting votive candles—my usual Catholic comfort standby.

What drew me to the Camino was its process. It’s just walking, getting from one place to the next step by step, and sharing the way with people from all over the world with their own backgrounds and experiences. Within the process is room for personalization, for the expression of your own particular humanness in the midst of a wider, shared humanity. From day one on the Camino I learned to set—and, more importantly, respect—my own pace and pilgrimage style and everyone else’s.

Some people will walk faster than you, some slower. Some pilgrims won’t settle for covering anything under 20 to 30 miles a day. Some will leave the Camino early, forced off by injury or an emergency back home. Some pilgrims travel with personal mementos such as family heirlooms or little luxuries such as makeup (that was me). Some, so I hear, try to walk the Camino barefoot. Some sleep in ancient churches and convents along the way (also me), while others opt for camping or staying in hotels.

There’s no right or wrong way. The Camino is for anyone, regardless of reason or faith identity, but your pilgrimage is your own. You do you, one step at a time—that’s all a pilgrimage is.

As for my struggles with forgiveness, I admit that by my Camino’s end I still couldn’t get there. And for a long while I thought maybe it was a sign to say goodbye to Catholicism, Christianity, and even my belief in God.

That is where my funny little Spanish anniversary rituals come in. They’re gestures, tokens of an experience far too complex to reduce to a cake recipe or a plate of patatas bravas. But by setting aside time to bake a cake or indulge in a bottle of Spanish wine every year, I also set aside time to reflect on the days I spent walking across Spain and compare them to  the days of my life before and since then.

I dedicate time to following a process again, one that helps me check in with where I’m currently at with forgiveness, acceptance, healing, and faith identity. Because they’re all processes too, all pilgrimages. Being human, alive, and a child of God means each of us takes them at our own style and pace.