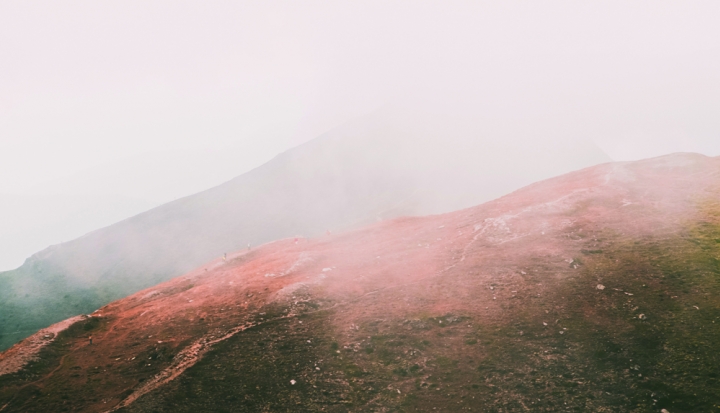 I took a class on “ecowriting,” and the first assignment was to pull some weeds. It was an unseasonably hot and humid October, so I chose not to pull the weeds from around my tomato plants. I still wanted to honor the assignment somehow, so I walked past the football field behind our house to a wall of overgrown brush.

I followed it until I came upon a break I didn’t expect, a path into the shade, maybe the same path my son and his friends take to fish in the creek. Once they caught a tiny sunfish and a crawfish and wanted to cook these meager spoils over the fire, but our neighbor said not to eat from the creek because it is full of runoff from the cornfields and the water treatment plant. So we let the cats at them. They declined.

I live in what used to be a farming community, though we’re only a dozen miles from a major Midwestern city. Now it’s mostly known for high school football and a vintage Tastee Freez right out of a Mellencamp anthem.

I studied the overgrowth and realized I don’t know the names of these weeds. Is this feverfew, chamomile, or some other daisylike bloom that my children would pull for me to put in an old milk bottle? I found a cornfield at the turn in the path. The wind through the drying stalks sounded like the waves of the ocean. Past the cornfield was the gate to the water treatment plant.

The path wound down to Sugar Creek, probably named when its water was sweet and its meats edible. Now it’s a postcard from the Anthropocene: On the banks lie a pile of some cracked and discarded concrete structure, trash, and the ends of a bonfire, probably from the previous week’s homecoming game.

I have lived in places of great natural beauty—even places that appeared, to the naïve eye, mostly undisrupted. The Gulf Coast. The Blue Ridge Mountains. The northern coast of Michigan. But it isn’t easy to find natural beauty, or any scene that might inspire spontaneous praise or pastoral poetry, in my current home.

Here I mostly find a landscape of mourning. But the terrain of grief is also worth writing about. It is becoming urgent, in fact, that writers tell this story of absence and loss. Since I read Laudato Si’ (On Care for Our Common Home), I have wondered how artists might answer Pope Francis’ plea—a plea that runs throughout the history of Catholic spirituality—to care for our common home.

“If we say something has died, can we also say it once lived?” asks Lacy M. Johnson in “How to Mourn a Glacier” for the New Yorker. She traveled to Iceland to join the prime minister, scientists, activists, farmers, and children at the base of Okjökull, a glacier declared dead in 2014. Oddur Sigurðsson, Iceland’s leading glaciologist, called Okjökull’s death a major loss. “A good friend has left us,” he said.

The experience is becoming more common. The Gulf Coast of my childhood is visibly shrinking and becoming unrecognizable. Increasingly violent storms are wiping out what I remember as home. We all know what it’s like to lose landscapes to development: Do you remember when the woods near your home became that now deserted strip mall? Now we will also feel the effects of loss due to diminishment and disappearance.

Ecological grief as a mental health response to climate change was the subject of a recent article in Nature, but “despite growing research interest,” the journal argues, “ecologically driven grief . . . remains an underdeveloped area of inquiry.” The central problem of Johnson’s New Yorker essay is also the problem of climate change: We grieve what we know and love, and most of us have lived our lives disconnected from the natural world, unaware of our deep relationship or that our thriving was always dependent upon its health.

“When asked how they felt about the death of Okjökull, some people shrugged and said that they were sad,” Johnson reports. “Others admitted that they were hearing its name for the first time.”

Johnson’s story was nonfiction, but it speaks to the current mood of ecological art, which is one of prophetic mourning. “Eco-lit needs to delve deeper into portrayals of how environmental degradation leads to human agony, suffering and displacements,” writes Rajesh Subramanian for the Wire. The art of climate change should resist a too-easy hope.

In the ecowriting class, we read the poetry of Joy Harjo and T. S. Eliot’s The Waste Land with new eyes. We wrestled on the page with our responsibility for damaged ecosystems, with death as an ecological event, and with bodily disability and disease as ecological phenomena. But the most important lesson, for me, was to sit intentionally with the discomfort of my own home and consider how that discomfort may become deadly. The best directive was to get to know the life I am losing, so that I might be inspired to do the work to save it.