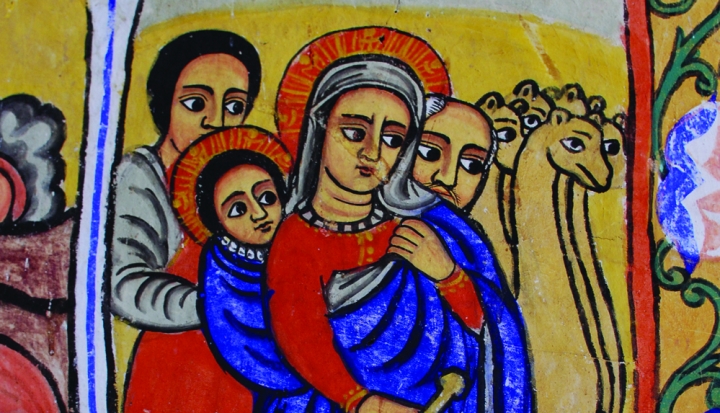 The account of Jesus’ birth in Luke’s gospel is a familiar story. It relates a miraculous conception announced by an angel; a young girl’s trusting assent to this divine message; a birth in a cozy stable (the rude smells overlooked by countless Christmas pageants and Las Posadas processions); a joyful announcement by an angelic chorus; and a touching scene of awestruck shepherds greeting a newborn child. Luke’s infancy narrative shapes our imagination of the Christmas story into a tale of glad tidings and hope-filled joy.

But the gospels give another account of the events surrounding Jesus’ birth—one that is less amenable to romantic or comforting embellishment. In Matthew’s narrative, the circumstances of Jesus’ birth are more chaotic and perilous.

His conception is greeted with confusion and suspicion over the scandal of an unplanned pregnancy. The highest political authorities react to his birth with alarm. With cold calculation they ascertain his likely age and location. With relentless cruelty they seek to “destroy” the child and any other who could possibly be a threat.

The family flees in terror, leaving all they knew in a desperate quest for safety to seek asylum in a neighboring country. Even in relative safety, the horrific massacre of innocent children haunts them, as they are warned not to return to their original home but to make a new beginning in Nazareth.

This Christmas story is not portrayed in manger scenes or church crèches. This is the Christmas story not told to children and, therefore, not often reflected upon by adults.

Yet it is part of the gospel. Without Matthew’s account, our understanding of Jesus is incomplete, if not whitewashed. Without it, Christmas comforts but does not challenge.

I believe Matthew’s infancy story is hauntingly relevant given our national discourse. Reading Matthew’s Christmas account in light of today’s headlines, I wonder: What if Egypt had closed its borders to asylum seekers fleeing danger and persecution? How would the Holy Family have fared had Egypt spent its resources erecting high walls to enhance its security against “hordes” of “invaders” and “infestations”—the untold thousands of families who undoubtedly ran to safety given the threat to their children?

What would have happened to the Holy Family if it had been separated at the Egyptian border, if Mary and Joseph were forced to return to Jerusalem without Jesus?

What scenes would be on our Christmas cards today if Jesus was forced to live in an Egyptian internment camp, in a cramped cell crowded with other separated children enduring the trauma of living in a foreign country without parents, familiar language, or even heat or access to sanitation?

I can hear some readers objecting to this politicizing of the gospel, accusing me of hijacking Christmas and robbing the holiday of its cheer. But even Luke’s gospel tells us that Jesus, Mary, and Joseph would not have been among the kind of immigrants that would be considered desirable today. And Matthew’s gospel tells us that Jesus was such a threat to national security that he required an extreme emergency response.

The gospels are clear: The Holy Family is exactly the kind of refugees rent asunder by our nation’s policies.

Christmas celebrates the mysterious reality of God assuming human life and walking among us. The scandal of the incarnation is that God takes the form of the least desirable of us and tells us that the measure of our response is the acid test of our holiness.

This Christmas I will again arrange the manger scene in my apartment and reflect on the events of long ago. But this year I will place around the crib pictures of children in the camps on our southern border and pray for parents who are celebrating Christmas far from their young children. I also will pray for a nation whose policies are crueler than those of biblical Egypt.