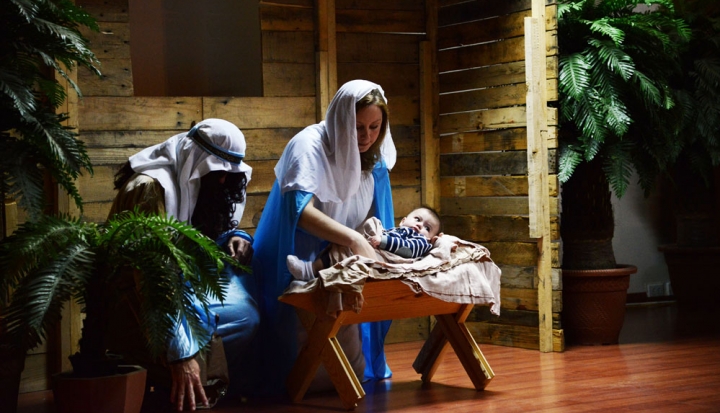 Two years ago, when we were already busy with three young children, our family was blessed with Ezra. Right away we knew our fourth baby was the most go-with-the-flow of the bunch; he basically had to be, constantly consumed by the chaos of our busy lives. He was baptized on the first Sunday of Advent and we looked forward to celebrating the Christmas season with another child in tow.

Despite the shorter days brought on by December, my hours as a mother seemed long and unending, circling the clock and overflowing with all the needs of my four children. Added to my plate was the proposal of Ezra playing the baby Jesus for Christmas Eve Mass.

I’ll admit I was honored—my prideful agreement was nothing of Mary’s humble fiat. My expectations led to defeat, however, when Ezra cried his way through the entire rehearsal.

The text message that followed didn’t help, it read, “Don’t worry. We have never had a baby Jesus cry on Christmas Eve.”

It was meant to calm my nerves, but it didn’t. I was sure my baby, my sweet little 3-month-old boy, would ruin the pageant, wailing and flailing as the Christmas story was told. Mom-guilt washed over me because maybe it was my fault. Maybe I ate something that didn’t agree with him or kept him up too late.

My mind fast-tracked to Christmas Eve Mass, and I envisioned myself having to cut through the swath of children at the foot of the altar, past the young angels and shepherds and magi, and be that mom grabbing the baby Jesus from Mary’s arms and trying to soothe him in front of the entire congregation.

The text message was true, in all the years we had been attending the Christmas Eve service, I, neither, could recall one instance of an unhappy baby Jesus. But don’t worry, Ezra didn’t break the streak—he did great.

Christmas Eve came and we readied our family for Mass. I nursed Ezra, made sure he was comfortable and clean, and gave him a pacifier, which modernized his role slightly but was worth it. To my surprise he slept through the whole thing, as peaceful as the baby Jesus himself.

As I watched the angel place him in Mary’s arms on the altar, I was reminded of the gift our children are. They do come with a fair amount of challenges, but each challenge is only another opportunity to invite God into our lives.

One of my favorite Christmas songs right now is Mary Did You Know, written by Buddy Greene and Mark Lowry. It is a beautiful and contemplative take on motherhood, specifically Mary’s motherhood and how her role harmonized with Christ’s mission on Earth.

Of course Mary knew many of the things mentioned in the song. Scripture tells us that she knew she was raising the savior; she knew he was God incarnate, and despite her sinlessness, she knew he would be her savior also. Mary generously accepted all of these things in her fiat, her renowned “yes” to God, welcoming the responsibility of the Christ-child.

When we welcome children into our lives and into the light of Christ, we need to be like Mary and accept all that God has intended for their lives, even when we know they may be difficult to endure. As mothers we can look to Mary and find strength in her—both ordinary and extraordinary.

It is so easy for us to see the Divine Jesus. That is the Jesus we know through scripture and Mass, but let us not forget our human brother Jesus. He was born in a cold, damp stable. His young mother must have felt the stress and trauma of her unusual birth story. We know angels, shepherds, and magi all welcomed him into the world, and that the family found refuge in Egypt for a time, but after that we have to assume he had a pretty normal upbringing in the small town of Nazareth with his family.

This Christmas season Ezra is in the throes of age two. He spends most of Mass messing with the kneelers, running the aisles, and begging to see into the baptismal font. I have to think, as divine as Jesus was, Mary was clearly raising a human boy complete with all the ups and downs and mischief they can bring.

Although she surely understood all of the things questioned of her in Mary Did You Know, I’d like to believe, in her humanity, that Mary probably got mom-brain once in a while. She probably got nervous and scared and unsure of her capabilities as a mother. She was busy raising a child, a human child, and although the world was vastly different then, I would bet that child still kept her busy with all of his childish ways.

We cannot ever know what it is like to be sinless; the only humans to walk this Earth that could were Mary and Jesus. But even without being burdened by sin, they were still both fully human and knew the emotional joys and sorrows all humans endure. Saint Irenaeus, born in the Second Century, claimed, “the glory of God is man fully alive.”

God gave us our human nature; remember we are made in his image. He gave us Jesus not only to forgive our sins, but also to give us new life. I have no doubt that despite the short gospel pages, Jesus led a full life, full of the same struggles and desires and emotions that our own lives are full of. God also gave Jesus a beautiful, grace-filled mother, so that she could usher him through his humanity, fully human and fully alive.

I have to believe that Mary, despite her squeaky-clean soul, had to ask for God’s help often. Authentic vocations will requires that openness and dialogue with God. In believing that Mary did not have all the answers to the complexities of motherhood makes me feel a little more worthy of my role. Motherhood is a messy game, but when you consider that the mother of God, the self-proclaimed lowly handmaiden that carried our Savior in her womb, was in the thick of it once just like we are, it makes it a little bit easier.

One of the many motherhood takeaways Mary gives us is that our children are not really ours. They are individuals created in God’s image and although we are their guides, in the beginning especially, our children will be making their own choices one day. There are plenty of times Mary cringed at Jesus’ actions. Not because they weren’t right or rooted in good, but because she knew the consequences of them. But she also knew that his choices were his own to make. God’s grace makes that possible for all of us.

We never know what our kids are going to do or come up with next, and neither did Mary, but faith can make all the difference. Faith that our God is with us, he is in our breath and in the breath of our children. He sent Jesus to walk among us, so that we could have every opportunity to live in the glory of God by being fully alive in every season of our time here on Earth.