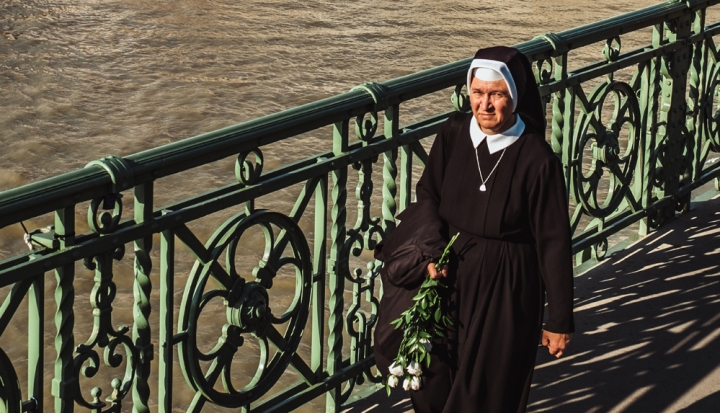 I’m a debutante in reverse: This month I’m entering a Trappist monastery. It’s not something Catholics hear about too often, though vocations to monastic communities have not declined nearly as drastically as they have to active communities. I suppose I’m writing now, before I get to the cloister, because once a candidate gets to the point of begging permission to go in, she hopes never to come out. And so I’d like to say good-bye to the world.

Don’t get me wrong. I’m not fleeing the world because I hate the world and everything in it. On the contrary, the world has been very good to me. I was brought up well, had a happy and carefree childhood, and in another age I might have been a real debutante.

My senior year in high school I applied for admission to Harvard, Yale, Princeton, and four other top colleges in the country and expected to get into all of them. I did. I went to Yale. I was counted among the best and the brightest. Still something was missing.

That something was faith. I’d become a Christian the summer before my senior year in high school, but it wasn’t until my junior year in college that I finally came home—to the Catholic Church. I was confirmed a Roman Catholic on my 21st birthday, which fell on the Fourth Sunday of Easter, 1978.

I see my desire to be a contemplative, which has steadily deepened in the past two years, as a continuation of one and the same call: to be a follower of Jesus, to be God’s alone. To allow him to do with me as he wills. It is one and the same Lord who calls.

Now why did I just do that—establish my credentials for success in the very world I am leaving? I suppose for the same reason St. Paul boasts in his letter to the Philippians:

Those who think that anyone with a reasonable amount of intelligence could not possibly want to enter a monastery should think again. It’s not that I want to run from the world so much as it is that I want to run toward something else. I have come to believe, with Paul, that Jesus Christ alone is important. Nothing else matters.

And so once again I have applied for admission—to a different sort of institution. I’ve done it with the conviction that I can do nothing else. I see reality in terms of death and resurrection, sin and forgiveness—and for me monastic life lives out that gospel best.

I exist to know, love, and serve God. Poverty, chastity, and obedience are positive choices, not merely vows that come along with being a nun. It is good to live simply, to align oneself with the poor as Jesus did. It is good to love God so much that even his absence is preferable to the presence of any other. It is good to learn to give up even one’s own will, perhaps that which si clung to most tightly, even as Jesus did in the garden.

That all makes monastic life sounds very pious and romantic. There is nothing romantic about getting up at 3:15 in the morning for vigils. I did that for a week on retreat and I wondered how I could possibly do that for the next 50 years.

But it’s all part of a life of solitude and silence, prayer and penance, and I want that. And is that lifestyle really so different from what people in the “real world” encounter?

Parents wake at 3:15 in the morning to warm a bottle or tend sick children. Those without the security of a job cannot afford meat. Those whose circumstances (it need not be death) keep them far from family and friends know that separation is hard. All without the benefit of seeming pious and religious.

Perhaps God merely wraps the vocations of being human in different packages.

And that’s my point. This is not meant to be simply an apologia for my (apparently monastic) vocation. Unlike Thomas Merton or St. Paul or so many other famous converts, I had no major traumas, no blinding conversion experience, no radical switch in lifestyle or morality.

I was already a good kid. Should it be so surprising then that I seek the highest good, God himself? Christians hear so often only of the extraordinary, the radical conversions, the extremes of the saints. That tends to take the business of being good—of following Jesus—out of the ordinary.

Each day is a chance to see God anew, to see God in others and in the very human (and sometimes irreligious) situations in which people find themselves.

To be Christian is to be human first. As St. Irenaeus said, “Gloria Dei vivens homo”—the glory of God is a human fully alive. Christians should not spend a lot of time trying to figure out whether they “have a vocation”—as if it were a recessive gene or something hidden behind their left ear. All Christians have a vocation: to be fully human, to be fully alive.

Enjoy life, be human, have faith, and that will reveal God and God’s glory—which is all monk or nun tries to do.

My entrance date is May 31, the Feast of the Visitation, the feast of bringing Jesus to others. There is a paradox in that, that on a feast of going out to others I should be going in, apparently away from others. But the paradox is that by entering a cloister I am in reality closer to others by the mystery of the power of prayer. Somehow my prayer and the prayer of my Trappistine sisters will bring Jesus to others.

The contemplative, after all, leaves the world only in order to pray for it better. I ask your prayers and promise you mine.

From the U.S. Catholic archives