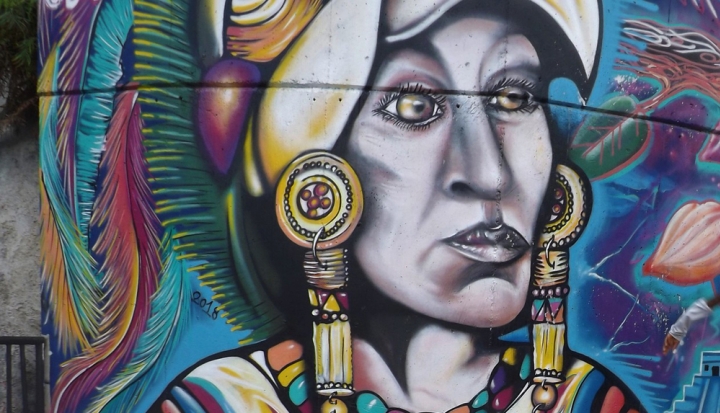 In 1999 a television movie, Mary, Mother of Jesus, retold the story of Jesus through the eyes of his mother. It was my first semester at Fordham University and my resident assistant organized a viewing and invited the program’s theological advisor, Elizabeth Johnson. During the discussion, Johnson explained how she worked with the production team to ensure biblical and historical accuracy where possible.

However, on Mary’s iconic blue veil, the producers would not budge because viewers expect to see Mary in blue. Yet drawing closer to Mary, and by extension to her Son, requires setting aside our expectations and getting closer to our neighbor.

Recent encounters with two very different Marian images made me reflect on this tension between Miriam, a poor peasant woman in first-century Galilee who could not afford a blue veil, and our expectations of Mary, the Mother of God.

One encounter was from the Synod of the Amazon, the other from a Catholic protest action in Newark, New Jersey. In both cases, Mary is intimately aligned with those on the margins challenging theologies that envision the Queen of Heaven as disconnected from the world.

On October 4, as the Synod on the Amazon began, a wooden statue of a pregnant woman was presented to Pope Francis during a tree-planting ceremony in the Vatican Gardens. To the Indigenous woman who presented it, she is Our Lady of the Amazon.

Almost immediately, outrage and consternation at the possibility of identifying this statue as Mary erupted. Paolo Ruffini, prefect of the Holy See’s Dicastery for Communication, said, “She represents life.” An outraged segment of Catholic Twitter insisted she is merely Pachamama, an Andean goddess.

The hysterical and hyperbolic response to indigenous images within Roman Catholic spaces was striking. I still cannot understand how small, wooden statues of a kneeling pregnant woman were somehow disrespectful to the Blessed Virgin Mary, whose Magnificat reminds us that God “exalts the lowly.” No one culture can lay claim to Mary or to her Son.

Although not a typical representation of Mary, the image of the pregnant Amazonian woman certainly portrays a deep connection not only with life itself but with Miriam of Nazareth, a young, pregnant woman on the margins of the social and political world.

On October 21 two Catholic men broke into the Church of St. Mary in Traspontina in Rome, stole the statues, and threw them into the Tiber River. They filmed their crime as if it were a heroic act of piety.

As journalist Liz Dodd pointed out, “Our Lady of the Amazon may not look like Our Lady of Lourdes, the Black Madonna, or Our Lady of Guadalupe, but she points the Catholics who brought her to Rome towards her son. I cannot imagine how it must feel for them, many thousands of miles from their homes in the Amazon basin, to discover that she was drowned in the Tiber, by the very people who claim to be their brothers and sisters.”

A Mary who radically accompanies the oppressed, marginalized, and vulnerable is most clearly represented in the devotion to Our Lady of Guadalupe. “Guadalupe,” as theologian Nichole Flores notes, “comforts those on the margins of society even as she equips them for action.”

This tradition has also led to many contextualized icons of Mary, Jesus, and the Holy Family. In Mother of God: Protectress of the Oppressed, artist Kelly Latimore offers a powerful Madonna and Child as Central American migrants clad in a silver mylar blanket behind a chain fence. In September I processed behind this icon with several hundred fellow Catholics in prayerful protest of ICE policies in Newark.

Resistance to enculturated images of Mary, Mary with Jesus, the Holy Family, or simply Jesus is often a symptom of underlying racism or ethnocentrism. Resistance to the sacred image is a proxy for resistance to encountering our brothers and sisters.

“Beauty unites us,” reminds Pope Francis. “It invites us to live human brotherhood, countering the culture of resentment, racism and nationalism which is always lurking.” When we let go of our expectations, we open ourselves to our neighbor, to a deeper relationship with Miriam of Nazareth and to her Son.