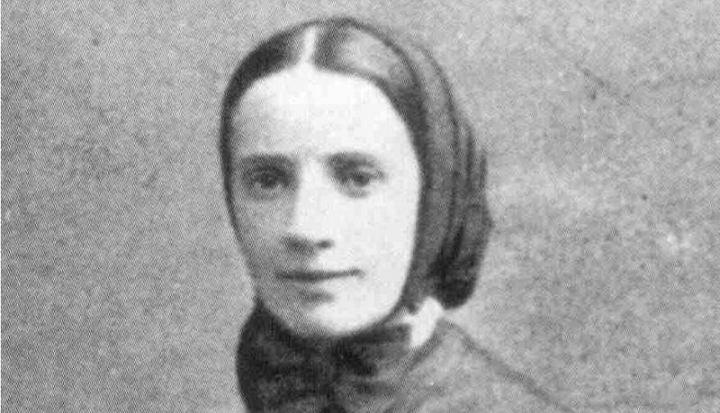 I was born in a Little Italy in upstate New York, where my aunt and uncle ran a small grocery and a large apartment building. When I was 5, my uncle gave me a bag of fresh bread to bring to the sisters next door. My kindergarten teacher opened the door, hugged me and the bread, and gave me a beautiful African violet plant and a holy card of Mother Cabrini.

“When she was your age,” the nun said, “she used to pick violets on the riverbank near her home in Italy. She pretended the flowers were missionaries and sent them in paper boats toward China.”

I left that convent intending to do likewise with the violets. Unfortunately, we were surrounded by a sea of cement. So I gave my mother the flowers and kept the holy card near my bed. In the coming years I read all I could about Francesca Cabrini.

The grown-up Cabrini was considered too frail for convent life, so she started the Missionary Sisters of the Sacred Heart. When the pope turned her dreams away from China and toward America, Mother Cabrini and six former orphans sailed for New York City in 1889, ministering to Italian immigrants holed up in steerage with their cardboard suitcases. My aunt, uncle, grandparents, and father followed not too long after.

The sisters passed through Ellis Island and landed homeless and penniless in New York City’s Little Italy. There they found women and children in rags raiding garbage cans and sleeping in doorways. After a night on a bed of straw and leaves, the sisters brought empty baskets to be filled by the Italian grocer, the fish monger, and the baker down the street. There was never enough food or heat but more than enough reason to trust God and the goodness of others.

They taught catechism in a church basement and ended up building a school. That was just for starters. “Like St. Teresa, with five pennies and God, I can accomplish many things,” Cabrini said. She and her community were like loose change in God’s pocket, and God worked wonders through them.

This frail woman was resourceful and tireless in helping others, the same qualities I found in my parents and immigrant relatives. Mother Cabrini traveled from New York to Chicago, Philadelphia, Los Angeles, Seattle, and down the dark shafts in Denver to miners who couldn’t believe their eyes. She went to England, France, Spain, and Italy, and crossed the South American Andes on a mule. An orphanage, school, sanitarium here; a day care, nursery, hospital, mission church there.

In each new place she began in the same old way, with prayer and begging, showing that when we approach God and each other it is best to go with an empty basket.

The first canonized American saint, an immigrant, Mother Cabrini was not perfect. This I find consoling, being among the imperfect myself. When asked to start a hospital, the nun protested—her sisters were not trained as nurses and, she admitted, she found the work repulsive.

When she dreamt about the Blessed Mother herself nursing the sick “because you won’t,” she conceded and started Columbus Hospital in New York City—with enthusiasm. My wily, blue-eyed countrywoman won political and financial support from her paesani by naming the hospital in honor of their hero.

I don’t know if it was the violets, the holy card, or living next door to a convent, but when I grew up I, too, entered a religious community that taught and nursed first and second generations of immigrants. I took Mother Cabrini’s five pennies and added hundreds of shiny ones for schoolchildren to place wherever they saw something beautiful—be it a dandelion, the school water fountain, a statue of Our Lady, their father’s hands. That was just for starters.

I recited poetry from atop the teacher’s desk, bribed children with delightful notepads—which I begged from printers—prayed, sang, and twirled long colored streamers with them, bargained posters and books for well-written essays, used high drama and Cabrini-like wile to inspire willing and unwilling students alike.

Today my former Little Italy is home to new cultures and new immigrants from Burma, Senegal, Syria, Cambodia, Thailand, the Sudan. Now I bring Mother Cabrini’s pennies and baskets of school supplies to help the children write stories and draw pictures of their homelands, to help them see beauty. At Christmas I ask a suburban church for special wrapped toys and clothes for each child, remembering how Mother Cabrini spent the last night of her life wrapping Christmas candy for children.

Sometimes I put my own stories into paper boats and send them across perilous seas to readers in lands I shall never see. In all of this, I am guided by Mother Cabrini’s simple wisdom. Cardinal Samuel Stritch of Chicago pinpointed it on the day of her canonization. “She saw God in every man, woman, and child. She loved us.”