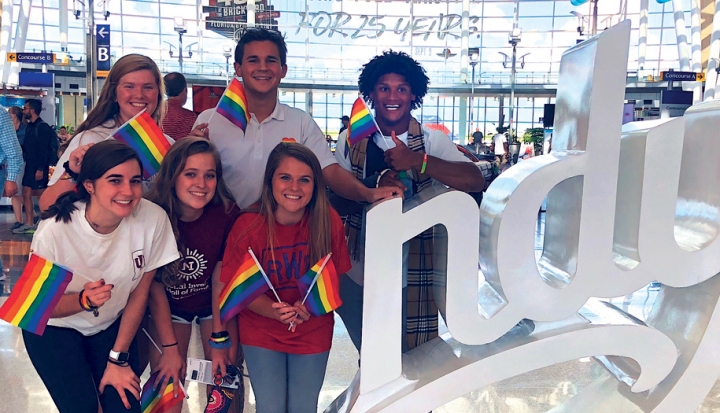 Shelly Fitzgerald gushes over the kids who formed the advocacy group named for her, saying they saved her life. In August 2018, after 15 years of successful employment at her Catholic alma mater, Roncalli High School in Indianapolis, Fitzgerald was abruptly given an ultimatum and required to choose between her job as codirector of guidance or her same-sex marriage.

Years of service to a school Fitzgerald loved seemed to be forgotten as officials slid her marriage certificate across the table. She had been publicly outed. She was placed on administrative leave and subsequently banned from campus. The Archdiocese of Indianapolis labels teachers, guidance counselors, and administrators as “vital ministers in sharing the mission of the Church. . . . [They] must convey and be supportive of the teachings of the Catholic Church,” thus leaving no room for an employee to be involved in a same-sex marriage.

Fitzgerald lost her employment but gained plenty in terms of love and support from a community of students, strangers, and friends. Right away, a small group of Roncalli High School students began planning and protesting to get Fitzgerald’s job reinstated. These six students formed Shelly’s Voice, a Catholic LGBTQ+ advocacy group, in the fall of 2018.

These students did not set out to be change agents within the Catholic Church. They were just trying to get through high school, get into good colleges, and have a little fun. But like so many social justice activists before them, they heard their calling and could not sit by idly.

While Shelly’s Voice fell short of reinstating Fitzgerald back to her original role, its members are now accomplishing so much more. With one year of activism under their belt, Maddie Aldrich, currently a high school senior at Roncalli, and Dominic Conover, now a freshman at Butler University in Indianapolis, are passionate advocates aiming to bridge the gap between the LGBTQ+ community and the Catholic Church. Their work—and the work of the other four students in the group—is deeply informed by their Catholic faith.

How does Shelly’s Voice Advocacy Group put LGBTQ+ rights within the context of Catholic faith?

The whole point of Shelly’s Voice is to not let people leave the Catholic Church, but instead to inspire them to stay in it and fight for change as parishioners. If we took our passion for our Catholic faith out of our advocacy, then the group would be one of hate rather than one of love. I think our Catholic identity and our board’s Catholic identity represent that.

Why did you feel it was important to do this as Catholic students?

In the past, I have to admit, I was ignorant of some types of discrimination. I didn’t know it could happen in my Catholic community, and once it did, it was truly eye-opening.

Do you feel called by God in this mission? Would you have chosen this path for yourself?

Maddie: I feel like God’s plan is supposed to push you out of your comfort zone. It’s probably something way different than you would have expected, but God won’t give you a battle you can’t handle.

If I could’ve chosen to have a normal junior year—normal football games, normal weekends, without planning meetings and all that—I think at first I would have. There was a lot of stress, and I suffered. I was definitely pushed out of my comfort zone.

But looking back, I have been able to use talents I didn’t know I have. I learned I love to write. I learned how impactful my voice can be, and that has helped me to be more open, accepting, and kind to everybody. I didn’t know this was God’s plan for me, but now I believe it is and I don’t think I would change it.

Dominic: I don’t think God’s plan is ever easy or comes without struggle. My senior year was full of struggle. When I chose to start advocating for Shelly, I didn’t realize how much of my senior year was going to be taken away for simply pushing for equality. I feel like I lost my senior year. I feel I had to grow up sooner. But I also think the struggle has made me into a more intelligent and more compassionate person.

Do you have a Bible verse that motivates your advocacy work?

Dominic: Matthew 22:39 says love your neighbor as yourself. Another biblical story I always think about when motivating myself for the next steps is when a woman was caught in adultery and people wanted to stone her. Jesus says, “Don’t raise this stone and don’t throw the stone at the woman.”

I feel like many people in the Catholic Church are both raising the stone and throwing it at people in same-sex marriages. And what I would say is, “Jesus told us not to throw the stones. So why are you doing it?”

Maddie: I was with my mom when she got a text from Shelly about what had happened. I was shocked. I knew I had to do something. I had all these thoughts whizzing around my head, and I knew I needed to call Dominic. I’ve always admired him. At the time we were both student council presidents, and although we didn’t know one another personally, we instantly hit it off and started planning our support of Shelly.

Dominic: Shelly Fitzgerald was our high school guidance counselor. She was asked to leave the school because she was married to a woman. That news broke over a weekend and spread very quickly. Every moral teaching of love and acceptance I had been taught pulled me to stand up for her. Many of us felt that way.

On the Monday we got back to school we organized a protest. Many students, including those of us who would become the founding members of Shelly’s Voice, spread the word to bring flowers for Shelly. We said a prayer and took the flowers into her office.

Maddie: She wasn’t there, but we placed the flowers on her desk—there were so many flowers that it looked like a garden. We passed out little rainbow heart stickers and they were like our sign, our symbolism that we stand with Shelly. The movement just took on a life of its own.

How did all of this fit into your teenage lives?

Maddie: It was hard in the beginning—it was unhealthy. My friends were going to football games and out to dinner, and I was planning media statements. It was a lot of stress. We were both super involved with student council and dance marathon and sports, so there was not a lot of balance. It was rough.

Dominic: We would stay up until two or three in the morning writing statements and organizing. We formed a board, so now we are better able to divide and conquer. Currently we have five chair members, all from the founding members, and we each lead a committee. We have over 30 board members, some youth and some adults who help us on our committees to advance our mission as a board.

Who supported you in starting this work?

Maddie: My parents have never stopped supporting me, and I’m really thankful for that. I didn’t realize how unwavering their support was until I saw other people who didn’t have that level of support. Shelly has never left our sides. We have an awesome board now comprised of people from all different walks of life who always have our best interests at heart.

Dominic: There are six founding members of Shelly’s Voice. What is funny is that none of us really talked to each other before this all began, but we saw one another participating in the protests and passing out the stickers. We banded together and all went in to the first meeting with the archbishop together.

What compels you to keep Shelly’s Voice going?

Maddie: People like Shelly, people full of love and kindness. I have a lot of friends who are students at Roncalli, and after all this they tell me, “Thank you for being our voice.” Even connecting with just five people can save somebody’s life. That’s what makes it worth it for me.

Dominic: My main motivation is the mental health of the students at Roncalli and of Catholic students across Indianapolis. I’m constantly worrying about what impact archdioceses’ decisions have on students, and I believe that Shelly’s Voice gives students a light to see that there is a catalyst for change—that there are students willing to step up and support the LGBTQ+ community.

What has Shelly’s Voice accomplished in the past year?

Dominic: On December 4, 2018 we held our launch party, where people wrote over 100 letters for change. Our supporters wrote letters to the archbishop of Indianapolis, to Superintendent Gina Fleming, and to other Catholic Church leaders expressing their desire for change in the Catholic Church.

In April 2019 we launched PRISM, a Gender and Sexuality Alliance (GSA) for Southern Indianapolis. We noticed that some students, like the ones at Roncalli, don’t have a fully functioning GSA where they can express their feelings on gender or sexuality. Many students at Catholic or other private schools don’t have access to that type of club. We wanted to create an environment where these students have the opportunity to feel welcome at a GSA outside of their school.

We conduct Safe Zone trainings, which are mostly for LGBTQ+ allies. Shelly’s Voice has been working to educate fellow Catholics by giving them an opportunity to learn more about LGBTQ+ vocabulary, false assumptions, and other topics that deal with sexuality and gender. It’s a one-time, two-hour class, and once completed you are Safe Zone certified and have the knowledge to be a healthy and powerful ally.

We are also in the middle of another letter-writing campaign, which was launched over the summer and will be ongoing, because we see the importance of Catholics and Christians writing to church leaders and expressing their disappointment in how the church has treated LGBTQ+ people and same-sex marriages. We also see the importance of others asking for change, so that it’s not just Shelly’s Voice doing that.

Do you think the present-day Catholic Church is capable of change regarding equal rights for LGBTQ+ parishioners?

Dominic: We are most focused on making change within the Archdiocese of Indianapolis, but absolutely I think the Catholic Church will change: It has to. Seventy percent of Catholics believe society should accept LGBTQ+ people. So if the Catholic Church doesn’t make the change quick enough, if they never make that change to being fully inclusive, 70 percent of Catholics are going to get fed up.

How should Catholics engage with LGBTQ+ issues?

Maddie: We can’t run away from them. What happened to Shelly has definitely rocked my faith. So many people have suggested to leave the Catholic Church, but I love it. I went to Catholic preschool, grade school, and high school. I have had an amazing experience. I had some teachers who single-handedly saved my life. I feel like if I left, I’d be running away from the issue. I am Catholic, and the God I know and have always been taught about does not discriminate. God doesn’t pick and choose who to love.