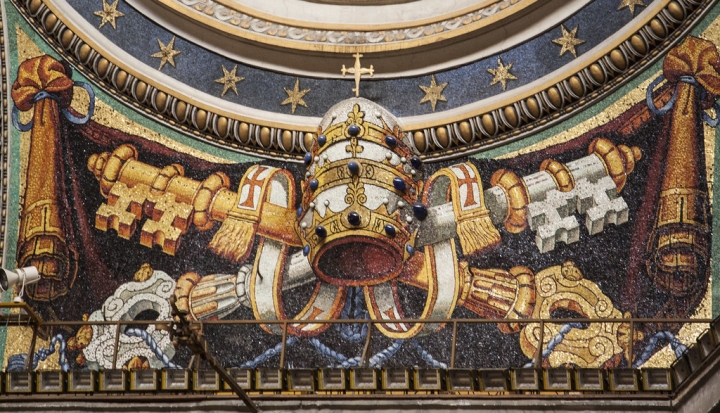 I had an opportunity recently to sit in on a discussion of Catholic integralism among a number of scholars who have been at work promoting the movement. Catholic integralism has come to renewed prominence recently, although it is among the oldest ideas in Christianity. (Importantly, we should note—integralism is not as old as the gospels.)

Catholic integralists believe that, “rendering God true worship is essential to [the] common good, and that political authority therefore has the duty of recognizing and promoting the true religion.” Contemporary integralists include Edmund Waldstein, O.Cist. (quoted here), Patrick J. Deneen (Notre Dame), Gladden Pappin (University of Dallas), and Adrian Vermeule (Harvard). The movement has been endorsed in the pages of First Things, Notre Dame’s Church Life Journal, and its online home is a website called The Josias.

But for all that recent exposition and publication, Catholic integralism is little different in substance from the enthusiastic expressions of Eusebius of Caesarea in the fourth century. Eusebius styled Constantine, the first Christian emperor of Rome, as “invested…with a semblance of heavenly sovereignty…and fram[ing] his earthly government according to the pattern of the divine original, feeling strength in its conformity to the monarchy of God.”

The aim of the Catholic integralist is the integration of religious authority and political power. And, if this seems like a strange idea in the 21st century, we should perhaps pause over that. Popes were crowned with triple tiaras to signify the unity of their heavenly and earthly authority as recently as Paul VI’s coronation in 1963, and Pope Francis remains a head of state today. Still less than a century ago, the popes made claims to the Papal States that challenged the legitimacy of the Italian national government. Like so much in the traditionalist imagination, these things have lingered into our time. It seems almost forgivable. A century is not very long in the lifetime of the church.

Still, there is something else. In 2018, Patrick J. Deneen wrote Why Liberalism Failed to explain…well, why he thinks liberalism failed. I should say that Deneen offers a poor account of what he means by “liberalism” in the book, and probably he doesn’t mean what you think he means. Deneen’s complaints certainly encompass the political positions of people like Elizabeth Warren or Joe Biden. Yet, if you are sensing that there are important differences between Warren and Biden, you’re beginning to see some of the problem.

Deneen is untroubled by that. He means liberalism in a larger sense, one that encompasses the whole project of modern philosophy and politics. For Deneen, the critique of liberalism is an argument with “A political philosophy conceived some 500 years ago, and put into effect at the birth of the United States nearly 250 years later.” In other words, Deneen’s argument with what he calls “liberalism” really is an argument with the separation of church and state, our whole way of life, and everything most readers probably assume is true about the world—such as, that the political presuppositions of American politics are good and true.

There is a different argument underway right now among conservatives. National Review‘s David French and Sohrab Ahmari of the New York Post have been embroiled in an argument on Twitter and, most recently, at The Catholic University of America, about whether conservatives should accept or reject the same presuppositions of American politics that Deneen wrote about.

Ahmari, who is Catholic, believes that Christians need to “fight the culture war with the aim of defeating the enemy,” while French, an evangelical, takes a more conventional approach to say that people deserve strong guarantees of personal freedom even if the use of those freedoms sometimes offends Christians: no one needs to be “defeated.” The stakes of this argument are the same as the stakes in Deneen’s book—whether believers still have enough confidence in what Deneen calls “liberalism” to defend it.

We should be candid enough to say that all this is happening for a reason. Our way of life has not stood up well in the decades since the end of the Cold War. At the level of ideas, the Cold War was a conflict about how the world would respond to industrialization and the end of feudalism. When Francis Fukuyama wrote his The End of History and the Last Man in 1992, he was asserting that the argument was over: our way of life had prevailed. But maybe it never was so simple.

What we have learned since 1992 is that Americans are no less susceptible to ugly, xenophobic nationalism than anybody else, and the American system has not been an effective way to channel our conflicts through a legitimizing political process where everyone accepts the outcomes. Liberalism, for everything that Deneen and the Catholic integralists mean by it, is in trouble.

The question is: What should we do?

One thing seems clear enough. Integralism is not the answer. This is not only true because the Jesus we find in the gospels made no effort to enact a political regime or to displace Rome. In fact, He said that He had no earthly kingdom (Jn. 18:36). But there is another reason too, and it has everything to do with how we think about politics.

The fundamental problem with integralism—from Eusebius to Ahmari—is that integralists are too uncomfortable with sin. I don’t mean that they should get comfortable with it. But I do mean that it is a dangerous mistake to expect that we can live without it, or that any government really can do anything to make sin less prevalent. In their own way, that was what the Leninsts believed. Our tradition tells us to have a different, more minimal expectation from politics.

Believers in general—Catholics specifically—can lead us out of this wilderness toward a better sort of “liberalism,” I think. We will have to begin with a different expectation of politics and a better grasp on what we believe.