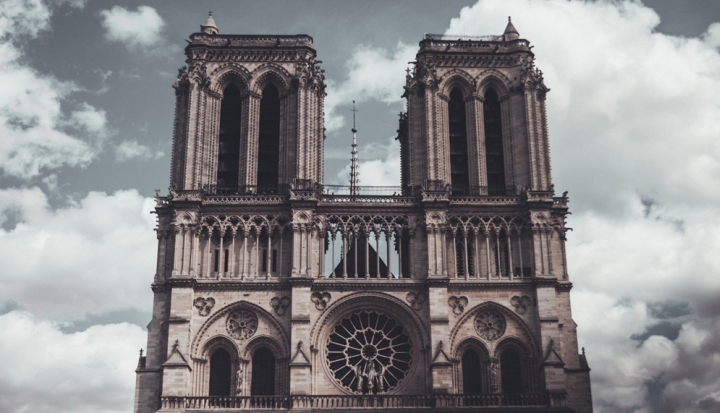 Where were you on April 15 when you first saw flames tear through the ancient wood roof of Notre-Dame de Paris Cathedral? What thoughts and emotions gripped you as plumes of smoke rose from that sacred space? And, equally relevant, how did you react days later when protesters hit the streets of Paris waving placards that read “1 Billion for Notre-Dame! Zero for the Homeless!”?

Myself, I watched in horror as Notre-Dame burned. I had attended Mass there. I had read of its history and listened in wonder to tour guides passionately recount all the cathedral had witnessed through the centuries. I had listened to great theologians like Thomas O’Meara liken its façade to Thomas Aquinas’ Summa Theologica. I had gazed in reverie at its sumptuously colored rose windows.

Then tragedy struck and fire threatened to destroy an irreplaceable religious and cultural treasure. People lined the streets along the Seine, gaping in disbelief as the fire ravaged the cathedral. Some knelt and prayed. Some broke into religious hymns. There were audible gasps when the spire collapsed and plunged into the church.

Courageous firefighters raced into the towers to battle the rampaging blaze. They selflessly risked their lives to save something they believed transcended mere wood, stone, and mortar. French President Emmanuel Macron cancelled his itinerary and quickly turned his attention to the burning cathedral. He asked for the generosity of people around the world to donate to the reconstruction project. He even boldly proclaimed that the ancient cathedral would be restored in five years. Funds came pouring in from France and elsewhere. More than a billion dollars was raised in one week.

Then we saw the protests. Protesters wearing yellow vests marched the streets with signs raised, seemingly criticizing the restoration efforts. However, upon closer inspection, the restoration of Notre-Dame wasn’t so much the issue. The issue was the disparity of wealth. French billionaires who quickly offered tremendous sums of money toward the restoration rubbed salt in the wounds of protesters who had been asking for economic and tax reform to middle-class and low-income workers since 2018. A new government incentive of increased tax breaks for donations to the restoration effort added to this frustration.

Also relevant in the protestor’s plea is the reality that the government of France owns Notre-Dame. In fact, the government owns numerous historic churches throughout France and is responsible for them. France’s Ministry of Culture financially supports work to maintain the structure of Notre-Dame. The scaffolding around the spire before it collapsed attested to the government’s financial investment in the building. However, given the age and size of the structure those funds from the government are not adequate for its complete restoration. Fundraising projects in France and elsewhere had been undertaken in recent years to help restore the building. What emerges then is a much more complex cultural and economic picture surrounding the Notre-Dame restoration project.

So we might ask, is it worth it? Could the money not be better spent to aid the needs of society’s most vulnerable? After all, there’s no shortage of large magnificent historical Catholic churches in Paris. Pope Francis himself from the outset of his papacy has envisioned a “poor church for the poor.” Whether it’s Notre-Dame or some other magnificent cathedral, is a multibillion-dollar renovation project keeping with that vision? Or is the church living beyond its means? Perhaps even more pointedly, is the church living in a consistent manner with Jesus’ vision set out in the gospels?

Jesus in the gospels always gives highest honor to God and the well-being of humanity, caring especially for those most in need. Rarely do we see him occupy religious buildings, and, as the cleansing of the temple would suggest, the buildings themselves were not of greatest priority. In the biblical post resurrection appearances, Jesus helps draw the early Christian community together around the “breaking of the bread” and the proclamation of the reign of God, but here again this could take place just as easily in a home on the road to Emmaus (Luke 24:13–35) or on the shore of the sea of Tiberias (John 21:1–14).

Stephen, in his impassioned speech before his martyrdom, reminds the religious leaders that God accompanied their ancestors in a tent and that “the Most High does not dwell in houses made with human hands” (Acts 7:48). The early Christian communities gathered in a variety of house churches. Although these communities were not perfect and had their struggles, as Paul’s letters indicate, one ideal sketched out in the Acts of the Apostles was of a community that prioritized proclaiming salvation through the resurrected Christ and sharing all things in common such that “there was not a needy person among them” (Acts 4:34).

Where are those biblical visions now? Where is this prioritization of God and the dignity and well-being of humanity? Tragically today, some parishes can be so financially burdened with building maintenance issues that any talk of missionary discipleship takes a backseat to endless fundraisers and second collection appeals. The building where the church gathers is not our faith. No doubt, this is very difficult to hear after centuries of inspiring human ingenuity and creativity that has labored to create meaningful spaces for worship. After the contributions of such luminaries as Bernard of Clairvaux, Filippo Brunelleschi, Abbot Suger, and Gian Lorenzo Bernini and the development of liturgical architectural styles ranging from Byzantine to modern, it’s difficult to hear what sounds like a deprioritization of church architecture. But what is of ultimate value?

As a work of art, as a monument of great historical significance, as a place of worship, Notre-Dame’s importance is almost impossible to measure. I greatly desire to see it restored. However, even more than this I desire a church so transformed by Jesus’ life and mission that there is no needy person among us. That profound witness would inspire greater justice in our world as a whole.

For Christians, people will always be more important that buildings. And yet great buildings like Notre-Dame remind us of our deeply held values, witness to our greatest aspirations, and lift our minds and hearts to God. So, in typical Catholic fashion, the answer is both/and. Work first and foremost for the dignity and well-being of all, especially those most in need, and work to restore sacred architecture that witnesses to faith and our deep-seated values. But people come first.

The greatest sacred buildings have always been built slowly. Construction on Antoni Gaudí’s unique architectural masterpiece, the Sagrada Familia, in Barcelona began in 1866. It is still unfinished. Restoration and preservation work on the older parts of the structure continue even as the building is being built. Every cathedral is a multigenerational undertaking. Prioritize “a poor church for the poor” and slow down the rebuilding efforts. Give architects and construction workers the chance to rebuild to their best ability at a reasonable pace, and give future generations the witness of a church rooted in Christ and for the poor.