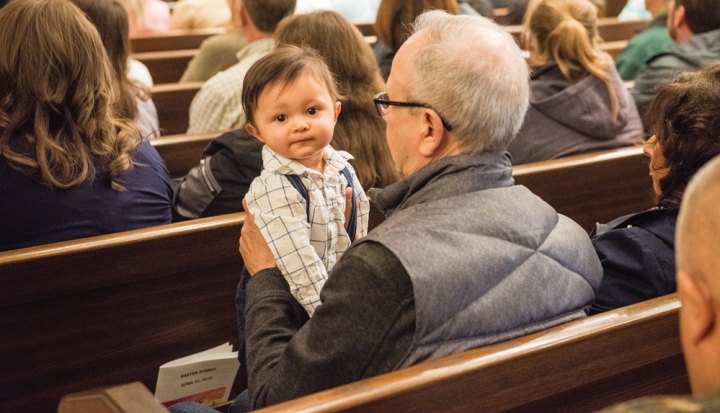 When I first started going to my parish about four years ago one of the things I was looking for, other than a schedule of Masses in English (I live in a predominantly Hispanic neighborhood in Upper Manhattan), was community—though I freely admit I hadn’t a clue what community meant. For me, as with so many 21st-century types, it was a fairly free-form concept, a vague desire (at times an ache) for some sense of connection, belonging, or relationship. Yet I also had the adult wherewithal to know that connection, belonging, and relationship, as core human desires, are inherently messy. The trick is to find the mess that’s the right fit, your holy mess.

I started volunteering for things at my parish: lector, eucharistic ministry, homeless outreach, the annual sidewalk sale. I started meeting fellow parishioners, learning what Mass they went to, and where they sat. I even started thinking maybe I was part of the community. Although I also wondered whether I really belonged or was just someone who volunteered a lot.

But then two of the things I volunteered for—being a catechist in the religious education program and making communion visits to the homebound—ended up back to back. On Saturday mornings I do catechesis with the parish’s third graders. Then I head over to church for noon Mass. Afterward I make my communion visits, among them to an 82-year-old former nun, a man with cancer and his mother in late-stage dementia, and a 93-year-old Irishwoman.

At first I wasn’t entirely sure about the arrangement. An hour and a half with a roomful of 8-year-olds is roughly equal to two aerobics classes, and by the end of it I’m often more than ready for a nap. I was afraid I might burn out (or worse: declare myself a martyr).

But God, per the assurances to St. Paul, works perfection in weakness, and instead of burning out I caught fire. The interplay of the two ministries utterly recalibrated my spiritual life and brought me into the parish community in ways I never could have asked for.

It’s fitting that the Mass serves as the bridge between the two ministries, since its structure—word and Eucharist—is present in both. As a catechist, one of my chief tasks is to bring the children into the presence and the power of the word. And they love scripture, love discussing it, love the miracles and parables, love trying to figure Jesus out, love slamming into mystery. (One of our early discussions on the Trinity took on the aspect of one of the rowdier sessions at the Council of Nicaea—except here the theologians were all 8-year-olds.)

When my kids read a gospel story, it’s still new to them, still fresh. For some, it’s the first time they’ve heard it. They rush and stumble from one verse to another, one event to the next. Everything, everyone, even and especially Jesus, is a little strange, even a little scary. In all the strangeness, details can get confused. One class during Advent, after we had said our opening prayer around the classroom altar, a girl remained there, staring at the crèche. I asked her what she was looking at, and, sharing the class’s obsession with King Herod, she pointed to the three kings and said, “Which one wanted to kill him?”

But even at their age scripture touches their lives in the place where they need God the most, just as it does with adults. When talking about St. Joseph I explained what a foster parent was, and a girl, the adoptee of a single mother, raised her hand and asked if adoptive parents loved their children as much as “regular” parents. When we read about the joyous reception the father gave to the prodigal son, a boy remarked, “Wow, I wish my dad was like that.” And then, looking down at the desk, he muttered to himself, “But then, I don’t even know my dad.” And when we talked about the apostles leaving everything to follow Christ, a number of kids in the class—mostly boys—had real difficulty with the idea of Jesus prompting men to abandon their families.

It’s times like these I remember that so much of catechesis is just setting the stage for grace to make its entrance. I was teaching my students how to open the word, but what they learned is how the word opens us.

Scripture is also an essential part of my communion visits—before Eucharist I read whatever the gospel is for the noon Mass—but the text for this group bears none of the strangeness that it does for my third graders. On the contrary, for them it’s an old friend, an abiding comfort.

As I read the gospel passage to my older parishioners, they grow very quiet. They sink into the text, wrap themselves in it, sometimes make little sounds of recognition and comfort at a particular word or phrase, at the familiar yet solemn lilt of biblical language. And somewhere in there, communion’s already begun.

I walk through the door with the week I’ve had, the morning I’ve had, and the person I’m visiting has their own situation as well. But as soon as I open the Bible, we’re huddled over it, a community of two, savoring the story we both know so well—the story that saved our lives.

Along with the primary focus on the word, one of my other tasks—and greater joys—as a catechist is to prepare children for first communion. I teach them about Moses and the first Passover. We study the structure of the Mass. And several times during the year we do a breaking of the bread.

We gather around a candle in front of our classroom altar, and I tell them what happened at the Last Supper, how Jesus took the bread, broke it, gave it to the disciples, what he said. And I break the bread—a loaf of Italian I’ve picked up at the grocery store—and pass it around. They each take a piece, eat it, and—a miracle for this age group—fall silent. I’ve come to call it the silence of Christ. The first time we did it, a boy leaned over to me in the silence (the boy who doesn’t know his dad) and whispered, “Jesus is here.”

For my third graders, the Eucharist is still playacting, rehearsal, but for my homebound parishioners it’s the only reality there is. The silence of Christ is already deep within them. It’s the silence beneath the din of isolation and worry; beneath the clatter of a world on TV they no longer understand; beneath doctor appointments, insurance companies, medications, and the nagging mewl of whatever part of their body or their life hurts most that week; beneath the low thrumming of the passage of time.

Immediately after receiving, Mary, my Irish friend, lowers her head, shuts her eyes, and offers her post-communion prayer in the reverent mutter of one utterly given over to God. When I first heard it, I recognized the rhythm of a prayer I’d learned in grade school and probably hadn’t thought of since: a prayer to Christ crucified. Random phrases briefly break the surface of her whispered brogue—“lively sentiments of faith, hope, and charity . . . tender pity thy five wounds.” Her voice always rises for the final line: “They have pierced my hands and feet; they have numbered all my bones.”

From there she segues directly to a Hail Mary, in which I join her. Finished, we make the sign of the cross and clasp hands as our kiss of peace. We sit there for a moment, hands still joined, silent. Then she says, “The kettle’s on,” and she goes to get the tea and soda bread.

And somewhere in Mary’s post-communion prayer my whole Catholic life rattles—but not with sentimentality. With mystery. The mystery of my tiny speck of history, my given chunk of years somehow connected to the 2,000-year unfolding of God’s presence in the world as Christ. My paltry string of heartbeats, from childhood to old age, is somehow attuned, somehow one with the eternal pulse of the living God. And with everyone else. My third graders, my old people, the parish community—we’re all in the mystery together: all standing at the cross, all gaping at the tomb, all breaking bread and praying, all confessing, all martyred, all holy.

All joyous. I came to the parish looking for community. But I found the communion of saints.