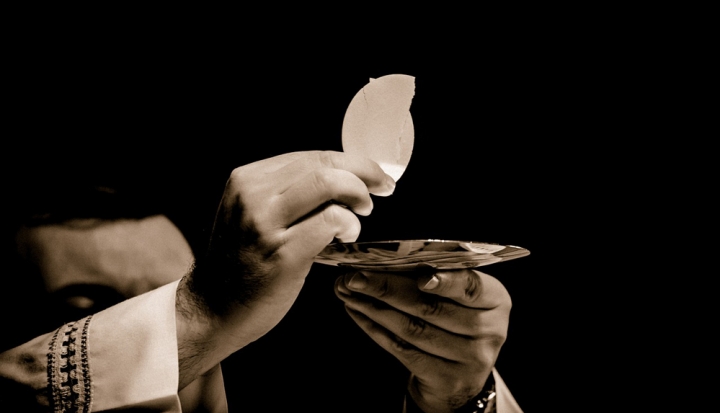 “The Body of Christ . . .” In early September of 2012, Cardinal Donald Wuerl looked pointedly at me as he offered holy communion on the high altar of the Shrine of the Immaculate Conception. It was the inaugural Mass for The Catholic University of America’s new academic year and I was on the altar as acting dean for the school of social work along with other university officials. Yet, my bishop’s gauging look was for a different reason, I believe. Because, ahead of the Democratic Convention that summer I had joined the reelection campaign of President Obama and been named one of the national co-chairs of Catholics for Obama. Conservative Catholic activists at the time were insisting that Catholics working for Obama—Catholics like me—should be denied communion and some bishops agreed.

That moment on the altar remains a poignant memory; one that resurfaced Thursday with the announcement by Attorney General William Barr that the Trump administration would reverse an Obama era moratorium and resume executions by the federal government. Should Barr, a prominent Catholic, now be denied communion?

Church teachings are clear on the death penalty. Pope St. John Paul II wrote in Evangelium Vitae (The Gospel of Life) that “Not even a murderer loses his personal dignity, and God himself pledges to guarantee this.” Pope Francis affirmed his predecessor in 2017, saying “no matter how serious the crime that has been committed, the death penalty is inadmissible because it is an attack on the inviolability and the dignity of the person.”

Last summer these teachings were codified in Section 2267 of the Catechism of the Catholic Church. Barr, in ordering the executions, is—with clear intent and knowledge—acting and advancing a policy of government that is contrary to the catechism. His actions in this matter, thus, are more serious than simply voting for a candidate whose policies are contrary to church teachings, more serious than merely serving in an administration with policies contrary to the church’s, and more serious even than a Catholic legislator voting to provide funding for evil policies.

Barr’s actions are purposeful and direct. In the language of canon law, Barr is “formally” and “explicitly” cooperating in grave actions that the catechism forbids.

Every law and policy, no matter how momentous or trivial, has moral consequences that we are obliged to weigh in light of the Gospels.

One wonders how the conservative Catholic punditry that was so strident in calling for denial of communion to John Kerry, Kathleen Sibelius, Nancy Pelosi, or Joe Biden in past years now will justify its current silence in light of the attorney general’s current active opposition to our church’s teachings. Perhaps some pundits will recant. They should.

For my part, I’m grateful that my bishop did not withhold the body of Christ on that altar in 2012. Then as now, I am utterly opposed to any who would weaponize the sacraments to score ad hominem points in the divisive politics that plagues our nation.

And, while I utterly oppose Attorney General Barr for his role in the executions ordered by the Trump Administration and will lift up the church’s teaching on the death penalty at every chance, I urge my fellow American Catholics on all sides in public life to forego any new rounds of the Communion Wars. Regarding the sacraments, we are wrong to judge and wrong to politicize.

Catholics in public life should indeed bring their faith to bear when addressing the laws and policies of the political order. Every law and policy, no matter how momentous or trivial, has moral consequences that we are obliged to weigh in light of the Gospels. It is not only appropriate but required that we are guided by the church’s teachings in assessing the Trump administration’s decision to reinstate the death penalty.

And, by those teachings, we must call out the immorality of those executions. As faithful, Catholic citizens we are obliged to make moral judgments about policies and laws. But regarding the personal receipt of sacraments and similar matters of another’s conscience, there is no place for public demonstrations or judgment. New Communion Wars are unacceptable.