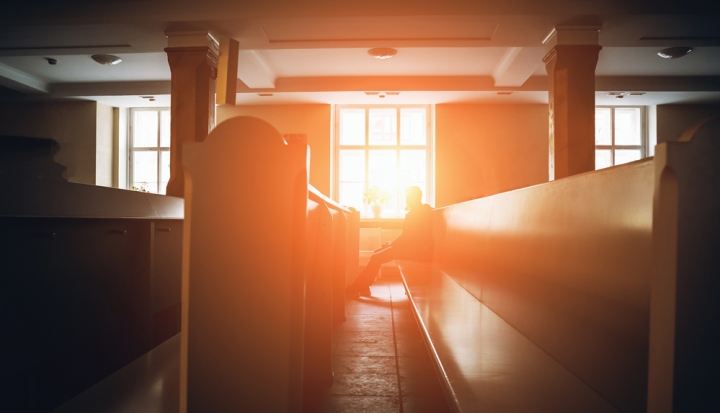 Over the past several years, and again in recent months, I have found myself in church sanctuaries and academic auditoriums engaging in various events discussing the clergy abuse crisis in the church. I go because I believe any opportunity for openness, listening, and reconciliation is a sign of hope. And, whether the gathering is labeled a listening session, forum, reconciliation service, or healing circle, each provides a space for greater understanding and communal lamentation.

Almost always I find myself frustrated by a recurring theme or variation on that theme. The organizers of the event will in some way pray for, or encourage prayer for, the “victims of abuse and their families.” This call to prayer assumes two things that, in my experience, are false or at least not entirely true. First, such an invitation assumes that those who have been sexually abused by clergy, religious, or lay ministers remain victims and have not trudged along the difficult path toward becoming survivors. There is indeed a difference.

Second, by speaking of survivors of abuse, there always seems to be an underlying assumption that those survivors have all left the church entirely. Thus, the community is called upon to pray for them as they would anyone outside of itself.

On one such occasion, as the community was praying for victims of abuse, I looked around the room. In addition to me, I counted several other men and women who are survivors of various forms of sexual violence by priests as children and adults and who remain active in the church. Indeed, each of us was a recognized leader of some sort, formed for ministry and actively engaged in that ministry.

Most people in the room didn’t know that I am a survivor myself, nor do they know the stories of the other men and women who are survivors and are active members of the large suburban parish we call home. The ongoing revelations related to the horrific scope of abuse in the United States suggest that there were many more survivors in our midst that night and even more who are part of our parish community.

In the mid-1980s my family moved to a small bedroom community outside of Madison, Wisconsin. I was 9, in the fourth grade. Our house was within walking distance of our Catholic parish, where I served as an altar server and where I attended religious education classes. Because of the small size of the congregation, I was one of only a few acolytes, so I served Mass regularly and was often called on to help with funerals and weddings on weekends and during the summer. I was taller and heavier than most of my classmates and was older in appearance—physically and in my overall demeanor.

I also believed that God was calling me to be a priest. I was eager to impress the adults around the church in the hopes that they would also see such a future in me. I yearned for attention and acceptance. I received both, it seemed, from the pastor, who over the course of a year sexually abused me multiple times.

“This is what priests do,” Father often said as the abuse was taking place. “And we never tell others about what happens here in the rectory,” was what usually followed.

For many years I didn’t tell anyone, keeping what seemed like a promise. Gratefully, our family moved in December of 1986, and I never saw the priest again. He died in 2008.

Last fall I visited friends at a Benedictine monastery located less than a mile from the church and the house where my family lived. I had been to the monastery before, making personal retreats there over the years. However, I never drove around the old neighborhood until I did so in October. As I turned onto the country road that serves as the main entry into Westport, my body began to tense. As I pulled into the parking lot of St. Mary of the Lake, my stomach started to turn.

Survivors of childhood sexual trauma often doubt their memories, no matter how vivid or how often they occur. But there before me was the confirmation I seemed to lack. The church was just as I recalled, the rectory in the same place, the exterior doors that led from the church and school to the back pathway to the rectory were just as I remembered. I began to sob.

I drove the path I would have walked repeatedly to get from home to the church. And as I drove by the house, I parked. There was the front lawn as I remembered it, where I would play during summer afternoons and where Father would drive by and stop and talk to me. On more than one occasion I got in the car with him. The lawn, the house, the street were just as it has played out in my nightmares for decades.

I understand why it is easier for Catholics to hold an underlying belief that all survivors have left the church. After all, believing that so many of us have stayed presents many challenges and many fears. What would you say if you knew? How would you handle being faced with the reality that what we are talking about, what we are praying about, is not just something that happened in the past but is a lived reality sitting next to you in the pew on Sunday morning?

I’m 42 now, more than 30 years removed from the trauma I experienced. I’ve had the opportunity to address what happened with many professionals, close friends, and fellow survivors.

What happened ruined me. It has affected every aspect of my life, and the fallout from the memories and the PTSD symptoms I have experienced and continue to experience are life-threatening.

So I get why my brothers and sisters in the faith are hesitant to believe I’m still here.

But I am. And here’s why. When in the ninth grade I began experiencing severe clinical depression and my near-daily experience of suicidal ideation started, it was my faith that kept me going. It was through prayer, through song, through gathering at the table that I found the strength to carry on.

And that same experience of faith has been what I continue to return to. It has been the balm I’ve so often needed, a life-saving, life-giving one.

So, church, it is essential for you to know that so many of my fellow travelers and I are still in your midst. We gather with you on Sundays for the Eucharist, you see us at the ambo lectoring and behind the altar presiding. We serve as lay ecclesial ministers on the staff of your parish, and we are among the religious sisters you see at retreat houses and in the community. We’re still here, we welcome your prayers, and we yearn for you to know us and our stories.

For those reading this who are fellow survivors, now is the time. Now is the moment to tell your story, to reach out and find support, to begin to live fuller lives amid a loving community. I know it’s scary. Just one step, no matter how small, will help move all of us forward toward hope and healing.

Eric S. Fought is a lay pastoral minister, preacher, and public theologian. He earned a Master of Divinity degree from Saint John’s School of Theology and Seminary in Collegeville, Minnesota and is currently in studies in the Doctor of Ministry in Preaching program at Aquinas Institute of Theology in St. Louis. He lives in Minneapolis.