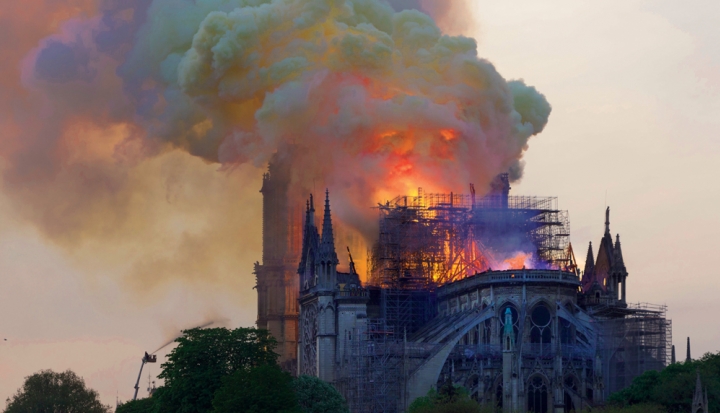 I was standing in my kitchen when I learned Notre-Dame de Paris was on fire. A friend had posted about the fire on Facebook before I even heard about it on the news. I tapped into a live video.

Watching the billowing smoke and flames, then the roof and tower collapsing, I was filled with a heaviness and a sorrow that was all too familiar.

“The church is on fire,” I texted to my friend. “And I don’t mean Notre-Dame.”

Watching the fire rage, I noted my own shock. It had never occurred to me that the most famous cathedral in the world could catch fire, could be so unprotected and vulnerable. It didn’t occur to me that a cathedral that took 200 years to build could burn down in an evening. But watching the fire stirred within me the reacknowledgment of an even more horrific tragedy.

As shocked as I was by the cathedral fire, I had been even more shocked in 2002 when I learned about the history of so many priests destroying the lives of so many children while bishops looked the other way.

The U.S. Conference of Catholic Bishops published a report in 2004 that said more than 4,000 U.S. priests had faced sexual abuse allegations over the previous 50 years in cases involving more than 10,000 children. A 2009 report by the Commission to Inquire into Child Abuse found that sexual abuse was “endemic” in Catholic-run industrial schools and orphanages in Ireland for most of the past 100 years. According to the BBC, a five-year inquiry in 2017 found that “tens of thousands of children” were sexually abused in Australian institutions over decades, including churches, schools, and clubs. Reports continue to surface.

I am tired of being surprised by the latest disaster in the Catholic Church.

The parallel between the fire at Notre-Dame and the situation of the Catholic Church itself is the parable for our time. We begin with the deep sorrow of a community that understands that loss affects us all—the loss of the cathedral was a global loss, not a Parisian loss. In the same way, every child’s abuse is the exploitation of someone in our own family.

We mourn for that which can never be replaced. The wooden beams that burned; the statues of Sts. Denis and Geneviève, patrons of France; the structure of the church itself—they are gone. There are plans to rebuild. There is hope for a future cathedral. Yet even amid the hope, there is an understanding of the irretrievable loss. And those children who were abused, the trust betrayed, the innocence shattered, the lives lost to suicide—irretrievable.

There is no way to build back innocence once it has been charred beyond recognition.

Fixing and rebuilding Notre-Dame will be a project judged by future generations. An aspect of the rebuilding process will be choosing carefully what measures to put in place so that the cathedral is never at such risk again.

We are in our infancy in terms of a proper response to the institutional sins of our church. We must admit that there are many members of our community who have fled in fear. Many more stand poised, considering whether to stay or go, not sure if they are welcome. It is now our responsibility to value every community member as a priceless treasure. We need to embrace new ideas for how to rebuild the church.

We cannot allow the fire to consume us.