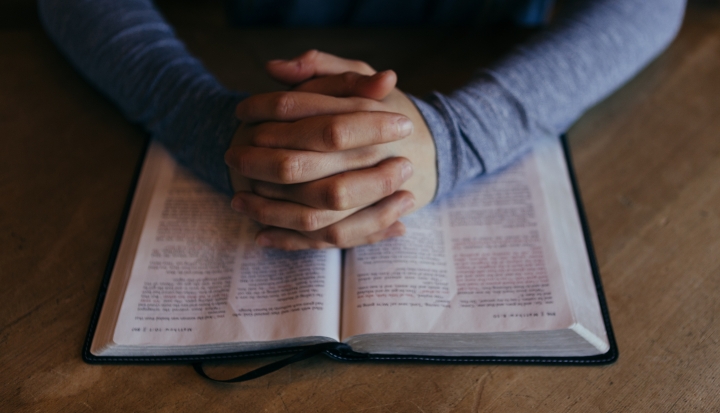 In 2018 Pew estimated that 50 million Catholic adults live in the United States. That’s a lot of Catholics—and we don’t all practice our faith the same way. From daily Mass to meditation and yoga, there are many ways to pray. U.S. Catholic surveyed readers to find out how they connect with God.

Of the 357 people who took our survey, 94 percent pray every day. Fifty-nine percent prefer to pray alone, while 25 percent like to pray with their church community, and only 15 percent enjoy prayer with family or friends. Almost half of the survey takers, 48 percent, say they pray most in their own home. Only 21 percent favor prayer at church, and 11 percent connect most with God when they are outdoors.

“I pray mostly at night,” says Mary Lou White of Georgetown, Kentucky. “That is when I am most focused—after everyone has gone to bed.” Geri Mclaughlin of West Lafayette, Indiana says she feels “closest to God when in community with others.”

Many U.S. Catholic readers say they struggle to pray in places that are noisy. David Santos of Denville, New Jersey says, “I find it hard to pray when there is a lot of noise around me. I would rather pray in solitude.” Likewise, Beverly Eskel from Methuen, Massachusetts prays in quiet. “I’m old,” she says. “I have the luxury of having solitude in my own home and time to pray. Every morning, as I put my feet on the floor, I thank God for another day and the grace not to screw it up.”

Although only one fourth of readers prefer praying during Mass, 74 percent attend service weekly. Seventeen percent attend daily, while only 9 percent find themselves in the pews fewer than once per month. “I usually find it hard to pray when there are a lot of people around,” says Morehead City, North Carolina resident Lynn Brugnolotti. “The exception is when I attend Mass.” In line with Brugnolotti, Christine Shannon of Danville, Illinois says, “Mass is by far my favorite form of prayer. When it has been convenient I have loved to attend daily Mass and did so for many years.” But schedules make it harder at some stages of life, she says. Tom Rinkoski of Minneapolis agrees with Shannon on the benefits of praying in community. He says, “I am an extrovert, so I like discussing spirituality, prayer, and scripture with folks the most.”

Rinkoski’s love of scripture is common. Eighty-nine percent of survey takers engage with scripture outside of Mass, but only 28 percent are a part of a Bible study group. However, 88 percent do not shy away from a faith discussion, saying they openly talk about their beliefs with others. Judith Stafford of Morehead, Kentucky says, “I am part of a discussion group at my church, and we read different books that deal with faith.” For her, being able to meet with the group is a special form of prayer. Fiona Martingale from South Beach, Florida also connects most with God when she is with others. “When I can talk about my faith and connect with people on theirs—especially those who have a different faith than I do, I feel most connected to God,” she says.

U.S. Catholic readers across the board say they are interested in the spiritual practices of other faiths. Eighty-one percent would like to learn more, and 52 percent have participated in a faith practice of a different religion. “When I engage in intentional spiritual practices I feel more centered and at peace,” says Lynne Miller from Oakland, California, who enjoys partaking in the Eastern spiritual practice of yoga. Similarly, Andrew Peterson from Chicago says, “Yoga allows me to center myself. I practice centering prayer as well, but I find myself feeling most grounded and close to God when I can unite my body with my prayer.”

U.S. Catholic readers also express difficulty finding the time to pray. Bob Slobig of River Forest, Illinois says, “I sometimes resist prayer, particularly when I am tired. But I still get a sense that may be when I need it most.” Sally Nehr from Poquoson, Virginia sees her fellow Catholics losing the desire to pray and says that it worries her. Laura Mack from Rome, New York admits to having her own struggles. “My prayer life goes through peaks and valleys,” she says. “I try to fully appreciate the moments when I’m feeling close to God and work through the moments when I feel that I’m further away from him. Prayer is a part of my everyday life, and I pray in various ways throughout my day.”

Despite a lag in formal prayer, however, survey respondents say they connect with God even in the mundanity of everyday life. Patrick Driscoll from Chicago says, “I stopped prayers of petition a long time ago. For me praying is seeing or trying to see others as part of Christ.” Activities such as reading, walking, and even engaging in discussion with others are common ways U.S. Catholic readers pray. Amy Jones of Grand Rapids, Michigan says, “I find God in the smallest, most insignificant portions of my day. In particular, I pray as I fold laundry, cook for my family, and even vacuum the rug.”

Respondents express a deep desire to dedicate themselves to prayer life outside of Sunday Mass. “I have always admired the faiths, such as Islam, Judaism, and Buddhism, that have not abandoned daily prayer throughout the day. They set personal prayer practices and participate in faith practices in the home, not just in their respective houses of worship,” says Donna Frithsen of Marlton, New Jersey. “My faith and relationship to God are more than simply attending Mass. Participation in the church is but one aspect of a faith commitment. I feel the call to take the lead of other faiths and better integrate prayer into my life.” Karen Kam of Plymouth, Minnesota says she has been working to improve her prayer life. “Making prayer a daily habit and a priority has improved my faith,” she says. “I pray right when I wake up and feel closest to God when I participate in the Eucharistic Adoration.”

Across the board, U.S. Catholic readers express the importance of prayer in their lives. Whether working to strengthen their faith or exploring nontraditional spiritual practices, Catholics are looking for ways to connect with God. Joseph Tomei from Santiago, Chile echoes the thoughts of many survey respondents. “Prayer is my life,” he says. “I do not know where I would be today nor what I would do without prayer. It is what sustains me and motivates me. It is what gives me life.”

A reflection for the seventeenth Sunday in Ordinary Time