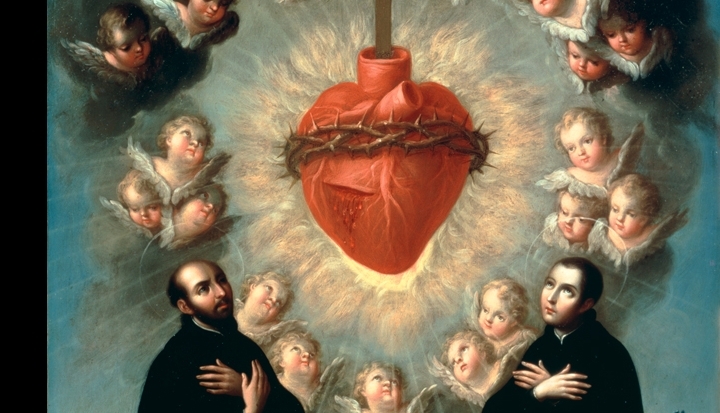 Across time and cultures the heart has symbolized a variety of traits: love, awareness, the will, along with numerous other prime movers of humanity. From Cro-Magnon Man to the Aztecs, the Egyptians, Chinese medicine, Judaism, and Islam; from Eros aiming his arrow at Psyche’s heart to Valentine’s Day cards, heart tattoos, and the endless trove of pop songs about hearts in various stages of being won, lost, or broken, so overarching is the symbol’s power that it seems to spring from something existential and primal.

In utero our mother’s heartbeat is the white noise of our existence, the ever-present thrum of life and love. The memory of that heartbeat carries us through life, and its echo informs all our relationships: to friends, loved ones, and God. It’s what inspires prayer to the Sacred Heart of Jesus, but here the memory and the echo go deeper to the very source of life and love itself.

Many believe that devotion to the Sacred Heart originated with the mystical visions of St. Margaret Mary Alacoque in the 17th century. However, the practice has its roots in the third century, when it was common for Christians to pause at 3 in the afternoon and meditate on the Five Wounds, particularly the piercing of Jesus’ side.

This meditation, in turn, has theological roots in the story of Doubting Thomas in the Gospel of John. Thomas, disbelieving his fellow disciples’ account of the risen Lord, finally places his finger in the mark of the nail on Jesus’ side. He experiences not only the cosmic shift implied by the resurrection, the unsettling sense that reality has been radically reconstituted, but also encounters the power of the living God, of a love stronger even than death. It is this awe-filled encounter with mystery early Christians commemorated.

The Gospel of John also directly impacted the development of devotion to the Sacred Heart. In John’s account of the crucifixion, he reports that blood and water flowed from Jesus’ side when, already dead, he was lanced by a Roman soldier. Early Christian exegetics was quick to parse the significance of this detail. St. Irenaeus (c. 130–202) is the first to associate the flow of water with the outpouring of the Holy Spirit and, by extension, the birth of the church.

St. Augustine, picking up St. John Chrysostom’s reading of the water and blood as symbolic of baptism and the Eucharist, conflates this story with St. Paul’s typing of Jesus as the New Adam: “Adam sleeps, that Eve may be born; Christ dies, that the Church may be born. When Adam sleeps, Eve is formed from his side; when Christ is dead, the spear pierces His side that the sacraments may flow forth whereby the Church is formed.”

Augustine also found significance in the detail from John’s account of the Last Supper, when he describes “the disciple whom Jesus loved” (long identified as John himself) laying his head on Jesus’ breast during the meal. Proximity to the Lord’s heart was said to have infused John with the Holy Spirit, as evidenced in the transcendent wisdom of his gospel. Reclining on the heart of Jesus later emerged as an important feature of the devotion.

One of the chief hallmarks of the religious revival of the 11th and 12th centuries was the widespread increase of private devotion marked by fervid personal piety with a strong focus on a devotee’s emotional response to the events of Christ’s life, particularly to his passion. It was during this period that the Sacred Heart came to be venerated not only as the birthplace of the church but also as the source of love—a love that surpasses human suffering. By the early Middle Ages, St. Anselm of Canterbury writes in one of his meditations: “Sweet in the opening of His Side; for indeed that opened Side has revealed to us the treasures of His goodness, His Heart and His Heart’s love for us.”

The revival of personal piety also saw the second great wave of monasticism, and devotion to the Sacred Heart took firm root in Benedictine and Cistercian monasteries, in the latter particularly promoted by St. Bernard of Clairvaux.

However, it was with the Franciscans that the devotion truly became a staple of popular piety. St. Francis, whose conversion experience occurred while meditating on a crucifix, had a great dedication to the passion of Christ. This dedication was so intensely sustained throughout his life and ministry that he was graced with the stigmata two years before his death.

With the Franciscans the devotion evolved from mere adoration of the Sacred Heart to actual union with it. St. Bonaventure writes, “The heart I have found is the heart of my King and Lord, of my Brother and Friend, the most loving Jesus . . . I say without hesitation that His heart is also mine. Since Christ is my head, how could that which belongs to my head not also belong to me? . . . Oh, what a blessed lot is mine to have one heart with Jesus!”

St. Gertrude (the only female saint with the honorific “the Great”), a 13th century Benedictine mystic, not only experienced the union of hearts with Christ, as well as stigmata, but was among the first visionaries to actually see and be drawn into contact with the Sacred Heart of Jesus. St. Gertrude’s first visions of Christ began in 1281 when she was 25, continuing throughout her life. It was in one that occurred on December 27 (the Feast of St. John the Apostle) that she was first shown the Sacred Heart.

St. John himself was present in the vision and bid Gertrude to approach Jesus and, as he had done at the Last Supper, lay her head against Jesus’ breast, where she actually heard the pulsations of his heart. Astonished at the spiritual intensity of the experience, she asked St. John why he had said nothing of it in his writings. His reply: “It was my task to present to the first age of the Church the doctrine of the Word made flesh, which no human intellect can ever fully comprehend. The eloquence of that sweet beating of His Heart is reserved for the last age, in order that a world grown cold and torpid may be set on fire with the love of God.”

By the time of St. Gertrude’s death in 1301 the devotion was widespread among Catholic laypeople, with here and there some local church recognition. However, it was with St. Margaret Mary over 350 years later that it would assume the form familiar today and which would ultimately be recognized by Rome.

St. Margaret Mary’s first vision of the Sacred Heart also occurred on the Feast of St. John, though St. John was not part of the vision. Jesus himself invited her to lay her head against his heart and, uniting her heart with his, drew her into the infinite depths of divine love. “Behold this Heart,” he said, “which has so loved men that it has spared nothing, even to exhausting and consuming itself, in order to testify its love.”

Then, as St. John had explained to St. Gertrude, Christ told St. Margaret Mary that this love was being revealed now because humanity’s love for God had grown so tepid. What differentiated her visions from those of others was that Jesus had a specific mission for her: She was to spread devotion to the Sacred Heart throughout the church and, as subsequent visions revealed, in a specific form. There was to be a holy hour of eucharistic adoration on Thursday night, reception of the Eucharist on the first Friday of every month, and a feast established in honor of the Sacred Heart.

Local theologians and members of St. Margaret Mary’s own religious community, the Sisters of the Visitation, at first regarded these visions with skepticism. However, she eventually won the support of St. Claude de la Colombière and, via him, the Jesuits, leading to the gradual acceptance of the visions’ validity.

Four years before the saint’s death, her community began observing the Feast of the Sacred Heart privately; within a few years it was a mainstay of Visitandine convents throughout Europe. Local recognition established itself parish by parish, diocese by diocese until, 75 years after St. Margaret Mary’s death, the feast received papal approval for an entire country: Poland. In 1856 Pope Pius IX established the Feast of the Sacred Heart as obligatory for the worldwide church.

If St. John thought that the fervor of 13th-century Catholics had grown tepid, one can only imagine what he would make of ours. With less than 4 out of 10 Catholics attending weekly Mass, a healthy devotional life is unsustainable. Devotion to the Sacred Heart has largely fallen the way of other traditional Catholic practices once the stuff and substance of parish life. (Though not everywhere: My own parish has a Sacred Heart group, eucharistic adoration at least once a week, and any number of opportunities to pray a group rosary.)

Perhaps it’s time to reconsider a devotion that, over the years, has moved from awe of a God revealed through suffering to veneration of a wounded love to mystic union with the very source of love itself.

Here in the 21st century, mystic union with the Heart of Jesus may, for the average Catholic, seem ambitious. But we forget that when Christianity first emerged it was considered by the Romans to be one of the mystery cults from the East, primarily because its adherents claimed to experience union with their God.

The Romans were right: While no longer a mere cult, we are a mystery religion, and we do experience union with our God—every time we participate in the eucharist. And devotion to the Sacred Heart of Jesus is intrinsically eucharistic. What we’re seeking in union with the heart of Christ is the same thing we’re seeking when we gather at the eucharistic table, where the words “This is my body” become the very heartbeat of God.