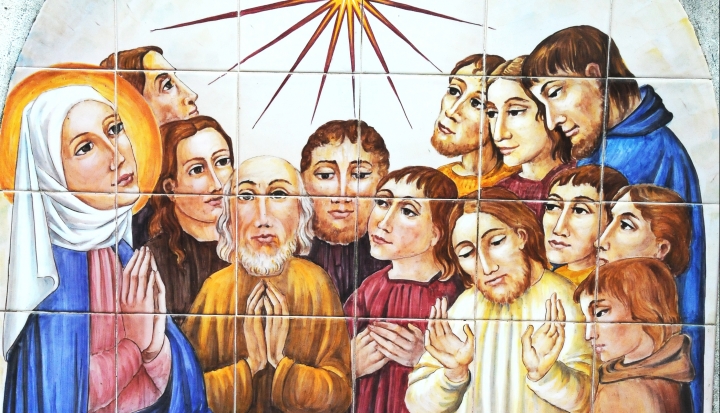 Heirloom wedding rings are powerful markers of personal heritage. Having one is a reminder of the family member with whom it originated (even if we never knew them) and the person(s) through whom it has passed. But for its original owner, it was not an heirloom at all but rather a symbol of their marriage covenant with a particular person. Only as that ring becomes an heirloom, passed on from person to person, does its meaning shift. No longer just a wedding ring, it increasingly becomes a symbol of ever widening family connections.

Pentecost is like an heirloom wedding ring inherited from the past and transformed. Pentecost had a lengthy history before appearing in Acts of the Apostles, Chapter 2. Known in Hebrew as Shavuot (the Feast of Weeks), it originated as the wheat harvest festival (see Exod. 34:22), occurring seven weeks after the barley harvest festival, Pesach (Passover). Jewish faithful from across the ancient world journeyed to Jerusalem to offer the first harvested wheat sheaves at the Temple.

Additionally, by the time of Jesus, Shavuot became the occasion for celebrating God giving the Torah—the Law—to Israel through Moses. God’s Pesach salvation of Israel and their passage through the Red Sea was solidified through the Law: Israel experienced how God would be their God and understood how to be God’s people.

One of the optional readings for the current Pentecost Vigil, Exodus 19:3–8a, 16–20b, tells the story of God’s post-Pesach Torah gift. God descended upon Mount Sinai in fire and smoke. Similarly, in the Acts Pentecost narrative the Holy Spirit descends upon the disciples in tongues of fire. God speaks with Moses, who emerges with the Commandments. The disciples emerge from their encounter with the Holy Spirit as the church, the community of the resurrection, speaking the gospel of Jesus Christ to others. Shavuot-Pentecost is a theological heirloom wedding ring, communicating the same fundamental truth about God’s desire for communion with people.

But the Acts Pentecost narrative extends beyond Shavuot. It incorporates the story of the Tower of Babel (Gen. 11:1–9), where God caused new languages to be spoken in order to frustrate humanity’s self-centered pride. No longer able to understand each other, people spread throughout the world. In the church, 50 days after Easter, Babel is not undone—Babel is transformed. Linguistic division remains, but the Holy Spirit enables the church to transcend divisions: Each person there heard the church “speaking in his own language” (Acts 2:6), much like a speech delivered and simultaneously translated at the United Nations.

Since Pentecost, the church has preached the gospel in many and varied ways. Understanding the fullness of the gospel thus requires engaging with the different languages, customs, times, and places in which it has been preached—that is, in the very ways in which that heirloom has been received.