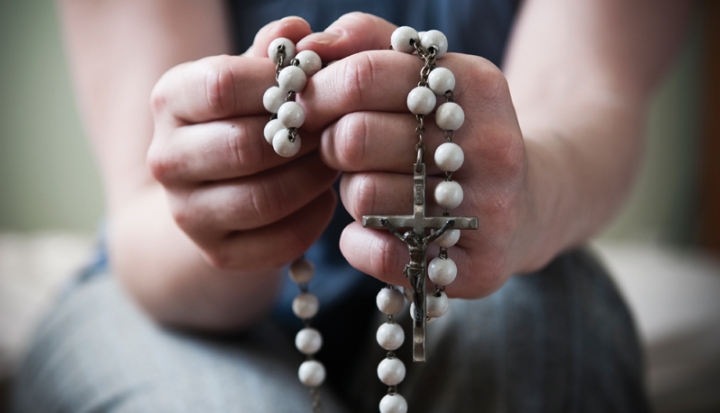 I could hardly believe it when I found myself reciting the Hail Mary as I was quickly wheeled into the operating room for an emergency C-section this past January. While the predominant emotions of the final moments leading up to my daughter’s birth were fear (“Will my baby be OK?”) and disappointment (“This isn’t going as I hoped it would.”), I also remember surprise that this particular prayer surfaced to my consciousness. Before the surgery, it had been years since I had prayed to Mary. While I’m not opposed to Marian devotion, it’s not my personal spiritual style any more than Doc Martens are my first choice of footwear. In the moment of becoming a mother, though, praying to Mary seemed right, and even as it surprised me, it comforted me.

Thanks to having memorized the Hail Mary, praying to Mary came naturally in my moment of need despite my ordinary distance from her. I’m one of millions of Catholics for whom Marian devotion is not an ordinary aspect of their spiritual life and yet who could recite a Hail Mary at the drop of a hat. Whether thanks to Catholic school, religious education based on the Baltimore Catechism, or nighttime family prayers, this staple of Catholic prayer life is ingrained in our minds like the Pledge of Allegiance.

The practice of learning and reciting prayers written by others has a long history. From an early age, Jesus would have learned rote prayers recited in the synagogue. One of the cornerstone prayers of our faith—the Lord’s Prayer—came from Jesus himself. St. Paul extolled the first Christians to hold fast to the teachings passed on to them, which would presumably have included the prayer Jesus taught us, and many of the church fathers attested to the common use of prayers like the sign of the cross and the Lord’s Prayer. Around 200 C.E. Tertullian wrote, “In all our travels and movements, in all our coming in and going out, in putting on our shoes, at the bath, at the table, in lighting our candles, in lying down, in sitting down, whatever employment occupies us, we mark our foreheads with the sign of the cross,” and by the early fifth century, Sts. Ambrose, Augustine, and Jerome had all written about the use of the Lord’s Prayer in the Mass.

Today the church continues to pass down these basic prayers (and ones developed later, such as the Hail Mary and the Act of Contrition), teaching that the memorization of prayers is an essential support to an active spiritual life. However, following broader trends in U.S. education, the practice of memorization in religious education has fallen out of pedagogical favor.

In my work as a director of faith formation, I teach my parish’s confirmation program, and many of my students admit to not knowing the basic prayers of our tradition. To be sure, they learned and knew the prayers at one point. Our parish’s devoted second-grade catechist of over a dozen years gives each of her young pupils an “I Know My Prayers” card, and by the time they receive their first Eucharist, they have all proudly recited and received stickers for the Lord’s Prayer, Glory Be, and Hail Mary. But for many of our students their enrollment in our faith formation program is their one connection to the church, and without reinforcement at home or attending Mass the prayers slip through their memories like the capital of Bangladesh did from mine years ago.

From time to time I’ve wondered if I should train catechists to place a greater emphasis on the memorization of prayers during their weekly faith formation classes in order to ingrain the words more deeply in our students’ minds. At the same time I’ve also wondered if a portion of each class should be devoted to completing a service project, reading the Sunday’s gospel, or exploring different types of prayer. The fact is there is only so much time in a religious education program year (23 hours in ours, to be exact; our program is fairly typical in that it runs from the end of September through early May and doesn’t convene over holiday or school vacation weekends). Any time committed to one worthy learning objective is time taken from another, and I happen to believe that learning about the parables of Jesus, the corporal and spiritual works of mercy, the communion of saints, and Catholic social teaching is as important as memorizing prayers.

Besides the fact that classroom time is in short supply while material of importance abounds, I’ve never been sure whether promoting the memorization of prayers conveys the message I want to send. If our Sunday morning classes are the one place many of our students are exposed to conversation about faith and God, we have to be very careful with what we tell them about faith and God. If nothing else, I want our kids to know that God loves them no matter what, that they are valuable human beings no matter what, and that their faith will be there for them no matter what. I don’t think memorizing prayers contributes to this knowledge.

Or rather, I didn’t think it did until I had my crisis in the Labor and Delivery room. At that moment I realized that memorizing prayers accomplishes more than I tend to give it credit for. Having the Hail Mary memorized meant I didn’t have to think about how to pray or what to pray; the prayer came to my mind as naturally as breathing.

In an overstimulating and frightening moment, this was a real gift. As I prayed the memorized words, words that, frankly speaking, don’t mean much to me most of the time, I felt peace—an experience of God’s love—wash over me. In other words, having a prayer memorized made my faith and my God accessible to me in a moment of need.

I recently read a story about the coaching methods of Anson Dorrance, the University of North Carolina’s women’s soccer coach and a man with one of the most successful coaching records in the history of athletics. In addition to all the expected strategies—the conditioning, the stretching, the drills—Dorrance requires his players to memorize three different literary quotes every year, each quote chosen because it communicates one of the team’s core values. Dorrance understands that in moments of challenge on the field, his players’ minds are going to go somewhere, and he’s paving the way for them to go to positive places by filling them with quotes that communicate courage, strength, possibility, and grit. Where players’ minds go, their actions follow.

What we have memorized forms a soundtrack to our lives; just like music has the power to influence our mood and our energy, so does this mental soundtrack. We can’t necessarily choose when the music strikes or which song it plays in a particular moment, but we can control, at least to a certain degree, what we burn onto the soundtrack in the first place.

For many of us, the contents of our soundtrack were determined by our parents, teachers, siblings, or television habits during our early years of life. Anytime my siblings and I fought throughout our childhood, my mom drove us crazy by singing the Prayer of St. Francis. Now, when I’m about to return a passive aggressive comment with a snippy one and am able to refrain because the words “make me a channel of your peace” run through my head, I’m grateful. On a less noble note, most trips to the library trigger the somewhat irritating “having fun isn’t hard when you’ve got a library card” chant from the PBS show Arthur.

Whether our soundtracks are full of the aphorisms of our parents, poems we memorized in seventh-grade English class, jingles from shampoo commercials, or Latin declension endings, the good news is that they are not set in stone. They are rewritten constantly, and we can control what goes on them by intentionally choosing to memorize particular poems, scripture verses, passages from books, or prayers; adding a track is as simple as repeating the words we desire to memorize over and over again. The extra bonus to the practice of memorization is that reciting repeated words has been shown to slow respiration, thus inducing calm, as well as to improve concentration. Memory, after all, is like a muscle; the more you use it, the more you strengthen it.

There is no shortage of prayer practices within the Catholic Church, and I am grateful to be a part of a tradition that offers various methods of connection with God. Acknowledging that our preferences and desires are as God-given as our talents and abilities, I don’t think there’s anything wrong with gravitating toward certain practices. At the same time, I am also grateful for the life experiences that push me to stay open to new ways of knowing God and deepening my faith. My experience during the birth of my daughter was one of those experiences, as it led me to feel the calming touch of Mary and helped me see the value of memorization.

Memorizing prayers is like putting money into a retirement savings account: It’s easy to forget the account exists because it’s inaccessible for the foreseeable future, but then it’s there for you at the time you need it most. Now I see that it’s worth spending some time investing in this account and helping others to do so as well.