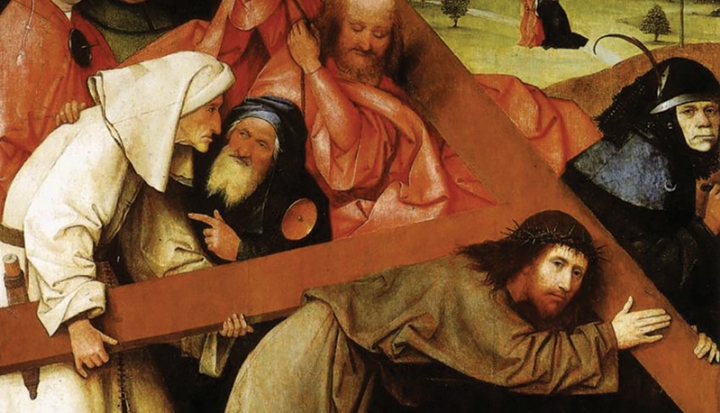 After many years of sitting under and praying the stations, it was only fairly recently that I noticed the hooked noses. Since then, I’ve recognized other Jewish stereotypes in stations in numerous churches, including thick lips and even horns. Conversely, in a bleaching of his Jewishness, Jesus sometimes has lighter colored hair than the Jews around him.

Besides these physical characteristics, it’s common to see a rigid religious legalism depicted in portrayals of ancient Jews. Many stations contain religious figures with arms tightly crossed, aloof, looking indignantly at the scene and gesturing accusingly at Jesus or urging him toward Calvary.

Although it seems incongruous, many, many stations include a Jewish religious figure holding a scroll. While one must always suspend disbelief about the historicity of the artistic choices made on the small scenes depicted in each station, it seems beyond unlikely that someone would bring a religious scroll to a crucifixion. (What other kind of scroll could it be?) In the 11th station in my church, for example, the bearer motions to the unrolled scroll, discussing it with a colleague, presumably to justify Jesus being nailed to the cross in front of them. In another set, the man clutches the scroll to his chest and points at a fallen Jesus.

This goes well past theoretically depicting actual individuals, such as Caiaphas. So why is the scroll there? Some would see it as part of the religious rejection of Jesus, which is not an integral part of salvation history and seems irrelevant. More than just repudiation by the existing religious establishment, the scroll must signify the Law (which is much more permanent than the current high priest) and, by extension, those who live by it. Metaphorically, its presence points beyond Jesus’ contemporary Jewish leaders to accuse all Jews.

Various scholars, including Sara Lipton, Ruth Mellinkoff, and Heinz Schreckenberg, have found that such stereotypes are common in medieval Christian art, as well as in theological scholarship and commentary, and meant to separate, vilify, and condemn Jews. While the stations in American churches are much more recent, it’s not hard to imagine that these stereotypical stylings survived because it was the way artists—even if they lacked malicious intent—learned to depict Jews. The same might be said for some theologians and priests.

When I asked experts about my observations, some weren’t surprised while others resisted, dismissing my view as political correctness. One asked if I had Jews in my family, which apparently explained—and invalidated—my perceptions. Some told me the presence of Jewish religious figures shows the religious renunciation of Jesus and is not a broad condemnation of Jews. A few asserted that the compassionate expressions of Veronica, the women of Jerusalem, and Joseph of Arimathea proved the stations are not anti-Semitic.

There may be something to this, but it recalls a review of The Passion of the Christ that observed, “The only good Jews were Christians.” It was also suggested that I might as well see the stations as anti-Roman too for their unfriendly depictions. Maybe, but the point would be stronger if Romans had been victims of violent prejudice for millennia.

As the church has maintained for centuries, however, the responsibility for Jesus’ death falls on all sinners at all times, not exclusively, or even disproportionately, on Jews. Drawing from the 16th-century Roman Catechism, the Catechism of the Catholic Church notes, “The Church does not hesitate to impute to Christians the gravest responsibility for the torments inflicted upon Jesus, a responsibility with which they have all too often burdened the Jews alone.”

While most Christians profess this teaching of universal responsibility (in The Passion of the Christ, the hands that pound the nails into Jesus belong to director Mel Gibson to acknowledge his shared responsibility), over the centuries many have nonetheless also been able to ascribe extra—or, as the Catechism acknowledges, exclusive—blame to the Jews, leading to pogroms, genocide, and now to marches and chilling chants in 21st-century America. Some scholars assert that Christian art has a role in stoking such hate.

I don’t think this makes the stations anti-Semitic as a devotion: I believe most devotees think about their own responsibility and not about the Jews’. But I do think it’s important to take note that some stations of the cross sets, often from before Vatican II, indulge in anti-Semitic stereotypes. Setting aside any judgment on those earlier artists, what are we to do about offending stations in our churches today?

Equivocating as it may seem, I don’t argue for mass removals or replacements of stations (although, interestingly, the National Cathedral in Washington recently removed stained glass windows bearing the images of Confederate generals). Not all stations sets are “guilty.” Many have cultural significance, and some are beautiful. But it seems important to take advantage of a teachable moment. After all, if the stations are meant to help us reflect on Jesus’ sacrifice, shouldn’t we be aware of elements in them that—intentionally, consciously, or not—deflect our responsibility?

One church where I found stereotyped stations was a newer building with, no doubt, stations transferred from an older one. The new structure’s more contemporary stained glass windows featured images that celebrated Christianity’s Old Testament Jewish heritage. The stained glass tablets of the Ten Commandments were near the station with the Jewish scroll-bearer, a juxtaposition that prompts interesting discussions.

At the very least, this discussion seems one worth having, and the church itself may provide theological guidance. Nostra Aetate (Declaration on the Relation of the Church to Non-Christian Religions) argues that “what happened in [Jesus’] passion cannot be charged against all the Jews, without distinction, then alive, nor against the Jews of today. . . . The Jews should not be presented as rejected or accursed by God, as if this followed from the Holy Scriptures.”

Other Vatican and U.S. bishops’ documents offer more specific principles. The bishops’ “Criteria for the Evaluation of Dramatizations of the Passion” asserts, “Jesus must not be depicted as opposed to the Law (Torah).” Although they are referring to Passion plays, the admonition certainly encompasses visual art as well: “The use of religious symbols requires careful evaluation. Displays of the menorah, tablets of the law, and other Jewish symbols should appear throughout the play and be connected with Jesus and his friends no less than with the Temple or with those opposed to Jesus.” One could assume this also applies to scrolls held by Jewish religious figures in the stations.

Just as some think I see too much in some stations, I’m sure others see more. Not all the stations sets I saw contained offensive elements. Stations deserve more analysis, by both scholars and congregations—an assessment that should also include Jewish perspectives.

My argument might be summarized in what the Vatican’s “Notes on the Correct Way to Present the Jews and Judaism in Preaching and Catechesis of the Roman Catholic Church” said more than 30 years ago: “The urgency and importance of precise, objective and rigorously accurate teaching on Judaism for our faithful follows too from the danger of anti-Semitism which is always ready to reappear under different guises. The question is not merely to uproot from among the faithful the remains of anti-Semitism still to be found here and there, but much rather to arouse in them, through educational work, an exact knowledge of the wholly unique ‘bond’ (Nostra Aetate, 4) which joins us as a Church to the Jews and to Judaism.”

Rather than condemn the stations of the cross or the church, such educational work should identify and treat a long-festering tumor. Whether from the altar or in small groups, such analysis may be uncomfortable—consider reactions to the removal of Confederate statues—but it ought to happen. When anti-Semitism reemerged from the shadows, the U.S. bishops quickly condemned the racism and “neo-Nazism” that appeared tragically in Charlottesville, Virginia. We should also be prepared to shed light on our own history, especially what’s hidden in front of our eyes.