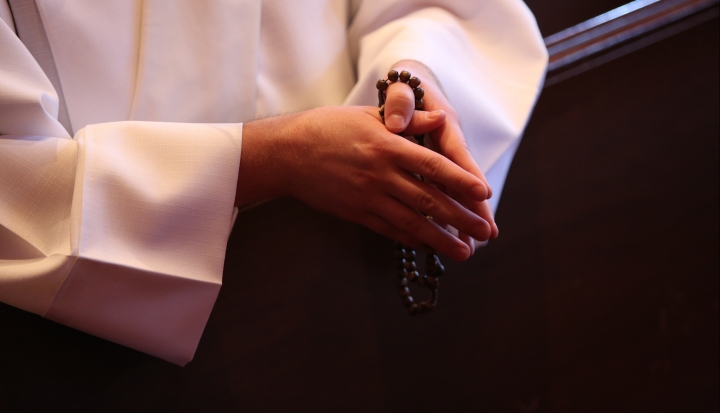 In a room full of anxious ninth graders, you could hear a pin drop. Before handing out the math exam, we began with silent prayer. As each began to pray to Jesus, Mary, or our favorite saint to intercede on our behalf, Sister Marilyn cautioned us to choose our words carefully. Pray for clarity or to remember what you studied, she instructed, for if we did not study, prayer was not going to magically deliver the answers.

Prayer before an exam is a moment so ubiquitous that it can become reflexive. Yet this was precisely when Sister Marilyn urged us to be deliberate and careful. Years of Catholic schooling emphasized the importance of prayer, but she was the first to emphasize the importance of how and for what we pray.

During a recent visit to my parents’ parish, I found myself unable to participate fully in the prayers of the faithful. “We pray for members of the military deployed overseas, that they succeed in their missions and return home safely to a grateful nation.” As the community responded, “Lord, hear our prayer,” I stood silent. I often pray for the safe return of deployed servicemen and women, but this was different.

In praying for military success, the community is praying for bombing campaigns and drone strikes, surrendering moral judgment about such campaigns. The U.S. military is currently providing intelligence and logistical support for the Saudi-led war in Yemen, which has caused unimaginable suffering and death to civilian populations. I do not know what the U.S. military considers as “success” in Yemen, but I know their metrics are not those of the gospel. When you pray for success in military missions, it is the military’s definition, not the gospel’s.

Words matter. Consider instead, “We pray for members of the military deployed, for their safe return, and for peace in all communities experiencing war and violence.” It is possible to include a specific prayer for deployed parishioners without sacrificing our collective prayer for peace.

Scripture urges us to approach God with humility. Nowhere is this clearer than in the juxtapositions of Ash Wednesday. As we collectively acknowledge our sinfulness, marked publicly with a cross, “Remember you are dust and unto dust you shall return.”

At the same time, we hear from the Gospel of Matthew, “When you pray, do not be like the hypocrites, who love to stand and pray in the synagogues and on street corners so that others may see them. Amen, I say to you, they have received their reward. But when you pray, go to your inner room, close the door, and pray to your Father in secret.” This passage and the public marking of ashes seem ironic and contradictory. However, the focus in both is a stance of humility before God and the community.

Humility and responsibility in prayer are what Sister Marilyn was trying to teach us in that brief moment before our algebra exam. I think back to that lesson often as I try to focus to pray and ask three questions about how I pray: Where is God? Where am I or we? And, who or what am I missing? Asking who or what am I missing pushes for greater humility and redirects one’s gaze toward the margins, toward those implicated but invisible such as civilian populations who bear the brunt of war’s violence.

Through prayer we shape our communities and ourselves. In faith we believe prayer is powerful. For these reasons, Pope Francis has called for global prayer vigils for Syria and for a humane response to the global migration crisis. And always, humility and discernment are paramount. It is not enough that we pray. How we pray matters. Our language makes a difference.