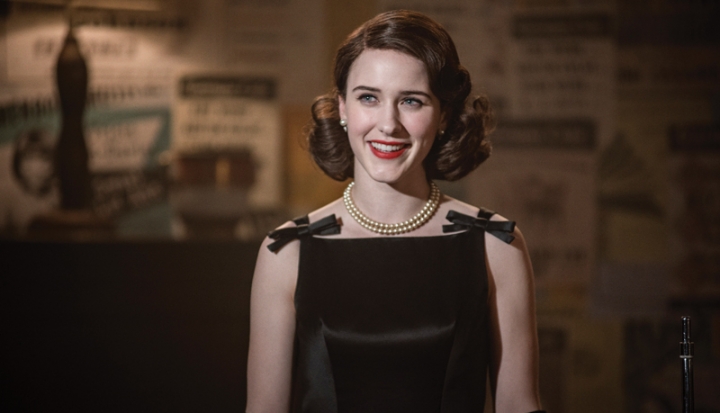 Amazon’s knockout series The Marvelous Mrs. Maisel swept the Emmys, pocketed two Golden Globe awards, and was just renewed for its third season even before its second debuted in December. Created by Amy Sherman-Palladino, who is executive producer along with her husband, Daniel Palladino, the show features their signature rocket-speed dialogue, snappy repartee, and sassy pop culture references, set against technicolor-hued sets and Edith Head-worthy wardrobes.

The hats! The hatboxes! The handbags! The furs! It takes half a dozen industrial clothing racks rolling around in a bedroom of the endless (and certainly multi-million-dollar) Upper West Side New York apartment of her parents just to hold the outfits that upholster Midge Maisel and her mother. (How are these people subsisting on a professor’s salary, even in 1958?) The web now has many a guide to “dressing like Mrs. Maisel.” Skirts and kitten heels are back.

Cary Grant and Kate Hepburn would be right at home on these sets. Apartments have exquisite woodwork and mile-high ceilings. Cars are the colors of gumballs and just as shiny.

Well-dressed, perfectly coiffed, and cossetted in this swanky upbringing, young mother Midge (the luminous Rachel Brosnahan) launches a secret career in standup comedy. We are meant to think of Joan Rivers, who, like Midge, could be brittle, offensive, and harsh onstage. Rivers, however, made her bones by insulting herself, mocking her feigned inability to conform to feminine ideals of physical beauty and sexual attractiveness. Midge is beautiful—we know this because all the other characters say so—and performs in little black cocktail dresses, playing off the outrageous conceit that a seemingly perfect wife could have a life, a point of view, and the moxie to speak it out loud.

This is a show about a female comic with a female manager, existing at an historic moment in which the only people expected to hold such jobs were men, but is it a feminist show? Its creators brought us Gilmore Girls and Bunheads and work smart, witty moments into storylines that appear to comment on a woman’s place or lack thereof—one character evokes a young Yoko Ono, another is a female artist who labors in obscurity while Jackson Pollock-like fellows get all the fame, and the male comics Midge encounters act like sexist thugs.

Like Midge, Mrs. Maisel is pretty but not without substance. It raises questions that still resonate: Are women funny? Who gets to judge? And what are women allowed to be funny about, precisely? Midge cracks wise about husbands, married sex, contraception, and, you know, girl stuff, but there’s a wiser edge buried in her material. Perhaps season three will show us a Midge of the Second Wave women’s movement who really lets it rip.

In other ways, Mrs. Maisel could hardly be mistaken for a feminist manifesto. Midge has young children, whom we rarely see. When we do, Midge barely makes eye contact with them. They are magically absent for long chunks of time, and it is difficult to connect with single mother Midge who, apparently, never has to arrange for child care. In a truly wonderful episode about a family vacation in the Catskills, Midge participates in a swimsuit competition, goes dancing, takes a boat ride, and goes out to dinner. Where are the children?

It’s odd that Midge is so connected to her parents yet so disconnected from her children. Then again, other television programs starring male characters never fret about who’s watching the kiddos while Daddy Detective solves crimes and builds his career, so never mind.

Unquestionably, Rivers broke hard ground as a woman comedian (a profession that even has a feminine name form, comedienne, as though those are two different jobs altogether). Once she moved beyond insulting herself before the men could do it for her, she was often at her best with her wry observations about relationships between the genders. She was a truth-teller, that one. Rivers was also well known as a tireless worker, something we are not shown about Midge.

We do not see Midge writing jokes, struggling with timing, and studying her craft. She puts on a cocktail dress, stands at a mike, and usually brings down the house, apparently effortlessly. In season two, we do see her and her agent—the Emmy-winning and brilliant Alex Borstein as Susie—on a grubby road trip tour of gritty clubs and bad motels. Midge, who until this point has been unaware that there exist hotels without bellmen, deserves this comeuppance and class awareness for us to keep liking her. And for her standup material to improve.

Casting is faultless. Tony Shalhoub as Midge’s father is a master class, Marin Hinkle as Midge’s mother should be getting award nominations along with everyone else, and Michael Zegen as Midge’s weak-willed husband, Joel, is annoying, as he should be.

At the end of season two, Midge—privileged, adored, beautiful, desired Midge—announces that, in order to succeed as a comic, she will have to live her life alone. Ouch. An odd conclusion, given that her husband wants her back, her boyfriend just proposed to her, and her career is rising like a hot air balloon. She has free invisible daycare and enough money for Chanel hats. Midge shouldn’t fall for that insidious myth about women and careers.

Go ahead, Midge. Have it all. It looks like you already do.