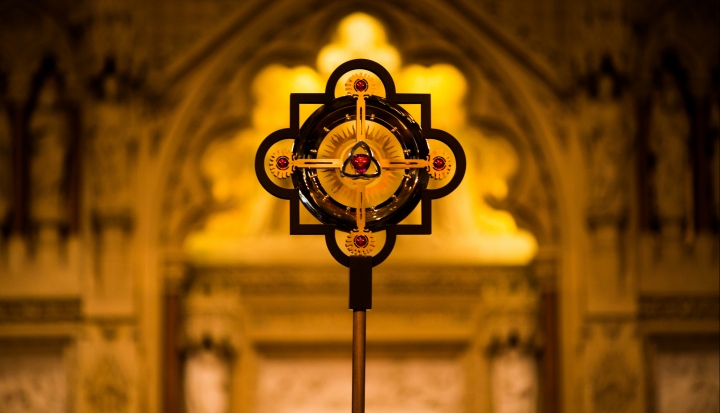 One of the paradoxes of our Catholic faith is that its foundational element, belief in the Trinity, the flour to the bread of Catholicism, cannot be understood through human reason. The mysteriousness of the Trinity, however, hasn’t stopped the church from spending centuries examining and clarifying its doctrine. The core elements of the Trinity are described in no uncertain terms: God is only one, but exists in three distinct persons. The divine persons do not share one divinity but are each wholly and entirely God, existing in relationship with one another.

We almost exclusively refer to these three persons of the Trinity as “Father, Son, and Holy Spirit,” but we also know that God is without gender. Is it possible to think of the three persons in any other way?

Since it can’t be deduced through logic, the nature of the Trinity is only known through revelation by God, mainly through the life and words of Jesus. Jesus refers to God as Father, telling his followers that “I and the Father are one” (John 10:30).  At the Last Supper, Jesus tells the apostles that though he is leaving them his Father will send the Holy Spirit to teach and guide them. It is largely through Jesus, therefore, that we have come to know the three persons of the Trinity as the Father, the Son, and the Holy Spirit.

Using these names to name the ineffable has both benefits and disadvantages. The merit of naming the persons of the Trinity is the merit of naming anything: A name encapsulates meaning. Father connotes a creator and transcendent authority with the loving and tender care of a parent. Son implies “begotten,” or coming forth from, and Spirit suggests pervasiveness, something that has an origin but is uncontainable.  Each of these names tells us something about the nature of each person of the Trinity while highlighting their intimate relationships.

The disadvantage of naming the persons of the Trinity is that names can limit our understanding of God. God, who transcends the human distinction between the sexes, is no more a Father than a Mother. Jesus is the Son of God, but the point of the incarnation is less about God becoming a man, and more about God loving us so much that God decided to walk among us as a human. Given the sociopolitical culture of the time, perhaps it was pragmatic of God to come as a man, but the message of the incarnation would remain the same if God’s daughter had been born in Bethlehem.

Father, Son, and Holy Spirit; Mother, Child, and Breath of God; Creator, Redeemer, and Sanctifier; no matter the particular names you choose, the core message of the Trinity remains unchanging. God is God, relational in nature, manifested in three distinct ways, and an example of perfect communion.