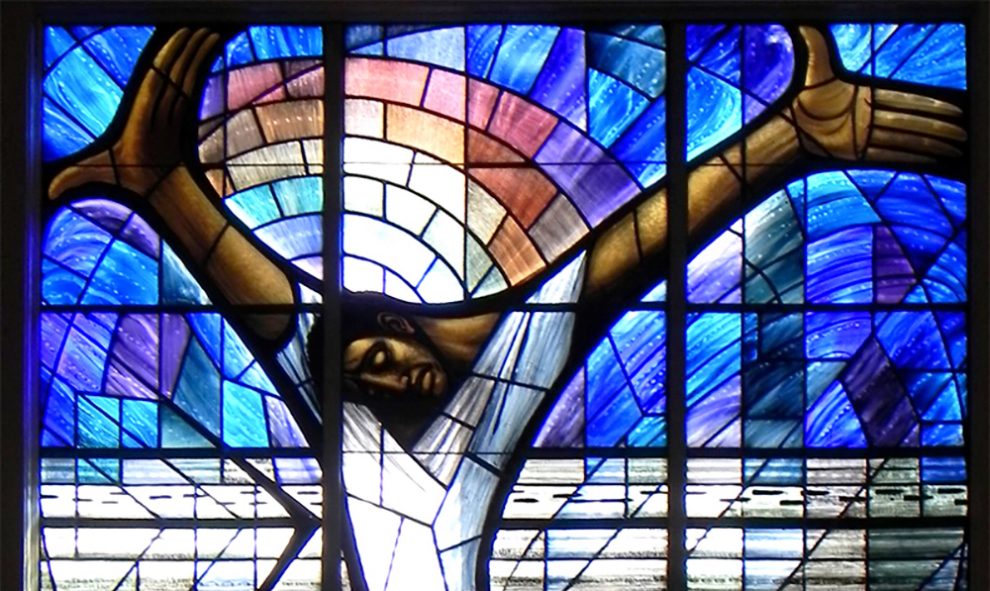 When racists bombed the 16th Street Baptist Church in 1963, four young girls attending Sunday school were killed and another 22 people were injured. It was one of many horrific acts of hatred directed at the black community, this time while they were in the midst of prayer.

During the destruction a traditional stained glass image of Christ was damaged: Jesus’ face was shattered in the explosion. When asked his thoughts about the disfigured image, writer and social critic James Baldwin responded, “The absence of the face is something of an achievement, since we have been victimized so long by an alabaster Christ.”

These words may be jarring to some and ring deeply true to others. What can’t be ignored, however, is the realization that images of Jesus can be used to liberate or to oppress.

Jesus has had many faces throughout the history of art. Christianity has touched countries and cultures around the world, and as a result the soul of each culture is expressed in Christian art. A deeper comprehension of the significance of the incarnation, in fact, demands such depictions. That Christ took on our humanity means that each culture, race, and gender fully represents Christ.

Consider this 17th-century Ethiopian Orthodox icon. Not only is it a testament to the long history of Christianity in Ethiopia, but it also attests to the perennial value of inculturation. Both in his crucifixion and his resurrection Jesus is depicted as one of the people. His hair, the color of his skin, his facial expression, and his clothing all affirm that he has taken on the humanity of this unique people in all their particularity. What is depicted is truly a shared humanity. The offer here is not only salvation but also solidarity.

Solidarity can be especially meaningful in times of suffering and oppression. The people of Wales presented the community of the 16th Street Baptist Church with this stained glass window after the 1963 bombing.

In it we see a dynamic swirl of colors: blues and purples. This chaotic movement is juxtaposed with the stability of Christ. Here stands a strong black Jesus, powerfully calming the tides. A look of anguish crosses his face; as the inscribed biblical text reminds us, acts of hatred, violence, and racism directed at Christians are equally directed at Christ himself. It is a profound showing of solidarity.

Yet just as the civil rights movement adopted the traditional African American spiritual “We Shall Not Be Moved,” this image of Christ is “like a tree planted by the water” and will not be moved by tides of injustice. Instead his strong arms and hands stretch to the very frame of the window, symbolically expressing an ecclesial message: It is Jesus who holds the church together, and he shall not be moved.

Jesus again is the central figure in Herbert Singleton Jr.’s potent image The Miracle of Jesus. Like his accomplished artistic contemporaries Thornton Dial Sr. and Betye Saar, Singleton uses commonplace objects to emphasize the connection between art and everyday experience. In The Miracle of Jesus he uses the multivalent symbol of a door, upon which he has carved and painted biblical scenes of Jesus.

As with most biblical scenes carved upon church and cathedral doors, Singleton’s artistic vision has a unique theological focus: He has selected seven miracles of Jesus, each accompanied by an evocative text: “my boy” (the nativity), “my man” (the baptism in the Jordan), “be calm” (the calming of the sea), “be born” (the raising of Lazarus), “your healed” (Jesus’ healing ministry) and “your saved” (crucifixion). These are framed by carvings of a large loaf of bread and a fish.

The central image of a black Jesus with arms outstretched offers this abundant food with the message, “I promise Everybody Is Gonna EAT.” Importantly, this feeding of the multitudes isn’t limited to a biblical event. Nor is it relegated to some distant eschatological fulfillment. The emphatic words bespeak a hope for those starving here and now not simply for spiritual food, but life-sustaining food. It is a hope-filled prophetic message that challenges many social and economic norms that leave people hungry.

Challenging injustice is a perilous act, as Rosa Parks, Martin Luther King Jr., and so many others who prophetically witness to the God-given dignity of all human beings know all too well. They risk harassment, defamation, unemployment, jail, violence, death threats, and martyrdom. Racist hatred runs so deep it lashes out even at those simply trying to live their everyday lives, as theologian James Cone articulates well in his award-winning book The Cross and the Lynching Tree (Orbis).

This context helps inform a viewing of Fredrick Brown’s sublime and expressive painting Crucifixion. The somber landscape is punctuated with crosses, evoking a long history of violence. A mother weeps for her dead son. A bruised and bloodied Jesus screams in agony, experiencing the depths of human suffering. Evil is real, this painting tells us, and in Jesus’ face we see the brutalized black faces tragically all too commonplace in our world today.

Jesus, however, is not defined by suffering. Nor is he defined by salvation. In fact, Jesus is always bigger than any label or definition we might put on him. This is part of the great intrigue and allure of Janet McKenzie’s masterful painting Jesus of the People.

McKenzie brings us back to the essential reality of the incarnation and realization that Christian art is bereft without the full expression of humanity. As St. Paul reminds us, “If one member suffers, all suffer together with it; if one member is honored, all rejoice together with it” (1 Cor. 12:26). All sufferings and joys are embedded in Jesus of the People. The crown of thorns acknowledges a history of suffering and marginalization while the depiction of Jesus witnesses to a deep solidarity with all people.

McKenzie’s painting works to bring healing to the pain caused by oppressive images of Jesus. May it continue to inspire Christians to see Jesus as they ponder their own humanity and the humanity of others.