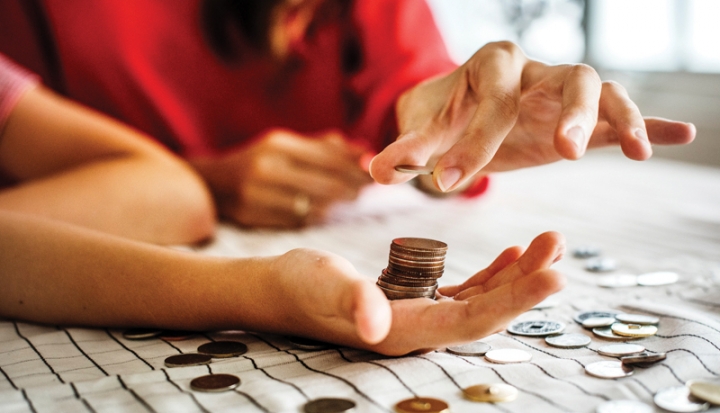 “Charity is at the heart of the church, it is the reason for its action, the soul of its mission,” said Pope Francis in September 2017 during the feast of St. Vincent de Paul in Rome. As Catholics it is our duty to help those in need, and often that takes the form of financial giving. However, how we donate our money, whether through monthly donations to a parish or an annual check to a favorite charitable organization, differs from one person to the next. U.S. Catholic surveyed readers to find out to whom they give financially and why they donate money to charity.

Of the 382 people who took the survey, most gave a significant amount of money to both their parish and outside charity organizations. Twenty percent said they give as much as they can without causing financial strain, and 32 percent described their giving as “generous.” In fact, 38 percent of readers said they donate at least 10 percent of their income yearly to charity while 35 percent said they donate between 5 and 9 percent.

“I give financially because it helps me to become detached from material things and grow in my relationship with God,” says Paul Byrnes of Swanton, Ohio. Readers were also confident in the charitable giving of their fellow parishioners. When asked what percentage of their parish members they thought also donated to outside charity organizations, 33 percent said between 20 and 50 percent took part in financial donations.

Some of these donations go to readers’ parishes: 95 percent say they give money to their parish. “I donate money to my parish because they do a lot for my personal spiritual growth. I feel at home there and I want to see my parish community flourish,” says Elaine Hicks from Greeley, Colorado. Of that 89 percent, 33 percent give between 2 and 5 percent of their yearly income, while 15 percent say they give 10 percent of their total income to the church.

Five percent of readers, meanwhile, choose not to donate to their parish. In contrast to Hicks, Fran Salone-Pelleter from Shallotte, North Carolina explains, “I donate to non-parish charities because they are more transparent with what they do with donations and are therefore accountable for their actions.” Likewise, Tom Rinkoski of Minneapolis says “although I love my parish, I do not believe they can address community concerns as well as some organizations that are specifically designed for targeted relief and action.”

That doesn’t mean readers aren’t generous with their money: 91 percent of readers choose to give to outside charities that reflect their spiritual beliefs and carry out the work of their faith, often on top of the money they donate to the church. “I give to charities outside of my parish because they are just as important as the church,” says Maureen McCarren from Conesus, New York. “The charities I donate to do more to help people than my parish would be able to alone,” says Peter Waricka from Atlantic Heights, New Jersey.

Other readers say that giving to outside charities is part of being a good Christian. “I like to donate to Clara’s House in Sacramento, a clinic for the undocumented who are sick or homeless,” says Michel Gallegos from Aberdeen, Washington. “When I give financially to them I feel I am doing what God expects of me as a good Christian.”

Altogether, the majority of survey respondents say they give to multiple charities: 69 percent say they give to four or more organizations outside of their parish, with the majority, 78 and 73 percent, respectively, giving to causes related to the church and social justice. “My favorite charity I donate to is Unbound,” says Kathy Siberz of Baraboo, Wisconsin, who donates most often to social justice causes. “I like it because I receive letters and pictures from the people I sponsor.”

Despite the overwhelming number of readers who say they donate money to both the church and outside charities, a large number of U.S. Catholic readers believe that many of their fellow parishioners do not financially support the church. Thirty-eight percent believe that less than 50 percent of their fellow parishioners contribute financially to their church.

Cecelia Grenier of West Lafayette, Indiana does not like to consider the financial donations of her fellow parishioners. “I would not presume to answer to the levels of giving in my parish or whether people give a certain percentage,” she says. “I know that on the whole the people in my parish are extremely generous with both their time and their money.”

In contrast to Grenier, most readers think that people could be more generous with their donations: 84 percent think most people do not give as much as they could. Despite this, readers did not feel that their parishes put pressure on their congregation to support the church financially. Seventy-five percent said they did not feel their church expects them to contribute a certain amount of money to the parish.

Whatever the charity, U.S. Catholic readers’ comments demonstrate the priority placed on transparency. “I do not regularly donate money because many organizations do not disclose how their financial donations are spent and are not held accountable for their use of it,” says Charles Dahl from Minneapolis.

Like Dahl, Brother Alan Parham from St. Louis is also wary of financial donations. “I do not give money to charity on a regular basis because I fear too much of it goes to operating costs instead of to the cause I am donating to,” he says. However, despite these concerns, 74 percent of readers still said they preferred financial donations to acts of service, such as volunteering their time at soup kitchens.

Other readers stated that they did not have the means to donate and instead took part in service work. “I volunteer my time because I don’t have much money. I work for a parish and have low wages,” says Evelyn Brush from Milwaukie, Oregon. Heather Hayden of Dumont, New Jersey would also rather donate her service than her money. “My entire family serves our community as volunteer EMTs,” she says. “For us, it is the most Christ-like service. It saves the individual patients thousands of dollars and is the most direct way to seek Christ in others.”

No matter how you donate, U.S. Catholic readers agree that charity is at the core of Catholic beliefs. Patty Amato of Claremont, California says, “Although my family did not have much, my parents taught us that it’s vital to do what you can. God calls us to be charitable, and giving, either financially or with service, is how we can show our gratitude and love for God.” Mike Ghiorso from Daly City, California sums up what many other U.S. Catholic readers expressed: “I give financially because I cannot physically serve at all the different places that are so heavily in need, but I can reach them with money. So I give to those I cannot serve.”