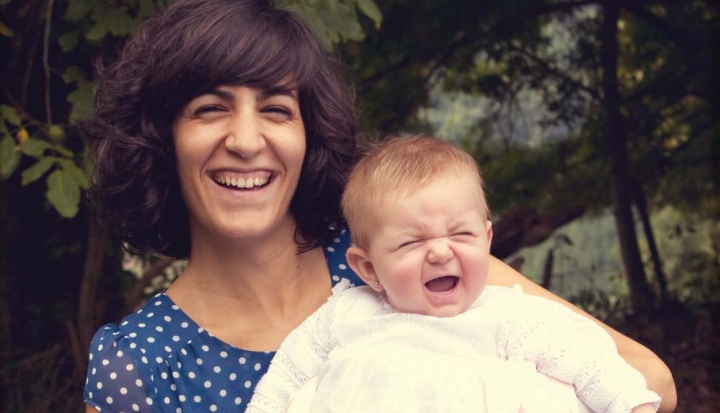 It was 1994, a year in my life best represented by Doc Martens and dark red lipstick. But it was also the year my best friend married young and had a baby, disrupting our social life and making me a godmother all at the same time.

Time-indulgent nights spent drinking coffee at Denny’s until two in the morning were derailed by the new baby’s needs. I resented the disorder and yearned for a return to our carefree afternoons playing hacky sack and exploring downtown shops. While my BFF was learning how to be a wife and mother, I was resisting the transition into adulthood and giving little thought to the job laid out for me as godmother.

The role of godparent has roots going as far back as the year 800, when a sponsor was identified at baptism who would accept the responsibility of instructing a child in the faith. Canon law states: “Insofar as possible, one to be baptized is to be given a sponsor who is to assist an adult in Christian initiation, or, together with the parents, to present an infant at the baptism, and who will help the baptized to lead a Christian life in harmony with baptism, and to fulfill faithfully the obligations connected with it.”

It wasn’t that I was a terrible choice for this job. At age 19, I attended Mass regularly and was in the beginning stages of making my faith my own. But my faith was immature at best, and it was greatly hindered by a stunning show of selfishness. My days were devoted to building a must-have CD collection instead of a must-have spiritual life. I wanted to be a good godmother to the baby, but frankly I wasn’t a terribly good person at the time. Shepherding someone else’s faith life was out of the question entirely.

I wanted to be someone who “leads a life in harmony with the faith and the role to be undertaken,” but I wasn’t there yet. Because of this, not long after my goddaughter was born, I left. I mean, I really left. I left the city, the state, the country, and the grid, taking up temporary residence on a Catholic commune in Combermere, Ontario.

I didn’t move onto a commune because I became a godmother, but rather because I didn’t know who I was or what I was called to do with my life. I headed nine hours north of my home in Grand Rapids, Michigan with a strong sense that a deep spiritual life was calling me and that an intense communal experience might be fun. On both counts, I was right.

Time at the Madonna House commune was highly regimented with prayer, silence, and obedience married to every activity. I didn’t know it at the time, but I was starting on a path toward becoming the witness to light Pope Benedict XVI spoke of in a 2010 homily: “The children who are about to be baptized must walk in this light throughout their lives, helped by the words and example of their parents and their godparents. The latter must strive to nourish with their words and the witness of their lives the torch of the children’s faith so that they may be shining example in this world of ours, all too often groping in the darkness of doubt, and bring it the light of the gospel which is life and hope.”

But I wasn’t there yet. I was only beginning. Much as I had resisted adulthood, I bucked at the commune schedule. I hated being told what to do and when to do it. I hated the chores. I hated the silence. After weeks of unyielding discipline, it was a set of salt and pepper shakers that finally broke me.

I was asked to empty dozens of salt and pepper shakers, clean them, and refill them. Surely this task was unnecessary, I thought. Surely this was not a real job that needed to be done. Surely someone else was better suited for this activity.

I watched the sparkly mountain of coarse salt grow on a tray before me as I emptied bottle after bottle. The granules peaked and cascaded and I began to weep aggressively, angrily, and openly. My hands, arms, and shoulders went limp with a sort of hollowed out grief, as if all my insides were what had been dumped out on the tray. All I could do was cry.

The events that followed were a blur. I was relieved of the job for a while only to return to it feeling lighter, unburdened by everything I had been carrying. I left Madonna House not long after, my time there having reorganized the young woman I was, shifting something essential in my core. I was still an artsy type with combat boots, but habits from the commune—a steady prayer practice, frequent daily Mass, and regular confession—became a part of my life.

These new habits put me in greater contact with the life God was calling me to. It was then that I started to become someone who could really put the God in godparent. Godparenting, I was learning, is a spiritual practice not unlike emptying and filling salt shakers.

While I pray for my goddaughter regularly and try to remember her on her birthday, my greatest obligation to her is the tireless pursuit of God in my own life. And that tireless pursuit often looks like emptying salt and pepper shakers out onto a tray, washing them in hot soapy water, patiently drying them, and refilling them because I was asked to.

This is to say I don’t always understand God’s plan. I don’t always want to go to church where I have to be quiet. I don’t always want to get up with my kids and feed them and play with them and do the parenting job God asks me to do. I’m not a particular fan of God’s time versus mine, that tedious cascading of granules down an ever-growing mountain when I’m sure I can make things happen so much more quickly. The everyday-ness of my faith life, accepting the call that ultimately lightens my load rather than burdens me, is the spiritual practice of godparenting because godparents have an audience.

Being a godparent is the burden of “Hey, someone’s watching. Do it right.” One of my nieces, my daughter’s godmother, had this to say: “Being a godmother has given me a stronger faith and holds me accountable for my faith. I have been chosen as a godmother because of the model I try to set.” But she admits she has “a lot of growing to do” in her faith and she is “still discovering who God is” and what God’s role in her life is.

We chose my niece as a godmother for the same reason I was probably chosen. There is a light in her, one that promises to shine ever brighter as her spiritual practice grows, illuminating for our daughter an example of what living for God looks like. It’s that walk, that stumbling, that difficult acceptance of cleaning salt and pepper shakers, that I want my daughter to see. Because it’s the moment after we accept that where our light becomes the brightest and the God in us can best be seen.

I will never know if the godparenting I have practiced has had much influence on my goddaughter’s life. What I do know is that, one grain of salt at a time, I will keep showing up for the job, doing the work, and engaging in a practice that I can only hope will serve as a light for anyone who might be watching.