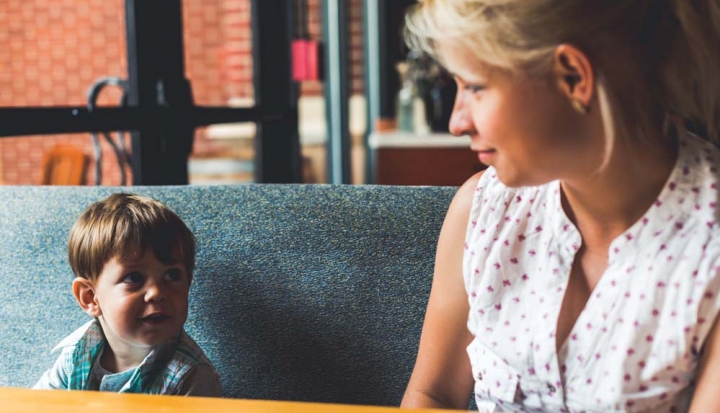 I was making dinner last January, my then-3-year-old following me around the kitchen like an insistent cat in want of food, when he asked me a question I didn’t immediately have an answer to. Last year was only the beginning of such questions, and though he’d already bombarded me around Christmas with deep theological inquiries about the conundrum of how Jesus’ father could be God while he at the same time is also God, I was unprepared for this new one.

“Why did they put Martin Luther King Jr. in jail?” he queried, rounding his R’s and L’s so they sounded like long O’s and W’s, respectively.

I stalled: “That’s a really good question,” and I glanced down at his three-foot frame. Big blueberry eyes stared up at me from behind a curtain of smooth brown bangs, expecting the clear answer only a parent can provide.

Two years ago, he’d caught glimpses of the Women’s March on TV, enormous amoebas speckled in shades of pink that moved and shifted in the epicenters of cities across the globe. I’d hugged and kissed him goodbye early that morning and made my way to downtown Chicago with a group of women from my parish. But what a difference a year makes. At 2 and a half, he was satisfied to simply wave at the TV when his father pointed at thousands upon thousands filling Grant Park and said, “There’s mama!”

Bromleigh, an acquaintance of mine, shared that her 5-year-old pointed out that if not for the work of King, she and her best friend could not have been friends. At first, I thought, “You got off easy. You didn’t have to open a whole can of worms.” But Bromleigh said she didn’t know where to go from there—how to continue naming ongoing racial injustices in age-appropriate ways. My friend, it seems, also wasn’t sure how to open the can while keeping the worms from spilling out in an uncontrollable mess.

Despite our inclinations to encourage in our children what is so often referred to as colorblindness, another acquaintance, who recently wrote a chapter on talking about racism with children in her book Parenting Forward: How to Raise Children with Justice, Mercy, and Kindness (forthcoming from Eerdmans), points out that this isn’t constructive. In fact, to do so is to exercise privilege at the expense of parents and children of color: “By believing our children to be colorblind, white parents ignore the patterns of racial inequity that are entrenched in society and through their privileged lens, enjoy watching their white children play carefree with black children, while black parents suffer gnawing anxiety as their black boys begin to grow into black men with a system built to marginalize, diminish, and harm them.”

This makes sense. Had my son had asked me about gender relations, an answer would have easily come to me. But when it comes to race, I am tripped up. In this context, it’s me and my family who enjoy what I’ve been referring to as microprivileges. As a women, I’m familiar with microaggressions, those often unintentional comments and slights directed at a marginalized identity group.

I’ve decided to start taking note of my microprivileges, not so much to point them out to my preschooler, but to increase my own awareness of how the deck is stacked in favor of me as a white person.

One such microprivilege is being able to feign colorblindness, when the reality for my friend, the mother of one of my son’s best friends, knows that she has to work twice as hard to make sure her black son isn’t passed over for the same opportunities in school. Another friend has already had discussions with her black son about not pulling the hood of his sweatshirts up around his head when walking around the neighborhood. He’s 6. My son wears a hoodie almost every day. People think he’s adorable and will become an engineer.

While it’s true that my son has not assigned a skin color-based value to his friends, while he may never intentionally do so thanks to the fact that he will be reminded yearly of the work of Martin Luther King, he will continue to enjoy the privileges that come to him because of his whiteness.

And this question he posed about why we honor a man who was put in jail, the place he solely associates with bad guys, to me was an opportunity to begin to make him aware of that. Not because I am some super “woke” parent, but because I am a Christian parent. I do not hesitate to talk to him about the all-encompassing love of a just God. Why should I hesitate to also teach him that there is still a need for us as Christians to identify injustice and pray and work for healing?

I did stumble through an answer, explaining how some laws are unfair and how the only way to make people realize that is to break those laws. I reminded him that Martin Luther King believed, just like we do, that God loves everyone and everyone should be treated the same way, and that while things are better now, we still have to work hard to remind the world that no one should be treated differently because of the color of their skin.

My work isn’t done. He will no doubt have more questions, ones I feel even more ill-equipped to answer. But he was satisfied. For the rest of the night, anyway.