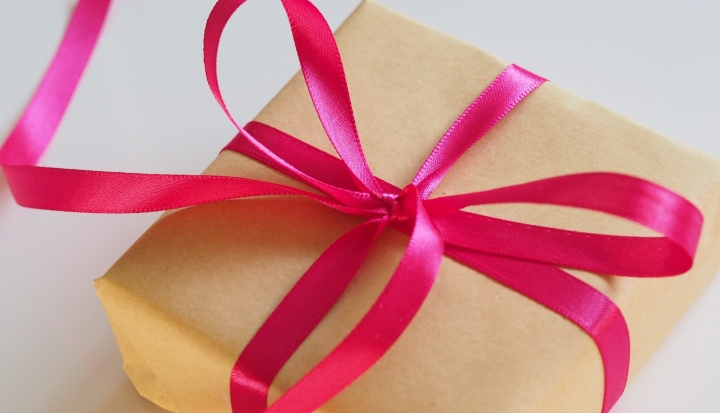 We have all been there; the thoughtful gift, selected with care, presented with pride. And we have absolutely no use for it. Maybe the gift is nice, but not to our taste. Maybe it is to our taste, and that’s why we already own that sweater or that book. We smile and thank the giver, reminding ourselves it is the thought counts. Then we look for a discreet way to dispatch of the gift. Can it be returned? Donated? Regifted?

Our contemporary Christmas gift-giving is a relatively new custom, emerging only in the 19th century. Drawing from ancient Roman customs, most gift-giving in medieval Europe happened around the New Year. The noble classes who ruled Europe were the most lavish gift-givers and were also the people most at liberty to regift or repurpose things they had previously received.

In 1405, Isabeau of Bavaria gave an intricate tabernacle to her husband, King Charles VI of France. Covered in jewels, the elaborate decorations included a carved figure of Charles himself kneeling in prayer before a figure of the Madonna and Child. Thoughtful and expensive as the gift may have been, it was not long for royal household. Within a year, Charles sold the tabernacle to help pay for, among other things, Isabeau’s brother’s wedding.

Other leaders could be even more ruthlessly pragmatic when it came to turning elaborate gifts into something immediately useful. In 1381 Louis I of Anjou melted down an entire collection of gold gifts and decorative objects, converting them to the cash he needed to outfit his army for a military campaign. None of his fellow nobles looked askance at this; they would have done the same in Louis’ position. One person, though, was appalled by Louis’ actions: Guisman of Cologne, the master goldsmith who had made several of the objects. Guisman was so distraught by Louis’ destruction that he gave up goldsmithing and retired to a Carthusian monastery.

Further down the medieval economic food chain, the emergence of an educated professional class of doctors, lawyers, and bureaucrats made books valuable and useful gifts. Still, books were difficult to manufacture, and sharing used books was the norm unless one really hustled. In a letter guilt-tripping his son, the medieval Jewish scholar Judah ibn Tibbon writes, “I have honored you by providing an extensive library for your use, and have thus relieved you of the necessity to borrow books. Most students must bustle about to seek books, often without finding them. But you, thanks be to God, lend and borrow not.” In 15th century Germany, parish priests would receive used books from their bishops or university faculty. After reading it and making a commentary, the priest would regift his book to the parish library.

While life among the lower classes in the pre-industrial world always involved a fair amount of mending or repurposing used goods, outright buying and selling secondhand merchandise was a more fraught affair than it was for the wealthy. In many places in Europe, Jews, who were legally barred from working in other trades, received licenses to sell secondhand goods or deal in salvage and scrap materials. Consequently, there was an anti-Semitic prejudice attached to these goods, as well as fears that the goods were unhygienic.

Old World prejudices against secondhand goods and their sellers were still strong in early 20th-century America, but would ultimately be displaced thanks to mass production and puritan ideas about thrift. When gift items such as clothing, housewares, and decorative objects could be mass produced, some American families found themselves in the unusual position of enjoying a surplus of these things. Simply throwing out older items that were still in good repair ran counter to a waste-not-want-not ethic.

The solution to this problem was the emergence of the thrift shop. Administered by upper-middle-class Christian women and selling items that had been legally obtained via donation, usually from other upper-middle-class Christian women, thrift shops were everything the secondhand dealer was not. Consequently, buying goods with such a pedigree made the buyers, typically immigrants and workers, participants in a more respectable middle-class American economy, rather than the immigrant economy of peddlers and scrap-dealers. Or least that was the vision of thrift store proprietors. Shoppers probably just wanted a few useful things at affordable prices.

The person who might be most sympathetic to our conflicted feelings about regifting is Mary. According to the Gospel of Matthew, sometime after Jesus’ birth, magi from the east visited the holy family. The magi, a term indicating they were likely Zoroastrian astronomer-priests from the Persian empire, brought gifts for Jesus: gold, frankincense, and myrrh. There is no mention what Mary does with these gifts. Maybe she and Joseph left the gifts behind in Bethlehem when they had to flee to Egypt to avoid Herod’s wrath. Despite being valuable goods, there is no indication that Mary and Joseph sold or traded them.

Nor do we learn of her possible befuddlement at the fact that, wise though they may have been, the magi did not know the three things new families really need are diapers, more diapers, and sleep. As thoughtful, useless gifts float around us, waiting for the battle between our guilt and our pragmatism to determine an appropriate home them, we may ultimately take strength in words from Saint Augustine, “those who possess superfluities, possess the goods of others.” This Christmas, regift in good conscience.