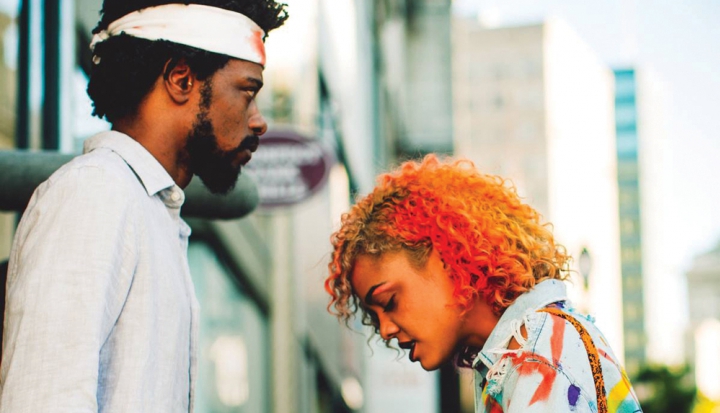 My nomination for the most important movie of 2018 has a plot that doesn’t involve superheroes or space travel, and its production didn’t involve any of the usual Hollywood oligarchs. It’s Sorry to Bother You, an independent feature written and directed by hip-hop artist, activist, and self-identified “communist” Boots Riley. The movie is a sort of magical realist satire built around a union organizing drive at a shady telemarketing company. It’s mostly a story about people in motion for the common good, and all through the summer it brought Riley’s vision of worker power into the shopping malls and cineplexes that are the very shrines of consumer capitalism.

Set in Riley’s hometown of Oakland, California, Sorry to Bother You focuses on a young African American named Cassius “Cash” Green (played by Lakeith Stanfield of the Atlanta TV series), who lives in his uncle’s garage. Cash is four months behind on his rent, and his uncle’s mortgage is about to be foreclosed, when he starts work at the Regal View telemarketing call center. On his first day at work, Green can’t sell a single encyclopedia set, until the older black man in the next cubicle, played by Danny Glover (another Oakland radical activist), tells him he has to find his “white voice.” He tells Cassius that he needs to sound not like white people actually sound but the way they “think they sound”—carefree and powerful. Green’s “white” voice is dubbed in by a white actor, and the character’s sales figures shoot through the roof.

Meanwhile, another cubicle-mate, a young Asian American called Squeeze, is organizing a union. Cassius joins up at first in a symbolic 20-minute work stoppage. But then he gets promoted upstairs, where he sells not encyclopedias but military hardware and contract labor. When his old coworkers go on strike, Cassius shows up in his new car and new suit and crosses their picket line.

Regal View’s biggest client is Worry Free, a company that signs people to a lifelong work contract in exchange for free room and board. Worry Free marketing is everywhere in the background of Sorry to Bother You, on billboards, television screens, and wall posters, and Green’s bankrupt uncle is seriously thinking about signing up. In the universe of the movie, the declining wages and “gig economy” of our real America have finally made people desperate enough to volunteer for slavery.

Cassius is exceptionally successful making sales for the Worry Free account and, as a result, is recruited by the firm’s Elon Musk-ish CEO for a top secret project that, in a satirical turn worthy of Jonathan Swift, actually involves manipulating the human genome to maximize labor output.

Boots Riley wrote the script for Sorry to Bother You in 2011 when he was up to his eyeballs in the Occupy Wall Street movement, but the timing of its theatrical arrival couldn’t be better. In the two years since the Trump election, teacher strikes have reenergized a floundering labor movement and democratic socialists have been on the march in the United States, winning local, state, and federal elections behind the idea that the country should be run by and for the people, not the corporations.

In fact, the days around my July viewing of Sorry to Bother You brought a dizzying array of art-life convergences. There was Bernie Sanders hosting a livestream town hall that contrasted the miserable pay and working conditions at places like Amazon and Disneyland with the incredible nine- or 10-digit salaries drawn by their CEOs.

Meanwhile, in Indianapolis, a 30-year-old African American welder named Antoine Dangerfield posted a video of Latino workers walking off the job at a construction site. The courageous stand of the workers, combined with Dangerfield’s gleefully profane narration, made the video an internet sensation. Dangerfield was fired for posting the video, but a GoFundMe page has raised more than $41,000 for him and his family. Then, to top it all off, a few days later the voters of Missouri repealed an anti-union “right-to-work” law by an incredible 2-to-1 margin.

At the end of Sorry to Bother You, a full frontal assault on corporate power has begun, but its outcome is far from certain. As that battle goes forward in the real world, there is plenty of room for convergence between workers, their unions, and the Catholic Church.

Each of the popes since Leo XIII has supported workers’ rights to form unions and strike. Perhaps the church’s most direct and succinct statements on the subject came from Pope John Paul II when, in his 1981 encyclical Laborem Exercens (On Human Work), he wrote, “Above all we must remember the priority of labor over capital: labor is the cause of production; capital . . . is its mere instrument or tool.” Ten years later, in Centisimus Annus (Commemorating the Centenary of Rerum Novarum), John Paul II added, “It is right to struggle against an unjust economic system that does not uphold the priority of the human being over capital and land.”

Every year since 1986, the U.S. Conference of Catholic Bishops has issued a Labor Day statement analyzing the current state of the economy from the perspective of workers and the poor. And every one of those statements has included a section championing the essential role of unions in establishing justice and promoting the common good.

The church’s position on the rights of labor has been widely disregarded in the United States during recent decades as union membership has shriveled from its 1954 high of 35 percent of all workers to the present 10 percent. But Sorry to Bother You is just one of many hopeful signs that a change could be coming around.