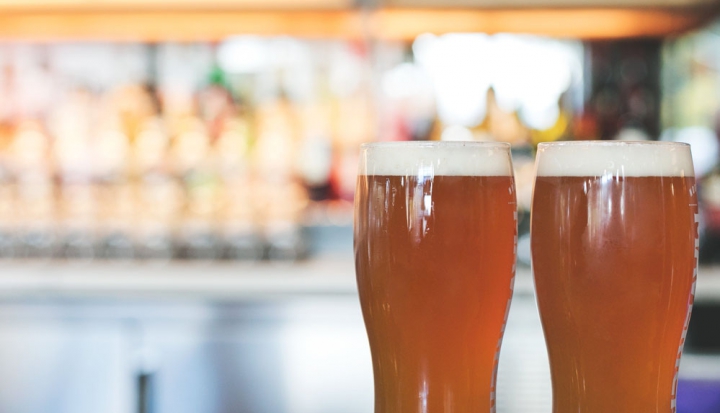 Just like the roads he traverses by car to get to his craft brewery, Jason Elk’s journey to the Catholic Church followed a path stamped with signs. What makes his conversion story so unique are the human signs—the support system—that stood patiently by him but never pushed. All had a hand in leading him to the creation of Chicago’s Karetas, the brewery that is now Elk’s mission.

In 2016, inspired by his faith and commitment to give back, Elk set out to build a high-end craft brewery that stands out in a market steeped in small, quality- and personality-driven beer makers. Karetas, taken from the Latin caritas, which translates to “charity,” donates 10 percent of its profits to charities and is the living embodiment of Elk’s Catholic faith. The timing of this very unique brewery, just as the timing of Elk’s conversion, was everything.

Elk’s Cincinnati upbringing was grounded in academics. He was raised Protestant and, “like a lot of Protestants, raised with a strong foundation, but the level of commitment wasn’t there,” he says. That started to change when he met his future wife, Sarah, at Northwestern University in 1998. “The story of patience and love starts with her,” he said in a moving speech before the Young Professionals of Chicago in 2017. Sarah was raised Catholic and together the couple attended Mass on Sundays.

After graduation, their journey led them first to New Jersey and then to Stanford University Graduate School of Business, where Elk, the scientist, saw his career start to take off. He worked at Oracle Corporation, led projects for Fortune 500 companies, and served as CEO of InterPrint, LLC. At Stanford he met Jim Tierney, a devout Catholic in whom Elk found a role model in faith.

Although Elk may not have known it at the time, the seeds of Karetas were germinating. The now-father of four was learning more about Catholicism from the faith-based life he and his wife were building and the Masses that were rooted in their lives. But Elk still had questions that made conversion elusive.

“I saw people convert because their wife or spouse wanted them to. I moved forward with the thought that I have to find the right moment,” he says. “Everyone was patient with me. Nobody ever said to me, ‘You need to be Catholic.’ ”

His entrepreneurial drive was taking root too, and while he says he enthusiastically bounced many ideas off of Sarah, she wasn’t sold until Karetas. To that idea, she gave an unequivocal thumb-up. “I’ll make beer in traditional ways in the names of saints and impact charities. [And] I can get people on the path by drinking something special,” he told Sarah.

Of Elk’s own spiritual path, to reach conversion and the christening of his brewery, there were still things to learn. When his cousin was critically injured in a skateboarding accident and wasn’t expected to survive (but did), he learned the transformative power of prayer.

When his close friend Jim Tierney, a father of nine who had been a guiding force since the early days at Stanford Business School in 2001, was diagnosed with stage 3 melanoma, Elk found himself questioning the nature of pain and suffering. He again turned to religion—and Father Juan Vélez, a Catholic priest in the Prelature of Opus Dei. The priest’s wise words, along with the family’s move back to Chicago, helped pave the way for Elk’s full embrace of Catholicism in 2014. And set the wheels in motion for his Chicago-based brewery.

Karetas is Elk’s faith in action: “It all goes back to being a good example for Christ,” Elk says. Inspired by a visit to Three Floyds Brewing Company in Munster, Indiana, Elk sought to make premium, limited-run beers that in the end benefit humanity. Ten percent of the proceeds from each beer—all, like the flagship Archangel M. Tripel (an homage to St. Michael), are bottled with a label that honors a Catholic saint—to charities that support military veterans, children, the homeless, and many others.

There is plenty of need in the world, and Elk wants to make more of an impact. “I get excited to see the money going where it needs to go,” he says. “I’ve come to the conclusion that people care about your mission after they taste the beer, [and] I’m here to make great beer and help end suffering.”