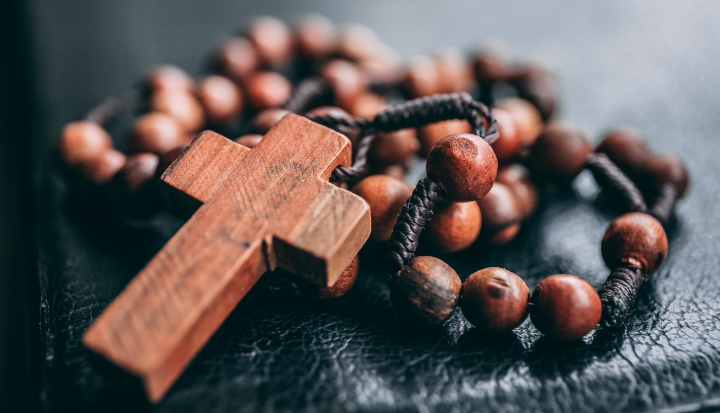 When I made my final profession as a Benedictine oblate last summer, Brother Luke, one of the monks at the monastery I’d just pledged myself to, gave me a welcome-to-the-community gift: a hand-tied prayer rope of 33 knots (one for each year of Jesus’ life) with a small Byzantine cross attached. (Brother Luke’s grandparents were Byzantine Orthodox, and he nearly joined a Byzantine monastic order before settling on the Benedictines.) I was unfamiliar with prayer ropes at the time but thought it was a sweet gift. It didn’t take long before I realized that it was actually an extraordinary gift.

The prayer rope stems from hesychasm (“stillness”), an Eastern Orthodox mystic tradition of contemplative prayer whose central element is the ongoing repetition of the Jesus Prayer: “Lord Jesus Christ, Son of God, have mercy on me, a sinner.” The rope helps the person praying keep focused and keep track of the repetitions, especially at the beginning. I said my first 33 down in the crypt of the monastery before the tabernacle; I did 99 on the bus back to the city; I usually get in at least 66 before Mass. I go “off-rope” as I move about my day, repeating the prayer between tasks at the office, on my lunch break, on the train. The idea is that eventually the prayer will become automatic, that it will wear a groove into my soul, become an echo of my heartbeat. That it will open me to the divine.

The origin of the prayer, however, reaches much farther back than Eastern Orthodoxy. When, in 380, Christianity was declared the official religion of the Roman Empire, it was a paradigm shift for the Empire and, for Christians, an existential shock. Being a Christian went, in a very short time, from being something that could land you in the lion’s den to something that could land you a fairly cushy imperial appointment, from a profound engagement with the depths of mystery to, for many, a nominal commitment whose depth could be attuned to the shallows of the individual believer. But the newfound respectability didn’t sit well with everyone and, ironically enough, just as the world accepted Christianity, a goodly number of Christians rejected the world, taking to the deserts of Egypt, Palestine, and Syria and establishing the spiritual dynamic and ascetic practices of Christian monasticism.

The desert fathers and mothers took particularly to heart St. Paul’s urgent admonition, appearing in letters to four different communities, to “pray constantly” and came up with various strategies for heeding it: praying all 150 psalms in one day, saying the Lord’s Prayer in sets of a hundred. The overarching goal was to attain interior stillness (as one of the desert fathers put it, “People are like a shaving of wood curled around its central emptiness”)—a stillness filled with prayer. The repetition of short passages of scripture became a common and effective means of maintaining mindful prayer throughout the day (and, some monks maintained, even in their sleep). It was from this tradition that the Jesus Prayer emerged.

The first written record of the prayer appears in a fifth century letter of St. John Chrysostom, where the formula given is “Lord Jesus Christ, Son of God, have mercy.” In the sixth century, Abba Philimon, an Egyptian Desert Father, gives the final phrase as “have mercy on me.”

Sometime after these ancient formulations, “a sinner” was added, and today the prayer is commonly regarded as “Lord Jesus Christ, Son of God, have mercy on me, a sinner.” Though not a direct quote from scripture, it incorporates elements from the plea for healing in several miracle stories (e.g., the Canaanite woman seeking help for her daughter, the 10 lepers, the blind beggar Bartimeus), while the “. . . me, a sinner” is a clear echo of the parable of the Pharisee and the publican.

As I repeat the prayer, then, it’s an intrinsic reminder that I worship a God of compassion, of healing, of miracle: a God who loves me not in an abstract way, but in the nuts and bolts, the infinite practicality of my human existence, and the depth of my human need. It’s also a profound—and profoundly humble—recognition of my relationship to the divine. If I really have any sense at all of who and what I’m really talking to—and of who and what I really am—the only possible thing to ask for is mercy. This sense of my creatureliness is also known as the fear of God. It’s one of the gifts of the Spirit. It’s the holiest fear I can have.

And the heart of the Jesus Prayer, its true power, is of course its invocation of the name of Jesus. For the anonymous author of The Way of the Pilgrim, the classic text on the Jesus Prayer, “the Divine Name of Jesus Christ contains all the truth of the Gospel.” When we invoke the name of Jesus, then, it opens us up to a web of relationship so deep and so vast as to be the very texture of existence. It invokes all of creation, all of time, every moment of my life that has whispered the name, shouted it, every moment that has muted it, all of salvation history, all that is known, all that is utter mystery: Jesus.

The chief challenge of the Jesus Prayer—and of repetitive prayer in general—is the concentration it requires to pray it properly. Brother Luke taught me to say it slowly, to savor each phrase. There’s a wealth of theology in every single word. More, there’s a wealth of grace. He told me to avoid imagery, stay empty, to focus on my heartbeat. Another name for the Jesus Prayer is the Prayer of the Heart. More accurately, it’s the name for the graced transition from conscious repetition to prayer that is matched to your every heartbeat, your every breath.

And while concentration is one of the prayer’s challenges, it’s also one of its greatest gifts. For “when we begin to concentrate,” The Way of the Pilgrim promises, “when we return within ourselves and become more sensitive and subtle in the mind, then the soul fulfills its purpose and unfolds its highest power.” That highest power is union with God. It is by no means the peculiar spiritual province of desert ascetics. On the contrary, it’s the birthright and goal of all Christians.

Besides, we all have our own deserts, our own brushes with ecstasy, our moments when the plea for surrender at the heart of us is abruptly answered by a wave of grace. Saying the Jesus Prayer on the subway to work one morning, on some repetition of the name, some inhale, some exhale, it suddenly opened up for me—or, more accurately, caved in: The sounds folded in on themselves creating an infinite regress, a vortex that at first felt like a vacuum but then took on overwhelming fullness and light of being itself.

They announced my stop. I got up; I got off. I moved through the same station, the same New York streets. But I kept saying the prayer—and moved through a world now subtly transfigured by the living presence of Christ.