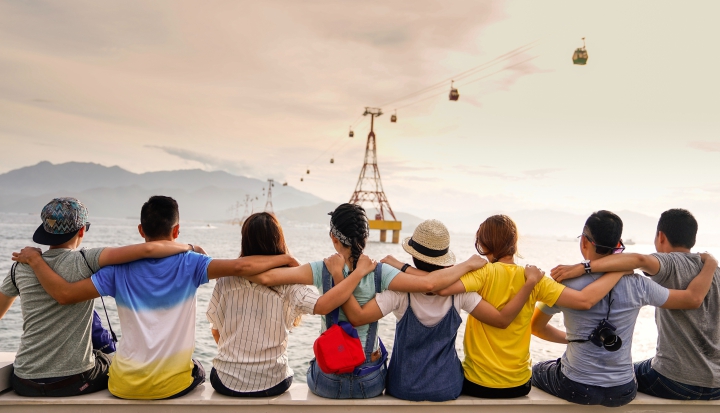 This love one another stuff always confused me.

When the priest would call the congregation to love one another during Mass, I was one baffled kid. Although the Bible, Sutras, Quran, Vedas, and Talmud all say the same thing—love is good—every friend of mine was taught that sex was bad. Confusing for a child still 10 years away from studying logic with Jesuits.

As near as I could piece together, loving one another didn’t mean, you know, actually loving anyone—that was a sin. Some other kind of loving was the religious kind, but at 8, I could not imagine how to practice it. Or if I even wanted to, if it meant I had to be super nice to the snotty girls in the back row of my third grade class. Ew.

Today, when tragedies strike as they do now far too often, social media becomes instantly peopled with memes and messages entreating us to love one another. Often, what we really mean is “Please don’t shoot us,” but we haul out the old chestnut of brotherly/sisterly love, as though we know what we mean when we say this to each other.

Left to our own devices, humans do eventually get around to crossing oceans, invading countries, conquering tribes, colonizing indigenous peoples, being invaded and conquered and colonized ourselves, forming previously forbidden romantic alliances, mixing up the gene pool, and birthing babies who illuminate (and who must navigate) the painful complexities humans create around ideas of who is “us” and who is “other” and why anyone ought to care in the first place. We us/other ourselves into states of high agitation around differences in sexual desire, religious belief, hair texture, height, and gender.

What we define as “race” is actually geographically contained phenotypical characteristics that, if mixed with other contained pockets of DNA, blur the boundaries of who looks like whom and within this century will surely create gorgeous human combinations of wonderfulness that may or may not possess really big ears (just throwing my own family DNA in there).

Being multiracial is what most people are in Latin America and the Caribbean, and it is darn common in large chunks of Europe, Africa, and Oceana. America comes late to officially recognizing that people of different races fall in love and make babies, having only offered multiracial boxes to check in the 2000 census. In 2010, 9 million of us self-identified as being more than one race. Maybe it’s time to stop constructing boundaries when they are so readily permeable.

So far, checking multiple religion boxes is not an option, although many of us—and here, I mean the world-wide “us” of mammalian, bipedal folks with consciences—have parents whose parents raised them in two different traditions. We mixed-religion children grew up in households where Lutheran and Catholic or Jewish and Muslim or Hindi and Methodist practices had to be blended and reinvented around the kitchen table and performed creatively at bedtimes and holidays. We said the Our Father one way with Grandma A and another with Grandma B, decorated Hanukkah bushes with tinsel and dreidels hung on strings, and prayed to the Mother-Father God from prayer rugs facing Mecca.

So is that what loving each other means? To know that humans are of many races, that they seek their gods and goddesses in many forms, and that some of us love the “other” instead of the “us”?

I think we know that. The state of our culture and our world does not arise from a lack of knowing. I’m not even sure it’s from a lack of tolerance. I think it might just be that we don’t love ourselves deeply enough.

If I love all the selves housed within me, including the flawed, human, insecure ones, then why would I need to hate you? If I can accept, tolerate, and nurture myself, why would I feel threatened by you? If I believe I am enough and acceptable just as I am, then I need not prove myself superior to you, proselytize to you, or judge you.

Now, I don’t mean that I have nothing to learn and am the most mature and evolved human on the planet, although I am fairly charming. I am evolving, growing, learning, and any day when I resist those activities is a day of reduced joy. I am a college professor, and being among young people who are committed to refining and reinventing themselves is wildly energizing and, yes, spiritual. I highly recommend it.

And, I don’t mean that if we all just bucked up and felt great about ourselves, then mental illness and oppression and inequity would all disappear. I am not naïve or overlooking the nuances and complexities of being human. Enhancing one’s self-respect isn’t going to remedy every wound suffered in this world, and there’s the tragedy of it. But if we created societies and cultures that nurtured children with education, food, and health care; that did not report in 24/7 media everywhere that we are too fat, too dark, too wrinkly, and too ugly to have worth and value; and that protected the vulnerable because humans are built to do that for each other, then. Oh, then. Then, we might see fewer hate-contorted faces at neo-Nazi rallies, fewer pipe bombs sent through the mail, fewer school shootings, fewer suicides.

I do mean that even as we imperfectly move toward full maturity, we are still so darn cute. We are delightful and deserving of love. We should smile back in the mirror now and then. We do not have to prove to ourselves that we have a right to be here. We are here. Ta-da! Toddlers are terrific teachers of this concept, by the way, having been exposed to fewer deprecating forces than those of us who are fully grown. Hang out with an 18-month-old and then get back to me.

If I treat myself with profound respect, if I dare to be kind to myself, and if I exist within a society that values each of us, then I don’t need to make you into something less so that I feel like something more.

We are worth something—we are worth a great deal—to ourselves and to each other. If we knew that, if we fully accepted it, we might heal.

Perhaps the most godly expression of self-love is the gift it delivers of recognizing ourselves in each other. There you are. I see you. Why, hello.

If we love ourselves better, I think the world might just shift on its axis. It won’t fix everything, but it might fix a lot.